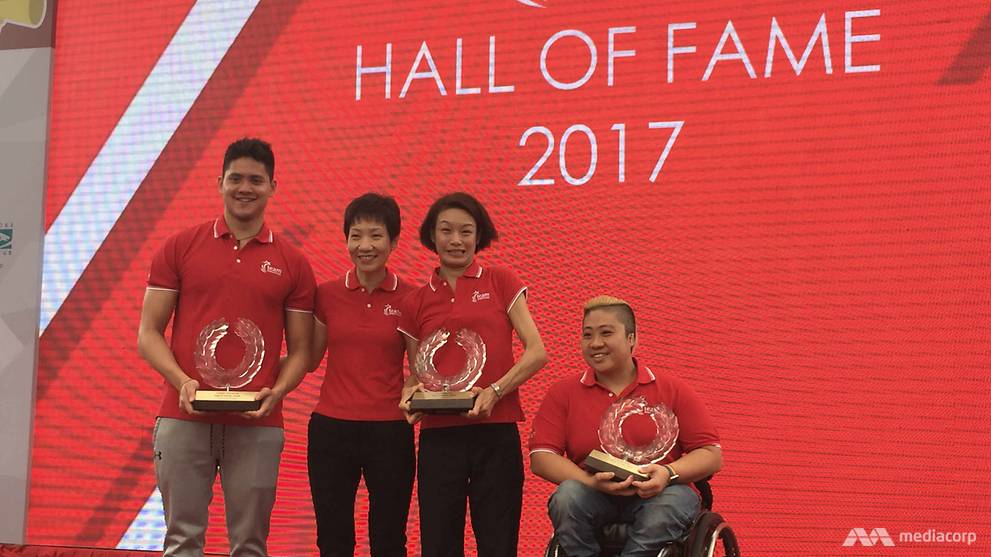 SINGAPORE: National swimmers Joseph Schooling and Theresa Goh, as well as equestrian Laurentia Tan, were inducted into the Sport Hall of Fame on Tuesday (Aug 8).

Established in 1985, the Hall of Fame honours Singapore's top athletes who have "excelled in their sporting performances and instilled national pride among Singaporeans", Sport Singapore and Team Singapore said in a press release.

Schooling made history when he won Singapore’s first-ever Olympic gold medal in the men’s 100m butterfly at the Olympic Games in Rio last year, setting a new record for the Games in the process.

The national swimmer said it was an "utmost honour" to be inducted into the Hall of Fame at 22. "This is not a recognition for my personal achievements but also for the unwavering support from my family, friends and coaches who have contributed to my sporting journey ... I hope to be able to continue breaking new grounds to keep the inspiration alive, to encourage the next generation to believe in dreaming big and making them a reality."

Olympic medallist Joseph Schooling holding up a plaque at his induction into the Sport Hall of Fame. (Photo: Chelsea Fuchs)

Goh, who was born with congenital spina bifida, scored a bronze in the 100m breaststroke SB4 final at last year's Paralympic Games in Rio. Her heats timing of 1:54.50s was an Asian record.

The 30-year-old said: "It's truly an honour to be inducted into the Sport Hall of Fame, to be amongst some truly amazing people who have played a huge part and who still continue to play a huge role in Singapore sports today."

The 38-year-old equestrian said: "To have my sports career and its legacy forever be a part of Singapore's history is an amazing honour and very, very humbling. I feel really blessed."

With their induction on Tuesday, Goh and Tan join Yip as the only para-athletes in the Sport Hall of Fame.