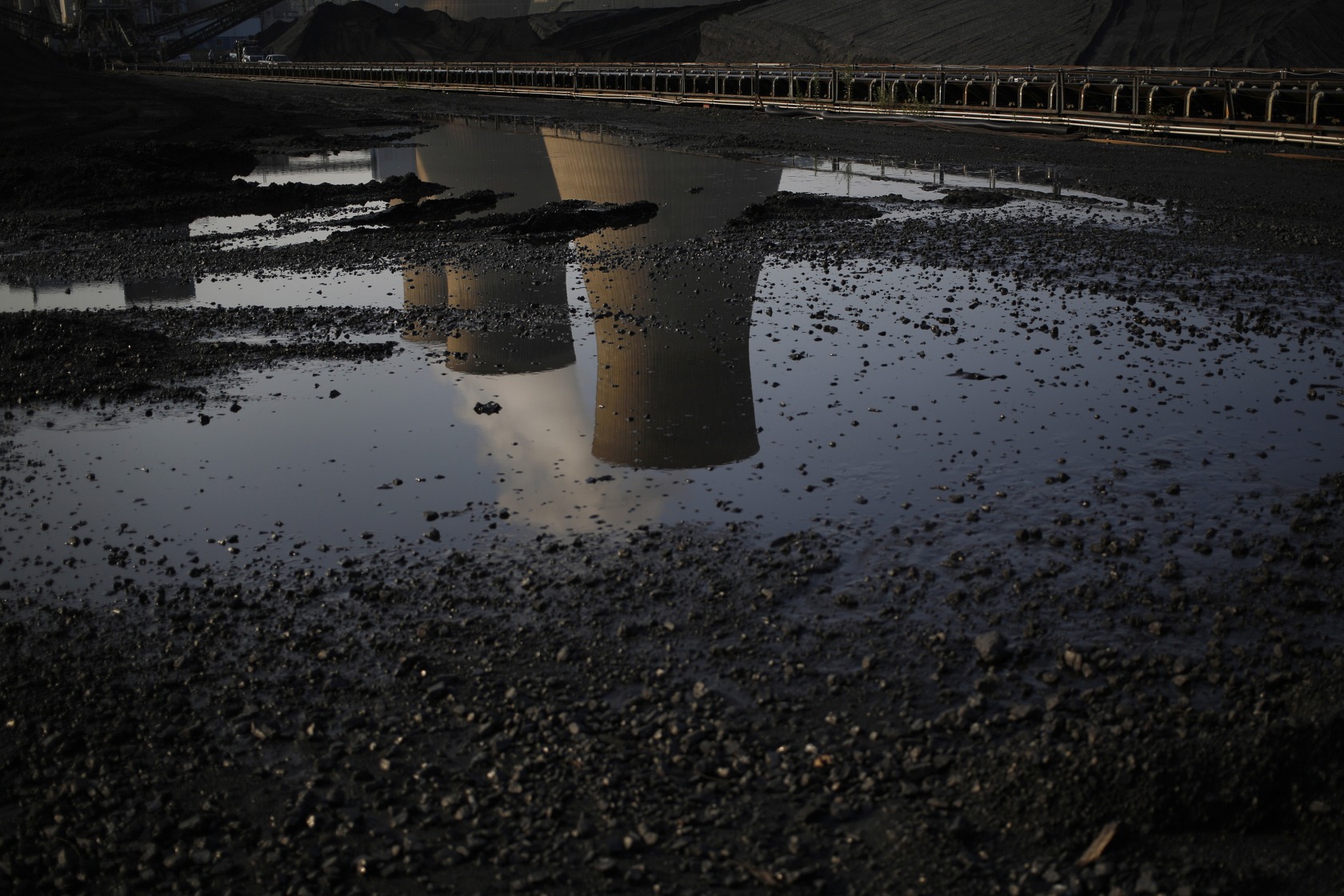 Coal Plants Might Be Even More Toxic Than We Thought

Scientists studying the aftermath of a massive coal-ash spill in North Carolina have discovered a byproduct of the fossil fuel that may pose human health risks.

Duke Energy Corp. announced in early February 2014 that drainage from a broken pipe was leaking coal-ash into the Dan River, which runs through Virginia and North Carolina. Within a few days, researchers at Virginia Tech realized the spill created an unusual opportunity to better understand how particles just billionths of a meter wide, notably arsenic, embedded themselves in an ecosystem. They published that work in 2015.

Then came the surprise.

Electron-microscope analysis of sediment samples revealed a strange-looking substance, streaked in a pattern that called to mind zebras, according to Michael Hochella, a distinguished professor at Virginia Tech concentrating in nanogeoscience.

Residents look from their yard across an ash pond full of dead trees toward Duke Energy's Buck Steam Station in Dukeville, North Carolina, on April 25, 2014.

“It was just scientific curiosity,” Hochella said. “What the hell is this stuff?”

Whatever it was and wherever it was from, it appeared downstream of the spill, not upstream. Eventually, they found it in coal ash and were able to reproduce it in a lab.

Air pollutants are the result of impurities in coal that, once burned, can become air- or water-borne hazards, including soot, sulfur dioxide, nitrogen oxides and mercury, all of which are regulated in the U.S. This stuff kills or sickens people. Air pollution contributes to an estimated 3 million deaths every year, according to the World Heath Organization. Another estimate put that figure at 1.6 million alone in China, which is boosting natural gas use and renewables to reduce harm to public health from coal.

The newly identified material, made of titanium and oxygen, had been produced experimentally in labs as early as the 1930s, but it is extremely rare in nature. The Virginia Tech team sought out coal-ash samples from states, including Virginia and Illinois, and from as far away as China. Sure enough, they found “titanium sub-oxides” in 22 samples. They suspect that in the U.S., scrubbers mandated by the Environmental Protection Agency capture the material, reducing its prevalence. Dust analyzed from Shanghai sidewalks, streets and standing water contained the material, according to their research, published Tuesday in the journal Nature Communications.

Coal contains from 0.1 percent to 6 percent titanium dioxide, the same chemical that’s commonly used in sunblock, makeup, and paint. This substance has drawn scientific scrutiny in recent years for potential health hazards on the nano-scale.Testing the titanium sub-oxides on zebrafish (the aquatic cousin of lab rats) showed it to be toxic when ingested; the toxicity was significant in tissue not exposed to sunlight. Analogous effects in small-to-large animals, including humans, “are likely to be found,” the authors concluded. Research will turn to that question next.

Searching for human health effects exposes a paradox between how science is conducted and what society allows industry to pump into air and water, according to James Kubicki, chair of the department of geological sciences at University of Texas-El Paso, who didn’t participate in the coal-ash study. It’d be unethical to test a substance on human subjects, because it might sicken or kill them. And yet, “in the real world, we’re doing that all the time,” he said.

The study doesn’t mention Duke Energy by name. Jeff Brooks, a spokesman for the company, contends that water quality near the coal-burning plant is good and local agriculture and wildlife weren’t affected by the spill. The company is conducting a widespread cleanup of its coal-ash facilities.

There’s still lots of work to do gathering evidence about the titanium sub-oxides’ prevalence and toxicity in humans. The authors of the new paper wrote that their work “has not been formally reviewed by EPA.”

Potential health effects are front-of-mind to the scientists, but the discovery may have another implication as well. Given how rare the new titanium materials are in nature, documenting where they turn up may give researchers a “tracer” for coal-burning and the production of coke, used in steel-making. If previous experience holds, they expect they’ll find the stuff all over the Earth, including Antarctica, half a world away from most of the world’s coal plants.