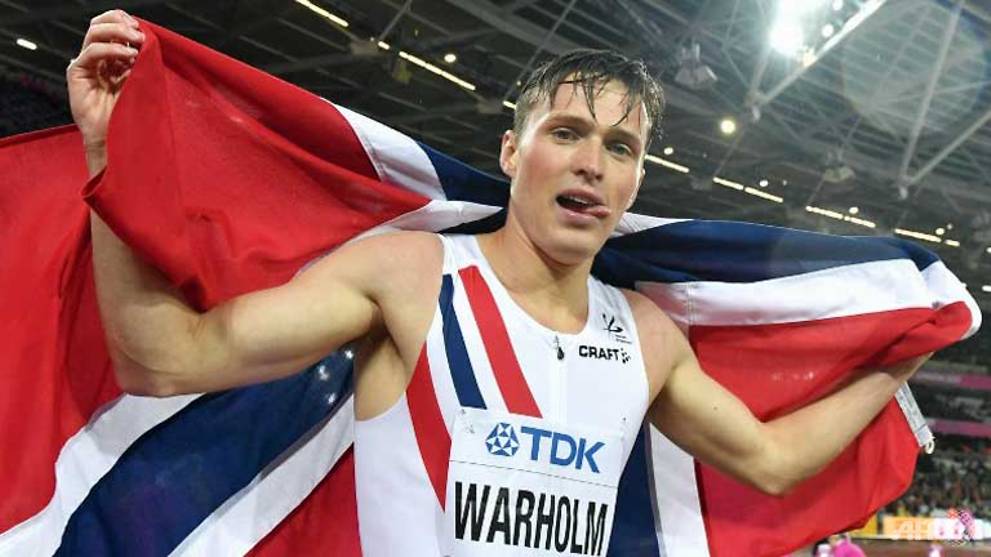 Athletics: Warholm screams to victory on night of shocks

Warholm, a baby-faced 21-year-old, led from start to finish to beat one of the all-time greats in the 400 metres hurdles Kerron Clement and give Norway their first gold in the event.

Clement, bidding to become the first man to win the hurdles world title three times, had to settle for bronze.

"I truly don't believe it," gasped Warholm, who put his fingers round his mouth after crossing the line, apeing the famous painting 'The Scream' by Norwegian artist Edvard Munch.

"I've worked so hard for this but I don't know what I have done. This is an amazing feeling. I'm world champion, that's crazy."

Francis's victory was even more surprising as the American, fifth in the Olympics last year, looked set for a minor medal at best with Bahama's Shaunae Miller-Uibo set to add world gold to her Olympic crown.

However, the Bahamian tied up dreadfully in the final 20 metres and it was Francis who breasted the line in first with her legendary compatriot Allyson Felix third.

"At the finish line I was surprised, I thought I was second or third, but then they told me 'you are first'. That is crazy," said 25-year-old Francis.

Miller-Uibo stumbled over the line and then collapsed on the track with not only her dreams of 400m gold having been shattered but also of doing the 400m/200m double.

For two other athletes though the dream double remains on course with Britain's Mo Farah and South Africa's Wayde van Niekerk reaching the 5,000m and 200m finals respectively.

However, they got to them in very different styles

The 34-year-old Farah - who won the 10,000m last Friday - looked at ease in finishing second in his semi-final as he bids to bow out of championship track running with his fifth successive global title double.

400m world champion Van Niekerk, though, struggled into the 200m final by virtue of being the second of the two fastest losers - just 200th of a second ahead of France's Christophe Lemaitre.

"I knew it would be a tough challenge," said Van Niekerk, who is bidding to emulate the legendary Michael Johnson's 200m/400m double in the 1995 championships.

"To see my name in the final is a real pleasure. I've got time to recover now and give it my all in the final."

Looking especially dangerous is Botswanan Isaac Makwala who but for being barred from the 400m final because he had been diagnosed with the highly-contagious norovirus could have been contemplating the double himself.

The 30-year-old, who has late in his career surged into global medal contention, came through two 200m on Wednesday - one a solo time-trial as he had been barred from the heats on Monday.

Makwala admitted to being heartbroken at missing out on the 400m adding: "I am running with anger".

China got their first gold of the championships as Gong Lijiao ended years of near-misses in finals to take the women's shot put in a competition that failed to catch fire although the torrential rain didn't help.

"It is 26 years since China won a shot put medal, so it's a very special moment for me," she said.