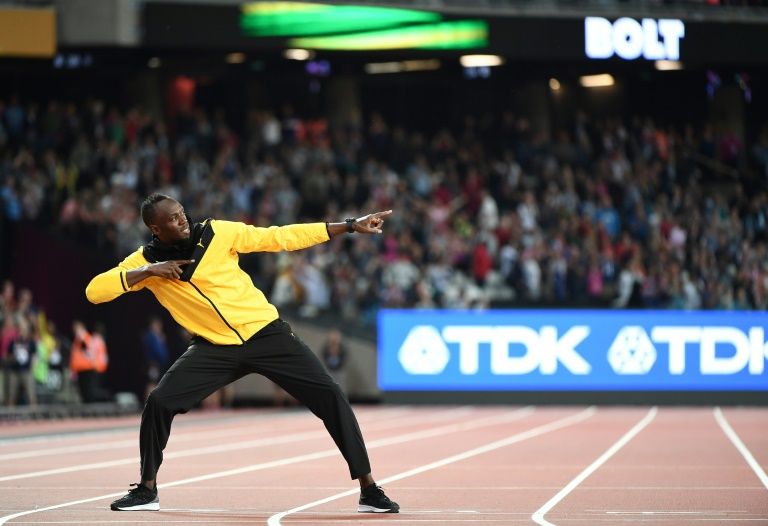 Athletics greats Allyson Felix and Caster Semenya lit up the track to bring the curtain down on the world championships in great style on Sunday.

However, not for the first time, but certainly the last as an athlete, Usain Bolt stole the show.

Retiring superstar Bolt put on one last appearance, the 100m and 200m world record-holder accorded a lap of honour in front of the 60,000 spectators who stayed on after the finals were over.

"It's been a rough couple of days, and this is a very emotional moment for me," said the 30-year-old Jamaican referring to his dramatic collapsing to the track with cramp in the anchor leg of the 4x100m relay final 24 hours earlier.

"I always tried my best and gave 100 percent all the time and above all put on a good show."

Bolt then went on a lap of honour to the tune of "Reggae Nights" raising his arms and applauding the crowd, embracing his parents on the track and then finishing with a final flourish of his trademark 'lightning bolt' stance not once but twice.

On the track, Felix ran a stunning leg in 48.7seconds in the women's 4x400 metres relay to set the United States up for an easy victory and take her record world medals tally to 16, two ahead of retired Jamaican duo Merlene Ottey and Bolt.

"It does mean so much to me every time," Felix said when asked whether medals motivated her.

"I love this sport. I'm grateful to run with these amazing girls. They work so hard and deserve all their success.

"It's an honour to run in the relay for Team USA and I will always treasure these moments."

South African star Semenya, who seems to block out all the debate about whether she should be running or not, added a third 800m crown to her tally to put her alongside another African great Maria Mutola as the only women to have won the title three times.

Semenya hinted that it would now be time to tackle the world record of 1:53.28 set by Jarmila Kratochvilova back in 1983.

"We need to clear 1:55 first and it will require a lot of hard training. I have Olympic, world and Commonwealth titles now so maybe it is time to target the world record," said Semenya, whose last defeat in the event dates back to 2015.

"It's the next thing on the list. I know it will be difficult but I will have to attempt soon, maybe."

Kenya enjoyed a successful final blast with Hellen Obiri comprehensively denying Alamaz Ayana a double gold as the 27-year-old Kenyan burnt the 10,000m champion for pace down the back straight of the final lap to ease to the 5,000m title.

Her compatriot Elijah Manangoi led home a 1-2 in the 1500m to turn his silver from 2015 into gold this time round but Asbel Kiprop never looked at the races for a fourth successive title and finished down the field in ninth.

"It was just such a good race and I'm so pleased to be a world champion. I had a difficult race as Timothy (Cheruiyot who is also his training partner) raced very well but I had that extra strength," said 24-year-old Manangoi.

"We have had very good champions in the event over the years so it is a proud moment for me to win this title for my country."

The Americans may have dominated the 10-day competition but there was to be no final flourish as Trinidad and Tobago's men's 4x400m relay team ran superbly to take the gold and bring the curtain down on a championships that never failed to surprise.