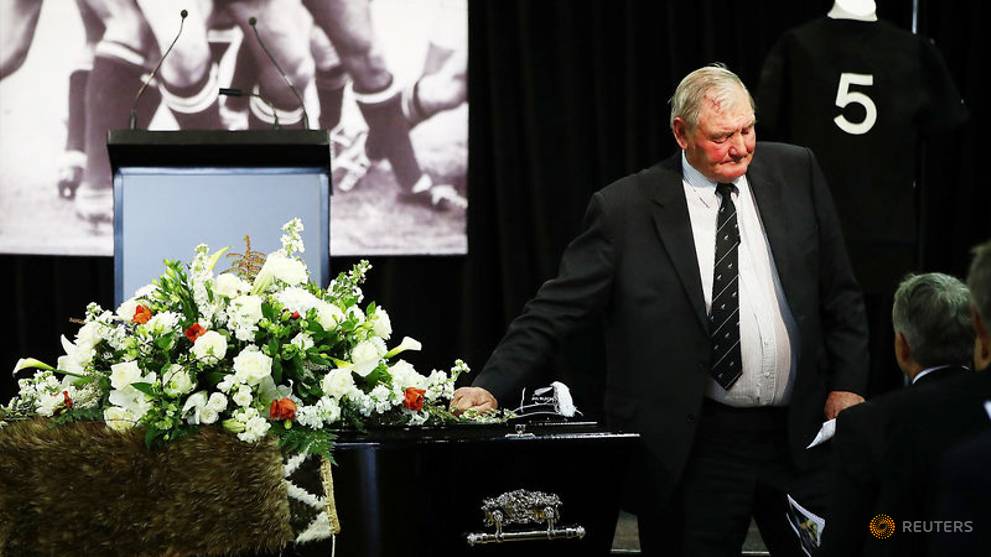 All Blacks great Colin Meads was a supremely competitive family man who was passionate about New Zealand rugby, yet would faint at the sight of blood and even learned to knit as a child, his brother Stan said in a eulogy to the former lock on Monday.

WELLINGTON: All Blacks great Colin Meads was a supremely competitive family man who was passionate about New Zealand rugby, yet would faint at the sight of blood and even learned to knit as a child, his brother Stan said in a eulogy to the former lock on Monday.

Meads, who in 1999 was named New Zealand's greatest rugby player of the 20th Century, was diagnosed with pancreatic cancer last year and the former lock died in hospital in his home town of Te Kuiti on Aug. 20.

"Every fibre in his body was competitive," Stan Meads, a fellow All Blacks lock, told a funeral service in their home town on Monday. "Be it marbles or when we were kids and someone would say 'I'll race you to that tree there', it was on.

"He didn't believe in coming second. That wasn't part of Pinetree's makeup," he added, referring to his brother's nickname.

The small town in the King Country in the centre of New Zealand's North Island came to a virtual standstill for the funeral, with politicians, former All Blacks and administrators flocking to pay their respects to Meads.

Several hundred mourners packed into the community's Les Munro centre, with a large marquee set up across the road to accommodate the overflow of roughly 3,000 people in attendance.

English, who launched the ruling National Party's campaign in Auckland on Sunday, did not speak at the funeral but said he had attended to pay respects for what Meads had done for New Zealand.

"He represented something very special about being a Kiwi," English said in a statement before the service.

Meads' coffin arrived at the service in a hearse decorated with a specialised "Pine T" licence plate, a nod to the moniker he preferred to be known by even after he received a knighthood.

Stan Meads said that while his older brother had always been physically strong, tough mentally and ultra competitive from a young age, he would faint at the sight of blood.

"He recognised that if he wanted to go far in rugby then he better sort it out," he said to laughter from the crowd.

Their parents had tried to encourage them to read books as children, but he refused to do so, so their mother had taught Colin to knit to keep him occupied, he added.

"Yep, Pinetree used to knit. He knitted a jersey and a balaclava," he said, again to much laughter.

An emotional Brian Lochore, whose career was intertwined with Meads, said New Zealand had lost a champion for provincial rugby in the country.

The country's amateur provincial competition teams, made up of mostly rural provinces, play for the Meads and Lochore Cups.

"Nobody has done more for New Zealand rugby than Colin," said the fellow All Blacks great. "I've lost a friend. New Zealand has lost an icon.

"He was the player of the century and I don't think anyone would argue with that.

"He was incredibly strong and mobile for a man of his size. He was ahead of his time. No forward until that point had ever run as well as Pinetree. He would be great in the modern era."

While Meads was recognised for what he contributed to the All Blacks legacy and global rugby, speakers also touched on his community work and his devotion to his family. All five of his children and 12 of his 14 grandchildren attended the funeral.

"We have shared Dad with New Zealand and the rugby world," his youngest daughter Shelley Mitchell said.

"None more so than this week where we have seen the outpouring of love and tributes and that has helped us get through this week.

"After hearing all that, it has been an honour of sharing him with you... thank you for loving our Dad."