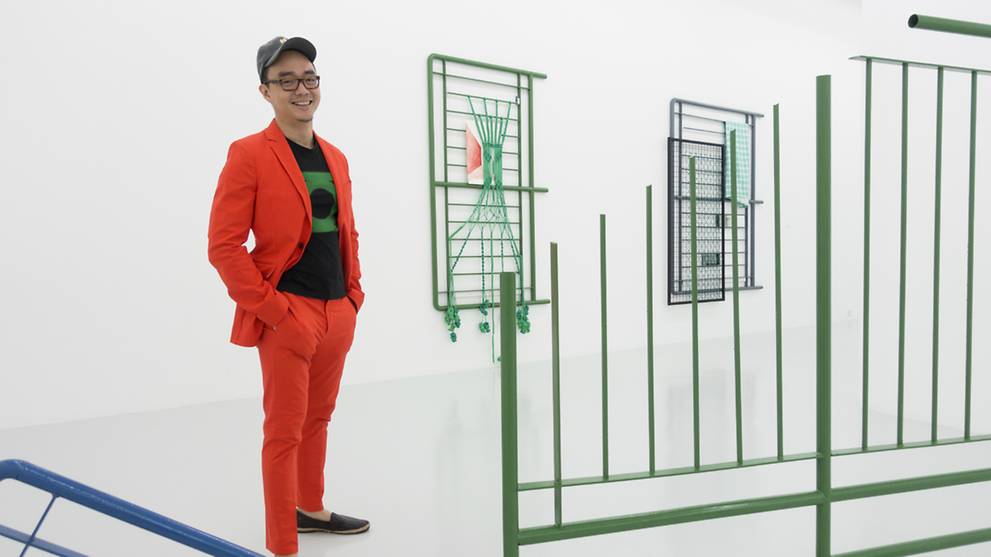 From streets to art gallery: Singapore’s familiar green railings are the subject of a new show

In artist Jason Wee’s ongoing exhibition that tackles the literal and metaphorical fences in Singapore society, these ubiquitous structures are turned into a labyrinth and hung up on walls.

SINGAPORE: Many Singaporeans may not give a second thought to the ubiquitous green railings found along pathways and roads, but artist Jason Wee has taken these off the streets and into the art gallery.

Visitors who step inside Yavuz Gallery at Gillman Barracks can see some of these structures hanging on the walls as part of the 38-year-old Singaporean’s ongoing solo exhibition Labyrinths, which runs until Sep 17.

Wee is using these everyday objects as “frames” for his assemblage sculptures, which he hopes would raise issues of control, navigation and authority by way of fences – both literally and figuratively.

“I live in Tiong Bahru and I’ve started to notice how, for all kinds of reasons, such as safety and security, they’ve put up fences everywhere,” said Wee.

“If they don’t want people to cross the road at a certain point, they’ll put up a fence. Or, where there’s a small longkang (drain), there’s now a fence when, in the past, they would just let you figure out on your own how to navigate (around it).”

But the exhibition is more than just about pedestrian rules and regulations – the artworks also refer to recent hot-button topics such as the Sungei Road Thieves Market, this year’s Pink Dot, and the Oxley Road saga.

“I’m looking at what it feels like to live here during the past two years. There’s so much polarisation taking place, of people taking sides,” he said.

“I’m seeing the language of fences, walls and barricades creep into our language, like the way 377A was talked about as a ‘necessary fence’ to prevent Singapore from going down a slippery slope. Or how there’s a lot of talk about ‘navigation’, needing directions, road maps and sign posts.”

The fences for his Labyrinths assemblages were fabricated from the same workshop that supplies the fences for the MRT, with minor tweaks, he said. Some of them come in the typical municipal green but there are also those in various shades of grey, blue and yellow.

Wee then combined these fences with different objects to reflect the various social issues.

One work, for instance includes a yarn bomb partially spelling out “Out Of The Closet, Into The Cage”, which refers to how different groups reacted to the fence around Pink Dot (there was a group that had “yarnbombed” the fences and another that put up slogans).

Another piece tips its hat to the former flea market at Sungei Road – Wee included the rubber-coated fence that used to mark out the area, as well as the cloth that vendors used to display their wares.

Labyrinths (Open Fire) (left) and Labyrinths (Out Of The Cl_s_et, Into The C_ge). (Photo: Yavuz Gallery)

Some works also include elements that evoke old homes – such as floral curtains and teak-coloured shelving as a nod to the old furniture at 38 Oxley Road. “The house also became a point of division among people,” he said.

Aside from the issues he brings up, collectively, the show has a poetic twist.

“I wanted to use these fences as kind of like panels and pages on which I ‘write’. But instead of using words I mostly use images, signs, symbols,” said Wee, who is also a published poet with a second book in the works.

For the show, he has also created a stylised labyrinth which combines these fences with tactile paving, which are normally seen at MRT stations to assist the visually impaired. He uses the latter as a kind of morse code on the floor, which spells out a line of poetry from local poet Boey Kim Cheng.

“I’m hoping that even though I’m presenting sculptural assemblages, people will also read them poetically,” he said.

While these fences that people encounter everyday may not seem visually poetic to most, its very look is exactly what attracted Wee.

“It’s just so recognisably Singapore to me. Fences are the way control manifests itself in a kind of banal infrastructure, in a very everyday kind of way. After a while, you don’t even notice it anymore, you just follow it. And this way of following what’s laid out to you is, to me, very Singapore.”

it is a smart innovation to make effective use of space