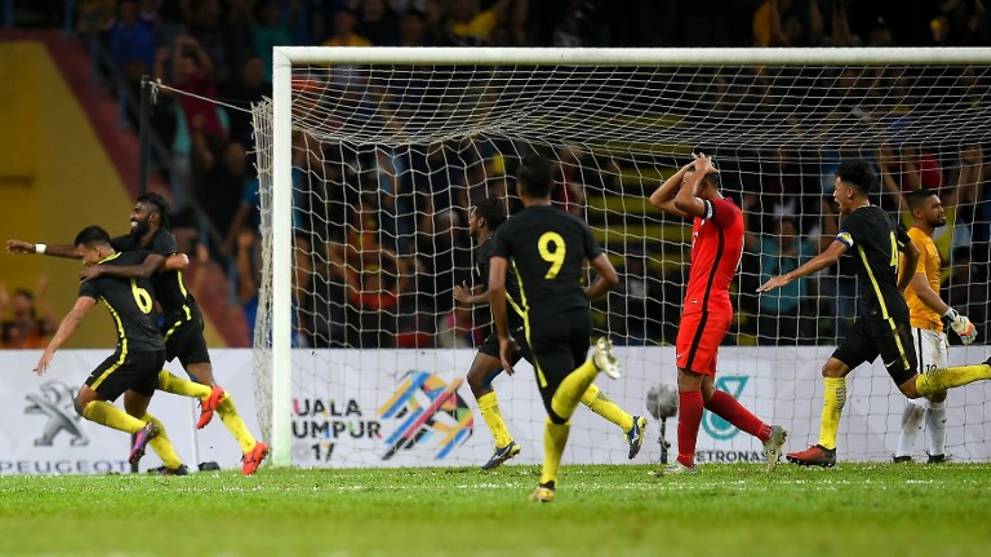 Malaysia's Thanabalan Nadarajah (2L) celebrates with teammates after scoring a goal against Singapore during their men's football Group A round match of the 29th Southeast Asian Games (SEA Games) at Shah Alam Stadium on Aug 16, 2017. (Photo: MANAN VATSYAYANA/AFP)

KUALA LUMPUR: Singapore athletes from big-ticket sports like football and athletics put in a sub-par showing at the Southeast Asian (SEA) Games, said officials at the conclusion of the regional meet on Wed (Aug 30).

The under-23 footballers failed to progress past the group stage, while marathoner Soh Rui Yong and high-jumper Michelle Sng delivered just the two athletics gold medals out of 45 on offer.

"Obviously, we're not happy about football's performance," said Singapore Sports Institute chief Toh Boon Yi. "We all want it to do well, it's our undeclared national sport."

"But we have to see this as part of a long-term process of development - and a lot of work is needed to continue to build the sport ... It doesn't happen overnight, it takes years and multiple Game cycles."

The same goes for athletics, he said.

"We are not pulling our weight here. They need to work on a pathway, maybe a club scene or a national level junior squad."

"In fact, athletics can take a leaf out of what swimming has done. The situation is similar, both have timed events - but in terms of outcome and performance, it's two extreme ends of the spectrum."

Earlier Mr Toh singled out swimming (23 golds) and sailing (4) as stellar examples of what strong leadership and governance could produce.

"It bodes well for us as these are Olympic sports, with young athletes coming of age," he noted.

Overall however Team Singapore's performance at the Games - its best away outing yet - was still lauded as "impressive" and "very encouraging" by officials.

Asked whether this meant that more was to be expected from the athletes at upcoming major Games in 2018 - Commonwealth and Asian - Mr Toh stopped short of committing to a promise but said "we want to do well".

"We are a small country with a small population and small talent pool to draw from," he explained. "Yet we are competing with much larger countries. So our system needs to be stronger."

A good starting point, said Singapore National Olympic Council (SNOC) secretary-general Chris Chan, was to place less emphasis on podium finishes at what he dubbed "entry-level" major meets such as the SEA Games.

"Medals don't mean much here - some of the competitions have only four athletes competing and then you're getting a bronze," he stated.

"NSAs (National Sports Associations) need to instead look at timings and distances and personal bests and so on."

He also weighed in on accusations by Thailand that Malaysia had arranged for the Games programme to include just "sports (that) they are good at".

Mr Chan said Malaysia had largely abided by SEA Games Federation Charter rules of including athletics and aquatics, selecting at least 14 Olympic or Asian Games disciplines, and choosing between two and eight from a bracket of "Southeast Asian" sports.

"The events are the problem," he said, pointing out that the likes of shooting and sailing had drastically reduced the number of medals up for grabs.

"Having said that, I'd like to go back to the federation and highlight some issues - particularly the (arbitrary) changing of rules."

"And the technical delegates here keeping an eye over the competition ... I keep hearing about strange results, scores separated by 0.001 even."

"It's part and parcel of these Games," said Mr Toh. "And our athletes need to take that into their stride."