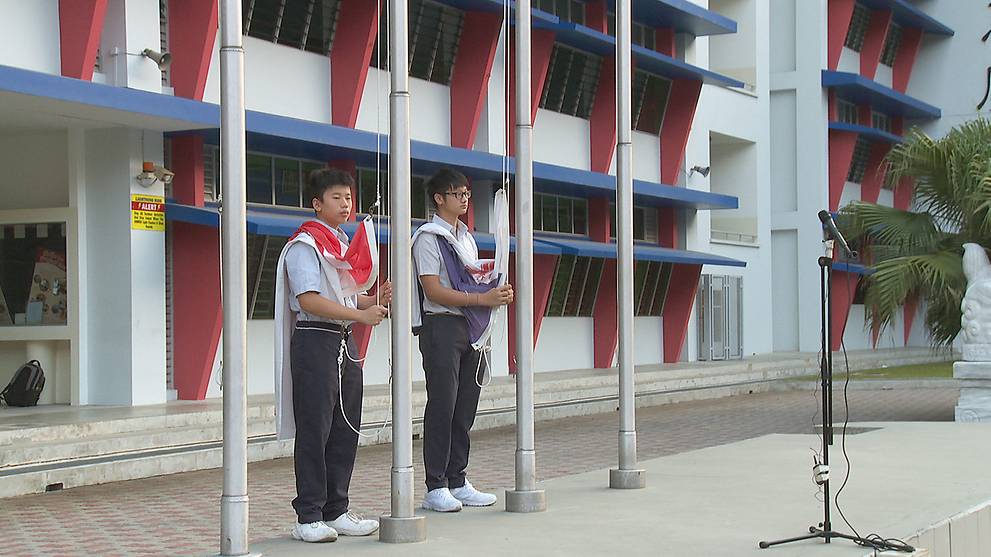 The director tells Channel NewsAsia’s Genevieve Loh that her team “worked hard to find a place for In Time To Come to be shown here”.

A screen grab from Tan Pin Pin documentary In Time To Come, a compilation of everyday public rituals in Singapore such as flag-raising ceremonies and fire drills in schools.

SINGAPORE: Local filmmaker Tan Pin Pin’s latest documentary In Time To Come finally has a Singapore premiere – it will open at Filmgarde Cineplex at Bugis+ on Sep 28.

A feature about the timeless aspects of Singaporean life centred on the opening and sealing of two time capsules, In Time To Come has been lauded internationally as Tan’s most “experimentally daring and genre-bending film” yet.

The documentary has spent the year showing at various international film festivals, including Visions du Réel festival in Switzerland, Hot Docs Canadian International Documentary Festival in Toronto and Sheffield Doc/Fest in the UK. Outside of Singapore, In Time To Come has also sold its Korean broadcast rights to national broadcaster EBS.

Tan told Channel NewsAsia that although touring with the film has been “wonderful”, she was most excited to bring it home to the Singapore audience.

“Singapore is my muse, this film was made largely with Singapore funding and by a Singapore crew and it is also shot entirely in Singapore,” she said. “It is exciting for me to bring it back to show it to the people who supported it, made it, and who live in this city. There are many scenes in it that only people living here will get.”

Known for her discerning documentaries about Singapore, Tan most recently contributed to the historic SG50 omnibus film 7 Letters with her short Pineapple Town. She is also the award-winning filmmaker of Singapore GaGa, Invisible City, the Student Academy Award-winning Moving House and To Singapore, With Love, what is possibly perceived as her most controversial work.

The critically lauded documentary about the lives of nine Singaporean political exiles was not exhibited or distributed in Singapore because it was given the rare NAR (Not Allowed for All Ratings) classification by the then-Media Development Authority in 2014.

Tan told Channel NewsAsia in a previous interview that this new piece of work was “very different in tone and treatment from To Singapore, with Love”.

Now that In Time To Come has finally secured theatrical distribution in Singapore, Tan is “grateful”.

“More than any of my other films, In Time To Come was made for the big screen. I wanted the Singapore audience to have access to the full cinema experience that festival goers overseas had in the film festivals we attended,” she said. “We worked hard to find a space for the film to be shown here.”

Tan’s earlier films Singapore GaGa and Invisible City only had theatrical runs at the Arts House.

“This is the first long film of mine that I have shown in a mainstream cineplex and it is a privilege to have this opportunity,” she added.

For a filmmaker who has long worked tirelessly on documentaries focused on Singapore, In Time To Come might just be Tan’s last, for now.

“This film took four years to shoot, and a year to edit so it may be some time before I return to this topic!” she admitted.

Oh who is she?