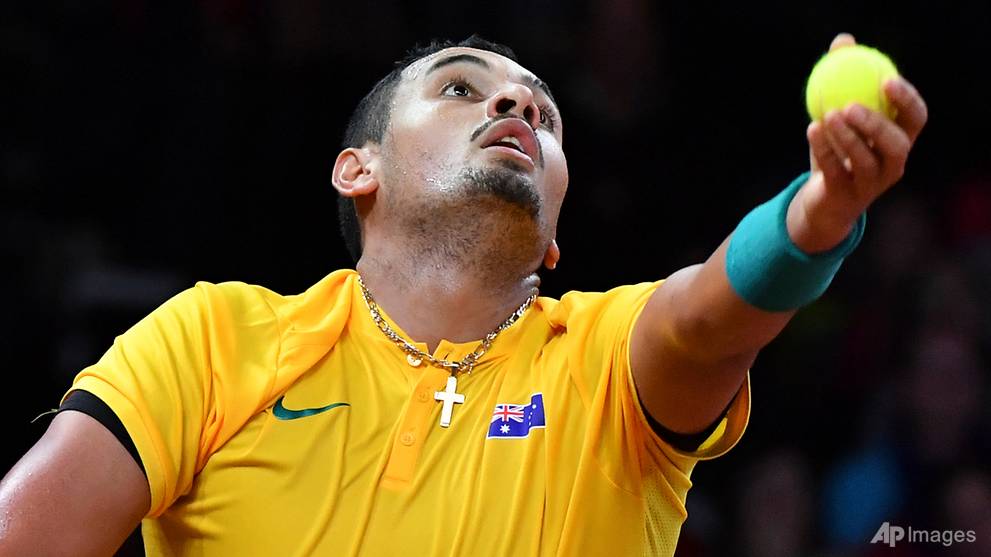 Kyrgios, defeated in the first round of the US Open by compatriot Millman earlier this month, went into the match suffering a hip injury as well as a lack of motivation.

Writing on www.playersvoice.com, the 22-year-old said: "I am not the professional tennis needs me to be".

"I'm not making the improvements I should because I don't want it enough, I'm not taking it seriously enough.

"There is a constant tug-of-war between the competitor within me wanting to win, win, win and the human in me wanting to live a normal life with my family away from the public glare."

However, he was overjoyed by his performance in Brussels as Australia, the 28-time champions, seek a place in the Davis Cup final for the first time since they last won the title in 2003.

"(Captain) Lleyton Hewitt and I have put so much dedication into this, the Davis Cup has been my No.1 priority this year. I think we must be favourites going into the doubles' tomorrow," Kyrgios told daviscup.com.

Jordan Thompson and John Peers will play the doubles for Australia against Arthur De Greef and Ruben Bemelmans with the reverse singles to be played on Sunday.

Australia's John Millman reacts after a returning a ball to Belgium's David Goffin during the Davis Cup tennis semifinal match between Belgium and Australia in Brussels on Sep 15, 2017. (Photo: AFP/Emmanuel Dunand)

In Lille, Dusan Lajovic made a mockery of the absence of Novak Djokovic to give Serbia a shock lead over France in their semi-final.

"This is what the Davis Cup is all about," said Serbia captain Nenad Zimonjic, who is without his three leading singles players -- Djokovic, who is sidelined until 2018 with a wrist injury, Janko Tipsarevic and Viktor Troicki.

"The third set was the key. Whoever was going to win that one was going to turn it all around. We need a miracle but we believe in our players."

France captain Yannick Noah was critical of his own performance.

"I did not have a very good match as a captain. I was a bit stressed and I think I passed my stress to Lucas," he said. "I'll have to improve our communication for the next rubber."

In the play-offs, where the winners will compete in the World Group next season, 2016 champions Argentina are 1-1 against Kazakhstan after US Open quarter-finalist Diego Schwartzman eased past Dimtri Popko 6-4, 6-2, 6-2.

Boris Becker's first day as head of men's tennis with Germany ended with his country - missing brothers Alexander and Mischa Zverev - level at 1-1 in Portugal.

Japan were 2-0 up on Brazil while Switzerland, the 2014 champions, are 1-1 against Belarus in Biel.