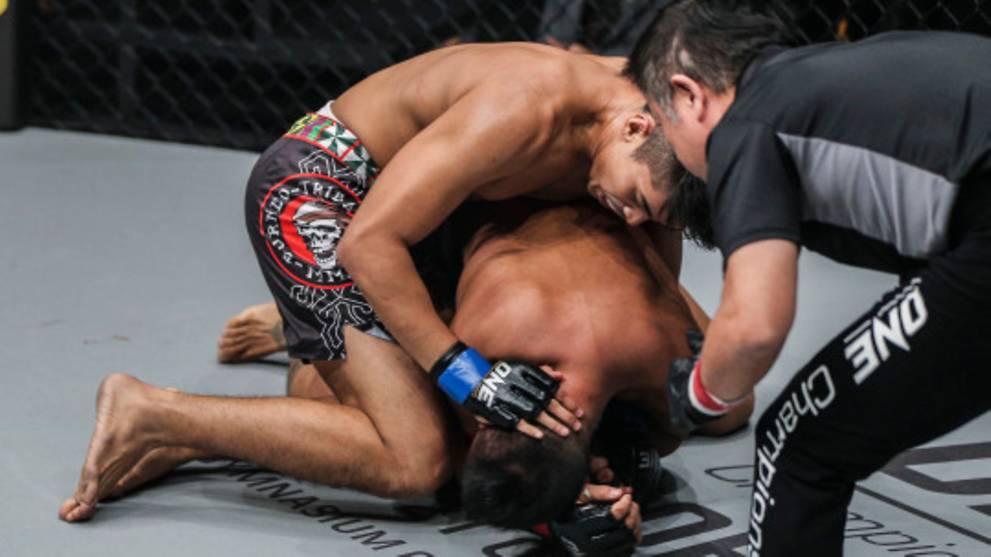 Emotional victory for Malaysia's Hisyam Samsudin (left) at ONE: Total Victory in Jakarta. (Photo: ONE Championship)

He had to keep his emotions in check and focus on a win in the ring against Indonesia’s Jeremy “Predator” Meciaz, just 24 hours after his father passed away.

There was no way the Malaysian was losing, as his father’s last wish before he died was for Hisyam to notch the victory.

Hisyam Samsudin before his ONE: Total Victory win. (Photo: ONE Championship)

Meciaz tried his best in the first stanza, flying out of the gates with a jumping knee that narrowly missed the mark.

Hisyam, a WBF Asia-Pacific Light Heavyweight Boxing Champion, replied in kind with a hard right hand, and the opening seconds dictated the pace for the frantic bout.

It was not to be for the Indonesian fighter, as the 26-year-old freed himself from a submission maneuver and landed on top of Meciaz, dropping powerful knees and punches on his opponent until referee Yuji Shimada was forced to call a halt to the contest at 2:47 into the first round.

Hisyam had lost to fellow Malaysian Aiman Raziz Affindi via unanimous decision in his ONE Championship debut at Stadium Negara, just over a year ago.

The 26-year-old’s triumph in Indonesia, however, meant he improved his record to 2-2 and got the win to honor his late father. “I love you dad, this is for you,” he proclaimed later, in an emotional post-victory speech.

Akhmetov showcased his Greco-Roman wrestling chops to consistently bring Eustaquio to the canvas, controlling the action on the ground.

“The Gravity” still managed to land his usual crisp, clean combinations throughout the contest, but it wasn’t enough to earn him the win as Akhmetov’s grappling proved too much to overcome.

With less than two minutes to go in the bout, “The Kazakh” locked in a guillotine choke. Unable to finish, “Gravity” powered out, and emerged in top position.

This was his best chance for an upset win, especially on a night where other comeback wins had just taken place. But alas, time was not on the Filipino’s side, as the final bell sounded before victory could be snatched from Akhmetov.

The judges tallied up their scorecards, and while one saw it in Eustaquio’s favor, the other two saw it for “The Kazakh,” giving him his first victory since originally winning the ONE Flyweight Championship on his promotional debut in 2015.

Heavyweight bout: Alain Ngalani defeats Hideki Sekine by Knockout at 0:11 minutes of Round 1