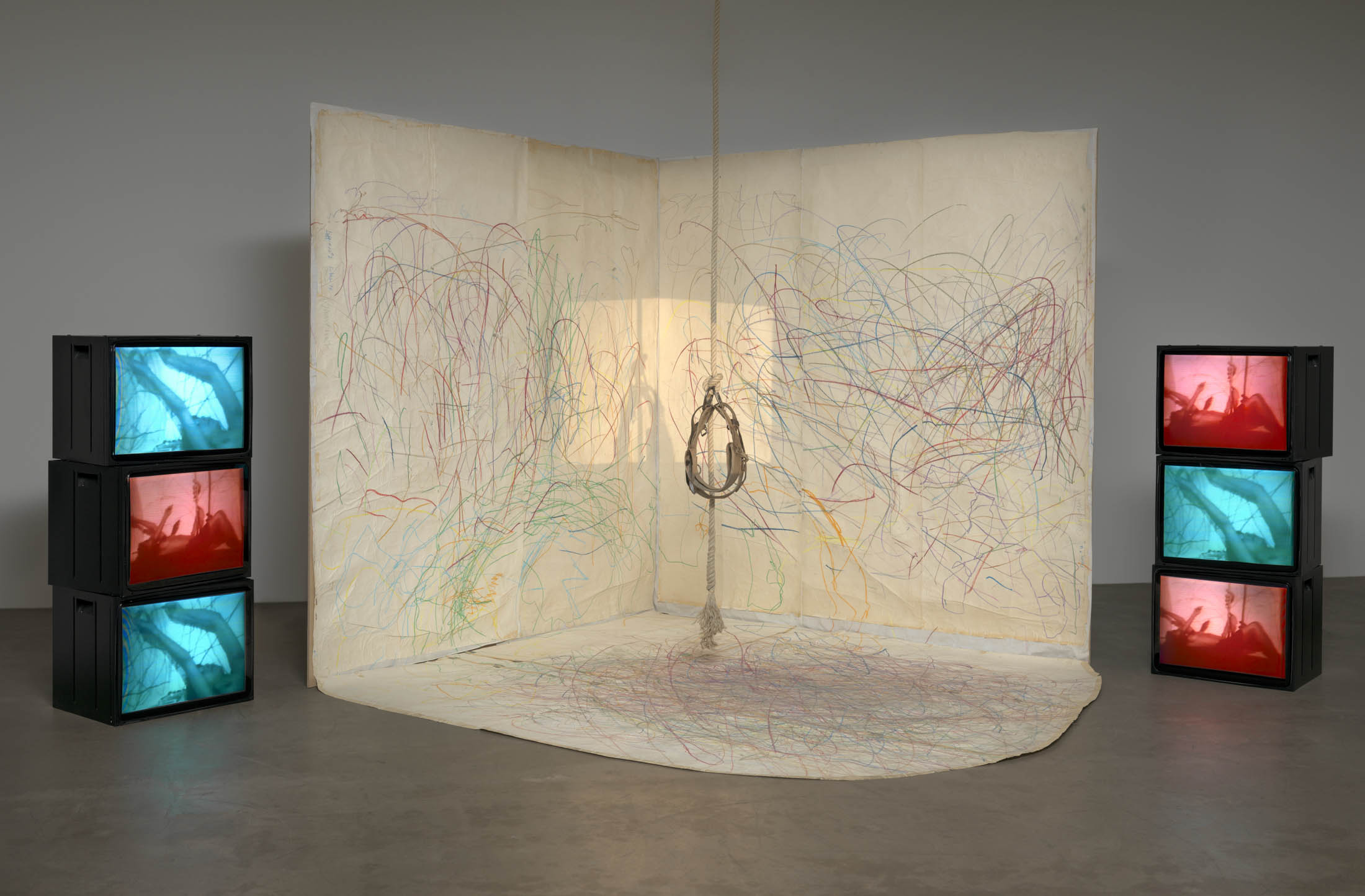 When Jimmie Durham decorated a baby buffalo skull with feathers and paint in 1982 and installed it in a small art gallery in Manhattan’s East Village, he intended for the skull, along with the rest of his installation, to be destroyed when the show was over. Instead it will appear this November, tastefully lit and accompanied by wall text, in the hushed galleries of New York’s Whitney Museum of American Art.

The show, Jimmie Durham: At the Center of the World (first installed in the Hammer Museum in Los Angeles and running at the Whitney from Nov. 3 to Jan. 28), offers a selection of ephemera, found art, and videos, much of which is associated with Durham’s strident advocacy for American Indian rights.

Durham’s Self-Portrait Pretending to Be a Stone Statue of Myself.

Courtesy of ZKM Center for Art and Media, Karlsruhe

Across the East River, MoMA PS1 in Long Island City, Queens, will present a retrospective of Carolee Schneemann, an artist best known for her radical and often nude performances in the 1960s and ’70s. Over in England, the Tate Liverpool will show works by a group of young Egyptian surrealist artists who attempted to enact ­political and social change in the 1930s and ’40s (Surrealism in Egypt: Art et Liberté, which first appeared at the Centre Pompidou in Paris, runs at the Tate from Nov. 17 to March 18). The  Pompidou is joining in with its event program Cosmopolis (Oct. 18 to Dec. 18), where 15 ­international “socially committed” artist collectives have been invited to explore “social, urban, and political questions.”

This wave of protest art popping up in Establishment museums around the world is no accident. “It’s not just to liven the place up,” says Elisabeth Sussman, a Whitney curator who organized the museum’s Durham show. “It’s a matter of response—you’re trying to ­represent what artists today are thinking about in a way that a diverse audience can ­understand.” To be relevant in a world in upheaval, she says, a museum show “should have a sense of urgency.” The Durham show will join the Whitney’s exhibition, An Incomplete History of Protest: Selections from the Whitney’s Collection, 1940 2017 which opened in August.

Medieval protest art at the Getty.

It’s not just modern protest art. Los Angeles’s Getty Center will premiere an esoteric show on medieval manuscripts called Outcasts: Prejudice and Persecution in the Medieval World, which addresses the marginalization of religious and economic minorities throughout Europe and in Byzantium and Ethiopia after the fall of the Roman Empire (Jan. 30 to April 8). “The presence of political art in a museum setting doesn’t just address the work’s specific content,” says Erica Papernik-Shimizu, the MoMA curator who organized the Schneemann show. Importantly, she says, it can shed new light on contemporary dogma.

As political unrest has rocked the U.S., Europe, and Asia this year, the art world has struggled at times to keep up. Some shows can feel irrelevant, while others appear to be trying too hard. “I think sometimes [shows] that try to be politically relevant just don’t have the heat when they hit the walls,” Sussman says.

The Schneemann retrospective (Oct. 22 to March 11) is in no such danger. The New York-based artist, now in her late 70s, pioneered ­performance and visual art that addressed sexual politics and female agency with clear-eyed, unflinching rigor, and works such as Meat Joy, where participants roll around in a room full of raw meat and trash, still have the power to shock.

“Contemporary art has been about dismantling the notion of a passive viewing position, not only in art but in society,” says Papernik-Shimizu. These shows encourage viewers to confront the problems they see in the world around them. “To me that’s precisely what the art of dissent is doing,” she says.

Jimmie Durham: At the Center of the World, Whitney Museum of American Art, New York City, November 3 to January 28