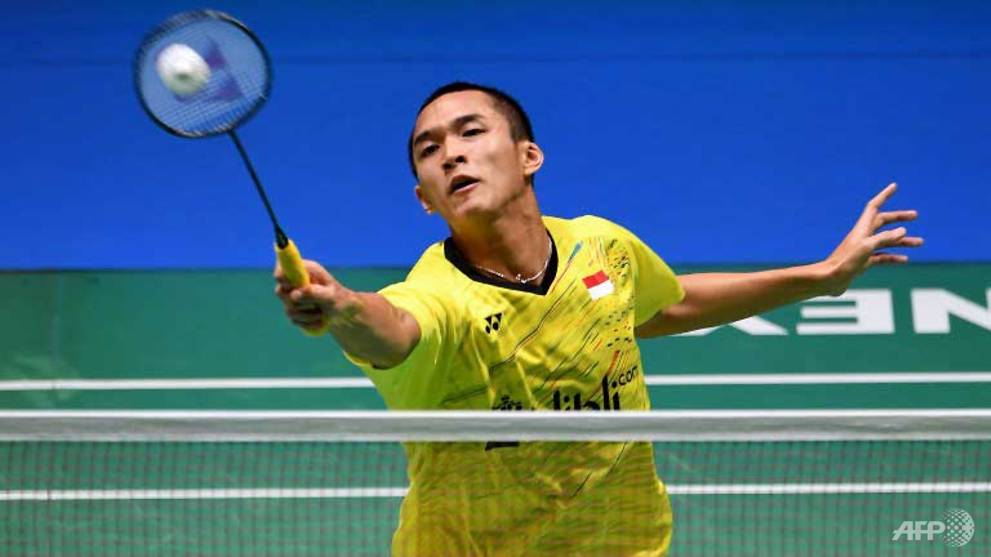 File photo of Jonatan Christie of Indonesia during the Japan Open Badminton Championships in Tokyo on Sep 20, 2017. (TOSHIFUMI KITAMURA/AFP)

SHANGHAI: Badminton legend Lin Dan saved seven match points before being dumped out of the first round of his home China Open on Wednesday (Nov 15), stunned by Indonesia's world number 17 Jonatan Christie.

The 21-19, 21-16 defeat will ramp up speculation that the 34-year-old Lin, widely regarded as the best badminton player of all time, may soon call it quits as he approaches the end of his brilliant career.

Seeded third, Lin, a five-time China Open champion, was guilty of a catalogue of errors in going down to Christie in 42 minutes in a shock upset in the Chinese city of Fuzhou.

The 20-year-old Christie plays Hong Kong's Angus Ng in the second round.

"When we shook hands before the match I felt his hand was cold and I sensed he was nervous," Christie, who lost to Lin in straight games at their last meeting in June, told the official BWF World Superseries website.

"I realised that even though he was a past World and Olympic champion, he could get nervous too, so that made me confident."

Christie added: "One of the best days of my life, I beat Lin Dan at his home crowd."

But for a late rally by Lin, the result might have been even more embarrassing.

Christie had an astounding 11 match points, and even though Lin clawed back seven of them, the Chinese played a weak shot wide of the sideline to go tumbling out of the tournament.

Lin's great rival, the Malaysian Lee Chong Wei, had no such trouble in a 21-5, 21-7 demolition of Taiwan's Hsu Jen-hao.