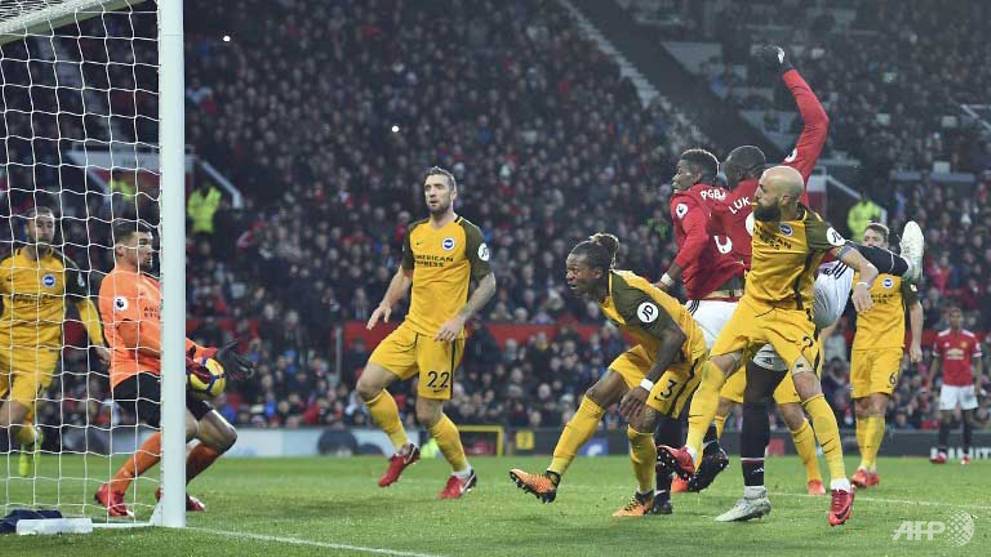 LONDON: Manchester United closed the gap on Premier League leaders Manchester City to five points with a 1-0 win over Brighton, while Tottenham's title hopes suffered another blow in a 1-1 draw against West Bromwich Albion on Saturday (Nov 25).

Jose Mourinho's United bounced back from their surprise Champions League defeat at Basel in midweek thanks to Lewis Dunk's second half own goal at Old Trafford.

However, City can reopen an eight-point advantage over their Manchester rivals if they win at Huddersfield on Sunday.

Tottenham's bid to win the title for the first time since 1961 is in tatters after their latest frustrating result at Wembley left them 10 points behind City.

Chelsea rode their luck to salvage a 1-1 draw at Liverpool thanks to Willian's late leveller.

Antonio Conte's Chelsea were five minutes away from suffering a major blow to their hopes of defending the title after falling behind to Mohamed Salah's opener at Anfield, but grabbed a point thanks to Willian's leveller.

"I saw a good reaction from my players despite long travel and little rest for them. They would not accept defeat," Conte said. "It's not simple to play at Anfield. We tried to fight and tried to win."

Salah, who spent an unsuccessful spell with Chelsea from 2014 to 2016, returned to haunt his old team in the 65th minute.

Chelsea midfielder Tiemoue Bakayoko miscued a clearance, giving Alex Oxlade-Chamberlain the chance to prod the ball into Salah, who slotted a low finish past Thibaut Courtois.

It was Salah's sixth goal in his last five appearances - and his 15th for Liverpool this season - but he opted not to celebrate, apparently out of respect for the more than 300 Egyptians killed in a terror attack this week.

But just as the champions were facing their first defeat in five league games, in-form Willian came off the bench to rescue Chelsea with an 85th minute equaliser.

The Brazil winger, who scored twice in the Blues' 4-0 Champions League win at Qarabag midweek, found space in the Liverpool penalty area for cross that he sliced and saw loop fortuitously over Simon Mignolet into the far corner.

While Chelsea finished the happier side, the draw did little to enhance either club's title prospects.

The third-placed Blues are eight points behind leaders Manchester City, who travel to Huddersfield on Sunday, while Liverpool remain fifth and sit 11 points off the top.

"I'm happy about the performance. It's a little bit more difficult when Chelsea played with eight defenders more or less," said Reds boss Jurgen Klopp. "You need a bit of luck and we didn't have it again."

At Old Trafford, United, featuring seven changes from the Basel loss, found it hard to break Brighton's stubborn resistence before finally nabbing the crucial goal in the 56th minute.

Dale Stephens headed Marcus Rashford's corner to Ashley Young on the edge of the area and his shot deflected off Dunk and looped over Brighton keeper Mat Ryan.

That was enough to secure United's second consecutive league win as they try to keep pace with City.

"I think we were more spirit and heart than quality. My boys they didn't play well but they gave everything," Mourinho said. "For me probably Brighton deserve more than the result they got."

Tottenham have had mixed results at Wembley since moving into their temporary home while White Hart Lane is redeveloped and once again they lacked a cutting edge against supposedly inferior opponents.

The pre-match headlines focused on Tottenham manager Mauricio Pochettino's decision to leave left-back Danny Rose out of the squad for the second time in seven days.

Rose admitted he was "fuming" with his absence from the north London derby and although he played 90 minutes in Tottenham's midweek win at Borussia Dortmund, there was no place for the England international against Albion.

Tottenham laboured for long periods but equalised in the 74th minute when Kane converted Dele Alli's cross for his 15th club goal this season.

West Brom are without a win in 11 league games, while Tottenham have failed to win their last two in the league.

"We weren't clinical, it is always difficult in the Premier League when you concede a goal so early," Pochettino said. "I'm disappointed because the effort was massive but we lose two points."

But bottom of the table Palace drew level thanks to Ruben Loftus-Cheek's tap-in three minutes later and Sakho won it for the hosts from close-range in the 90th minute.

The Hornets showed why their manager Marco Silva has been linked with the vacant Everton job as they swept to a second successive victory.

They took a 19th minute lead through Will Hughes, the midfielder flicking in Marvin Zeegelaar's cross for his second goal in his last two games.

Silva's eighth-placed side doubled their lead in first half stoppage-time when Deandre Yedlin turned Zeegelaar's cross into his own net.

Newcastle were in disarray and Andre Gray punished poor defending to make it three in the 62nd minute.

Reports this week suggested Clement was in danger of the sack and they are now five games without a win, leaving them one point off the bottom.