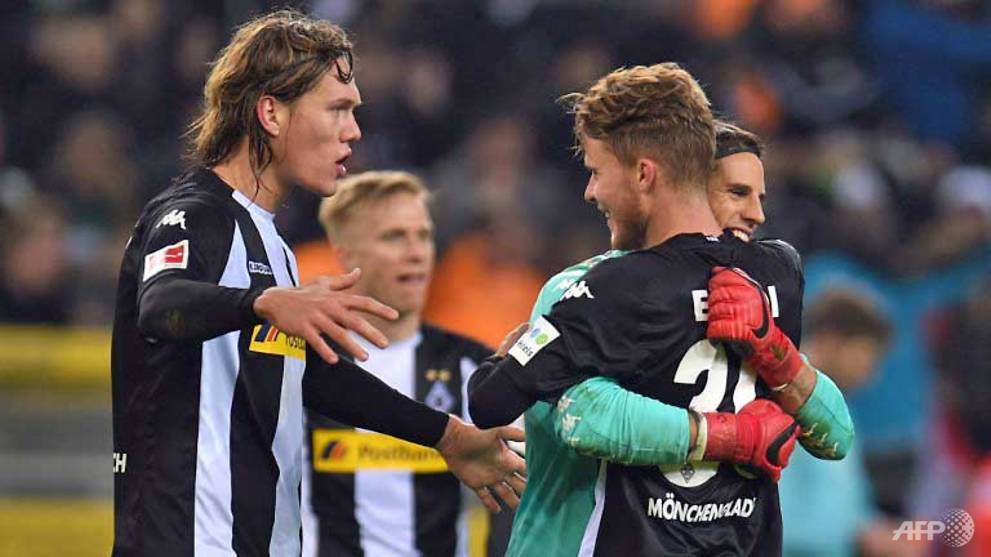 BERLIN: Bundesliga leaders Bayern Munich suffered their first defeat since Jupp Heynckes returned as head coach when they fell to a 2-1 loss at Borussia Moenchengladbach on Saturday (Nov 25), while Borussia Dortmund blew a four-goal lead to draw the Ruhr derby with Schalke.

Before losing at Gladbach, Bayern had won all nine games since Heynckes, 72, took over for his fourth stint at the club in October in the wake of Carlo Ancelotti's dismissal.

It was an unhappy return for Heynckes to Moenchengladbach, where he spent most of his playing career and where his family home is.

"We didn't invest enough in the first half," admitted Heynckes.

"We played too slowly and didn't find our rhythm, so we have to put the defeat down to the first half.

"We were better after the break, but Gladbach were clever in defence."

Gladbach suffered an early setback when Germany midfielder Christoph Kramer was stretchered off following a nasty clash of heads with team-mate Jannik Vestergaard.

A first-half penalty converted by Thorgan Hazard, after a Niklas Suele handball, put Gladbach ahead.

They went into the break 2-0 up at Borussia Park when Lars Stindl's pass was converted by Matthias Ginter to the delight of the home fans.

Heynckes responded by bringing on Austrian midfielder Marco Friedl, 19, for his Bundesliga debut.

He came on for the second period in place of James Rodriguez, who suffered a suspected concussion in a clash of heads with Kramer's replacement Tony Jantschke.

"He (Rodriguez) didn't know what the score was at half-time, so I assume it was a concussion, but we have to wait for a proper diagnosis," said Heynckes.

Bayern managed to pull a goal back when Chile international Arturo Vidal fired in a long-range shot on 74 minutes which Yann Sommer got a glove to, but couldn't prevent from rolling into the net.

With time almost up, late replacement striker Josip Drmic fired wide as Gladbach held on for the win.

It is only Bayern's second league defeat this season, having also lost 2-0 at Hoffenheim in September, but they still hold a three-point lead at the top of the table.

Gladbach move up to fourth, level on 24 points with third-placed Schalke, who came from four-goals down to draw at ten-man Dortmund as a dramatic Ruhr derby finished 4-4.

The hosts were shell-shocked as Dortmund had raced into a 4-0 lead with 25 minutes gone after Pierre-Emerick Aubameyang opened the scoring.

An own goal by Schalke midfielder Benjamin Stambouli, a Mario Goetze header and a Raphael Guerreiro volley followed to give Dortmund a commanding lead.

However, after Guido Burgstaller and Amine Harit clawed goals back for Schalke, the hosts had Aubameyang sent off in the 72nd minute for a second yellow card.

Borussia's collapse was completed when Daniel Caligiuri blasted home to make it 4-3 late on before Naldo's late header delighted the travelling fans and stunned the hosts.

Dortmund coach Peter Bosz is under increasing pressure as his fifth-placed side are now winless in their last six league games dating back to late September.

"It's hard, you only feel disappointment," said the Dutchman, clearly stunned by his team's collapse.

"When you lead 4-0, that shouldn't have happened.

"After the red card, we didn't play any more football, lost the ball too quickly and didn't use our room, but I don't want to look for excuses."

Bayer Leverkusen moved up to sixth with a 1-0 win at Eintracht Frankfurt with Germany forward Kevin Volland scoring the winner.

Michael Gregoritsch and Alfred Finnbogason scored for mid-table Augsburg as they came from behind to seal a 2-1 win over ten-man Wolfsburg, who had Maximilian Arnold sent off after only 11 minutes.

That was Wolfsburg's first defeat under new coach Martin Schmidt since losing to Stuttgart in September.