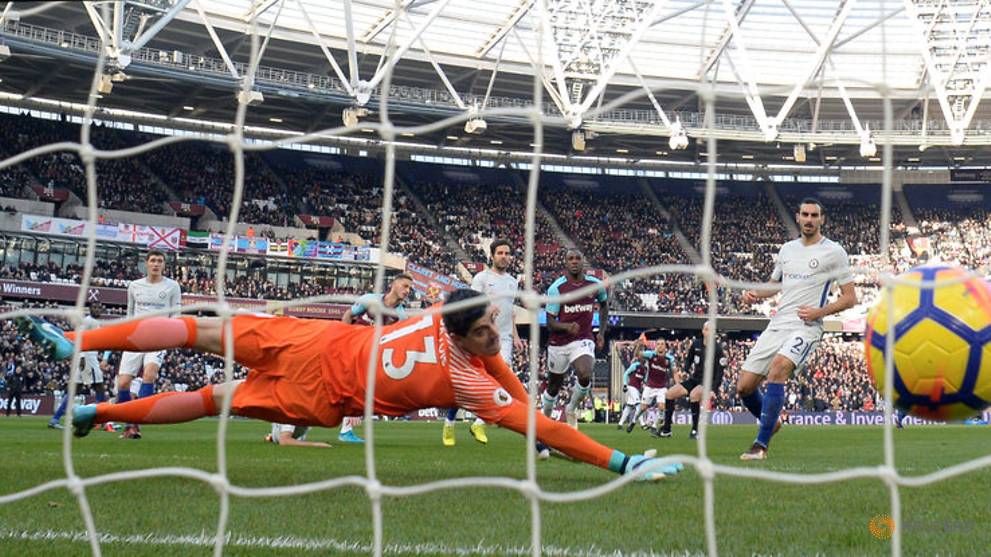 Chelsea hopes of retaining the Premier League title suffered a severe blow as West Ham United upset the form book to win the London derby 1-0 on Saturday and give David Moyes his first win as their manager.

LONDON: Chelsea's hopes of retaining the Premier League title suffered a severe blow as West Ham United upset the form book to win the London derby 1-0 on Saturday and give David Moyes his first victory since taking over as manager.

Marko Arnautovic's early goal and a gritty rearguard action by the Hammers inflicted a first league defeat in eight games on third-placed Chelsea who are 11 points behind leaders Manchester City ahead of their game against second-placed Manchester United on Sunday.

Burnley are level on 28 points with Tottenham and Arsenal after beating 10-man Watford 1-0 at a wintry Turf Moor thanks to Scott Arfield's goal on the stroke of halftime.

Watford were reduced to 10 men from the 39th minute after Marvin Zeegelaar was shown a straight red for a wild tackle.

Christian Benteke missed a stoppage-time penalty that would have given Crystal Palace victory over Bournemouth but they had to be content with a 2-2 draw as Jermain Defoe scored twice for the visitors at Selhurst Park.

Swansea City climbed off the bottom, above Palace, with a 1-0 home victory over West Bromwich Albion that ended a near two-month run without a victory.

With West Ham and Swansea winning only six points separate the bottom nine clubs with West Ham only in the bottom three because of an inferior goal difference to West Brom.

Huddersfield Town ended a four-game losing streak to ease into mid-table with a 2-0 victory over fellow promoted side Brighton and Hove Albion.

In the day's late kickoff, Leicester City recovered from conceding early at Newcastle United to triumph 3-2 with their late winner coming from an own goal by Ayoze Perez.

Newcastle are two points above the drop zone while improving Leicester moved into the top eight.

Chelsea fell behind after six minutes at the London Stadium as former Stoke midfielder Arnautovic curled a shot past Thibaut Courtois for his first West Ham strike.

With Adrian in goal, rather than England keeper Joe Hart who was dropped, West Ham dug deep and restrained Chelsea, although they did breathe a sigh of relief when Alvaro Morata wasted a late chance to equalise for Antonio Conte's side.

"To talk about the title race after a defeat is a bit strange, especially if this is the fourth defeat of the season in 16 games," Conte said. "When you have this start, it is impossible to think you are in the title race."

Moyes has steadied the West Ham ship and while they are still in the bottom three, last week's narrow defeat at Manchester City and victory over Chelsea offers renewed hope.

"We need our season to turn now. We've beaten the champions today, it's a great achievement for us and a great three points," Moyes said.

Tottenham led at halftime through a Ryan Shawcross own goal but cut loose after the break with Kane's double taking his Premier League tally for the calendar year to 33, three less than the record 36 scored by Alan Shearer in 1996.

Palace could have moved level on points with fourth-from-bottom West Brom but Benteke's weak penalty denied them the three points, much to his manager Roy Hodgson's annoyance as Benteke was not allocated to take spot-kicks.

"If you do that you really have to score or you face the wrath of your manager, the coaches and your team mates," said Hodgson, whose side have drawn four of their last five.