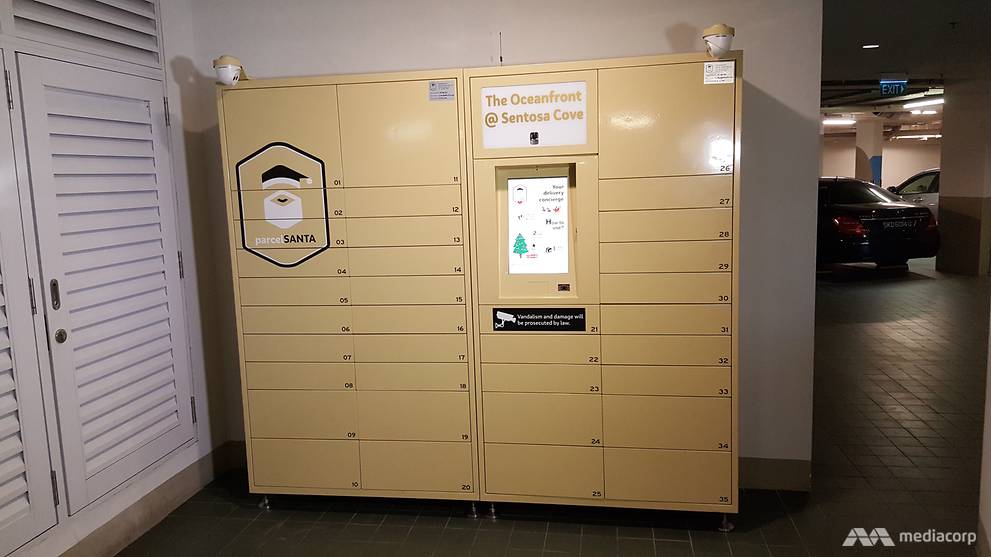 SINGAPORE: Ahead of the Government's plan to roll out parcel collection lockers to serve estates across Singapore, at least 30 condominiums have installed them within their premises.

Around another 30 private residences have signed on to have such locker systems in place.

Montebleu at Minbu Road is among the growing number of condominiums that have said yes to a parcel collection network.

For Royston Tan, a Montebleu resident, the lockers solve the problem of missing out on receiving e-commerce packages whenever the deliveryman shows up to an empty house.

"Locker systems like this will give us, you know, a level of convenience where items that we ordered can be dropped off ... whether or not we are at home, and then we come and collect at our own convenience,” said the 43-year-old technology firm vice president.

Spring Grove, Sims Green, Amber Point, Tanglin Park and Chestervale executive condominium have also signed on for the lockers and will have them installed in due course.

This follows the announcement by the Infocomm Media Development Authority in November that a parcel locker network will be tested out at public housing estates in Punggol and Bukit Panjang next year under a pilot initiative.

Deputy Prime Minister Tharman Shanmugaratnam had said last year that there are plans for a federated locker system in residential areas to improve last mile delivery of parcels around the island.

While scores of condominiums have taken the initiative to implement such a system, not all private residences have readily taken to the idea, said parcel locker vendor Parcel Santa.

"A lot of them would like to take a wait-and-see approach and see how this develops before they commit themselves," said Jim Huang, chief executive and co-founder of the start-up.

Parcel Santa gets paid by delivery providers like FedEx and DHL every time a locker is used.

If mail is not collected within a 24-hour period, residents are also charged between S$1 and S$3 for every 12-hour block a parcel sits in a locker.

The lockers have in place a multi-layered security system to deter tampering or vandals.

Users enter verification information into the locker system sent to their mobile phones or emails when their packages arrive.

Without this authentication process, the parcel containers cannot be opened.

Cameras with round-the-clock surveillance and infrared sensors are also embedded into the system.

In most of the private residences, lockers are installed at basement car parks.

Only deliverymen registered with courier service providers are authorised to open the lockers to place packages, said Parcel Santa.

"IT'S A LEARNING CURVE"

The Oceanfront @ Sentosa Cove has 35 lockers installed serving about 260 units.

Chairman of the condominium’s management committee Desmond Soo said his estate’s security services were an added safeguard against potential saboteurs.

"There's always a possibility someone could put a bomb. But I think they've (Parcel Santa) given us measures and in a way, it's a learning curve as well," he said. "We signed (an) agreement with them and we want to start looking at it continuously, monitoring the situation, evaluating."

The research fellow at the Institute for Defence and Strategic Studies at the S Rajaratnam School of International Studies said that while nothing is fool-proof, there are still precautions that can be taken to minimise risks.

"These locker systems ought to be placed in a vicinity within a condominium or a housing area which is a little bit of a distance away from where the residents are living," he said. "You know push comes to shove, if something negative were to happen, then at least the fallout can be mitigated."

In future, when more parcel lockers are installed around homes, he added that they could be put near rubbish collection areas in estates for example as a security safeguard.