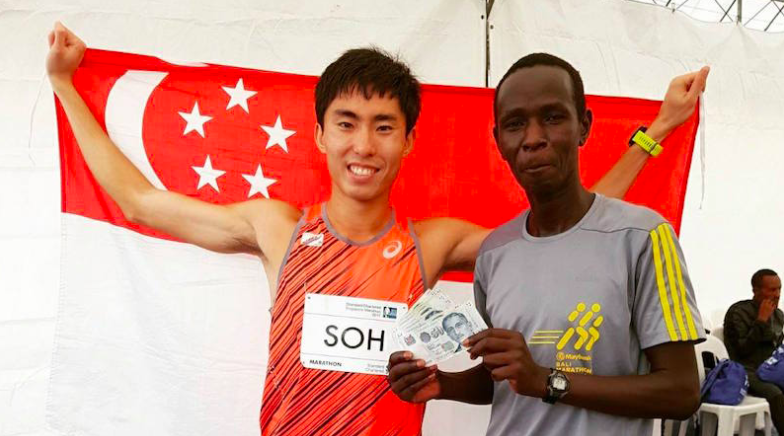 National marathoner and two-time SEA Games champion Soh Rui Yong recently made headlines as the first Singaporean to hit the finish line at the Standard Chartered Singapore Marathon on Dec 3. For the honor of being the top local finisher, he received S$10,000 in prize money.

On Friday, his name came up again in the news. This time because he announced he gave away part of the money — S$500 to be exact — to his “new friend from Kenya”, Elisha Sawe. In a Facebook post, the 26-year-old described Sawe as a marathoner who lives and trains in Malaysia, who came to participate in the race here in the hopes of winning some prize money.

Unfortunately, Sawe was dropped by the lead pack of Kenyans early on in the race. So when Soh caught up with him at the 13km mark and introduced himself in Swahili, he agreed to run alongside Soh. The pair kept up the fast pace until Sawe dropped out at a medical vehicle at the 31km mark.

Soh said that after he finished the last 11.2km alone and won the race, he waited in the elite tent until he saw Sawe. He then gave Sawe S$500 as a show of thanks “for his awesome company in the race”, before ending off his post wishing Sawe all the best in future races.

Netizens commended Soh for his generous spirit and show of sportsmanship, with one commenter calling him “a champion in more ways than one”.

Its good to see some sharing moments between the two after the race between these two. One from Kenya and the other from Malaysia. It's not the amount of money that counts , it's the heart that the winner has !