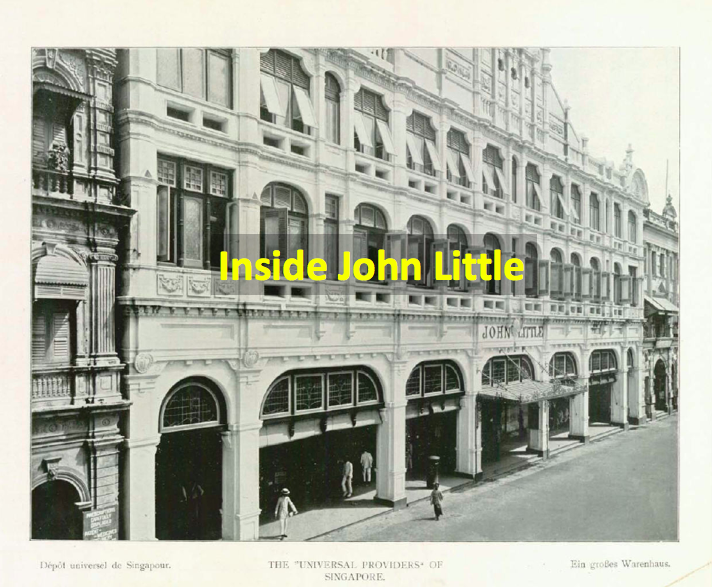 In January 2017, the shutters came down on John Little, Singapore’s oldest department store.

It ended a 174-year presence in Singapore’s retail scene.

In its final days, John Little was known for stocking up on its curated selection of regular products, such as clothes and household items, that targeted mass consumers familiar with the brand. This approach was different from the past.

John Little began life in the mid-1800s, when Singapore was a young British territory. Those early days saw it targeting well-heeled consumers among the population of Singapore, who were usually European.

For 117 years up till 1960, the store was located in a building at Raffles Place, whose iconic facade still lives on in a smaller version at one of the entrances of Raffles Place MRT Station.

Since the building’s exterior was so iconic, what did it look like inside?

It’s actually quite rare to find photographs of the interior of the building, but we found some in a very old picture book called  published by the store itself in 1905.

The photos give us an idea on what the store sold and also how the products were displayed.

Here’s a general look at the interior with whisky, wine and tobacco among the products being sold.

Catering to well-heeled Europeans, the store had a silverware department.

And this was their glassware and crockery room.

In typical English fashion, there were also tea rooms within the building.

Apart from , we also found this 1912 picture of John Little’s men’s clothes department.

Gotta admit that John Little was one atas-looking store in the past.

You can take a look at other aspects of old Singapore in Views of Singapore .

Top image from Views of Singapore via NLB