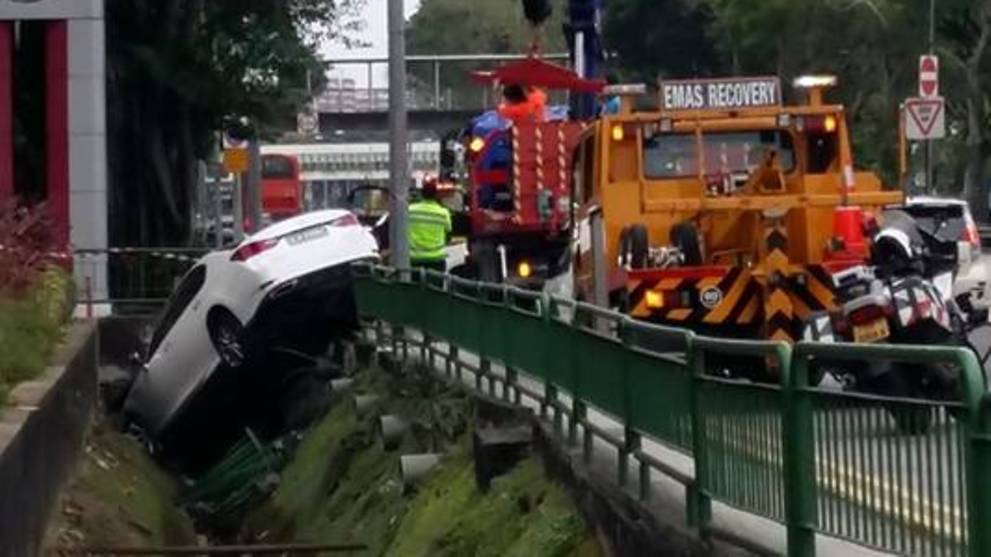 A 67-year-old woman crashed her car into a drain along Bukit Timah Road. (Photo: Facebook/Md Taufiq)

SINGAPORE: A 67-year-old woman was taken to hospital after losing control of her car and crashing it into a drain along Bukit Timah Road on Wednesday morning (Dec 13).

The car driver was taken conscious to National University Hospital and police investigations are ongoing.

The Singapore Civil Defence Force - which was alerted to the incident at around 11am - added that the hospital was alerted to be on standby to receive the woman.

The car mounted the kerb, crashed through a railing and ended up in the drain. (Photo: Facebook/Ro Vigi)

Channel NewsAsia understands that the woman lost control of her vehicle, mounted the kerb and crashed through a railing into the drain.

Photos circulating online appeared to show a white sedan stuck front-end first in a drain, having crashed through railings at the side of the road.

Can you imagine if people can drive a car into the drain, some evem into a swimming pool, do you know your life is at highest risk when you least expected, someone might bang onto you either as pedestrain or motorists. I have seen mamy a time, people driving in a dangerous manner without paying attention on the road endangering other road users. Some drives using mobile phone. How are we going to avoid the mishaps happening to us? The best is don't go out!