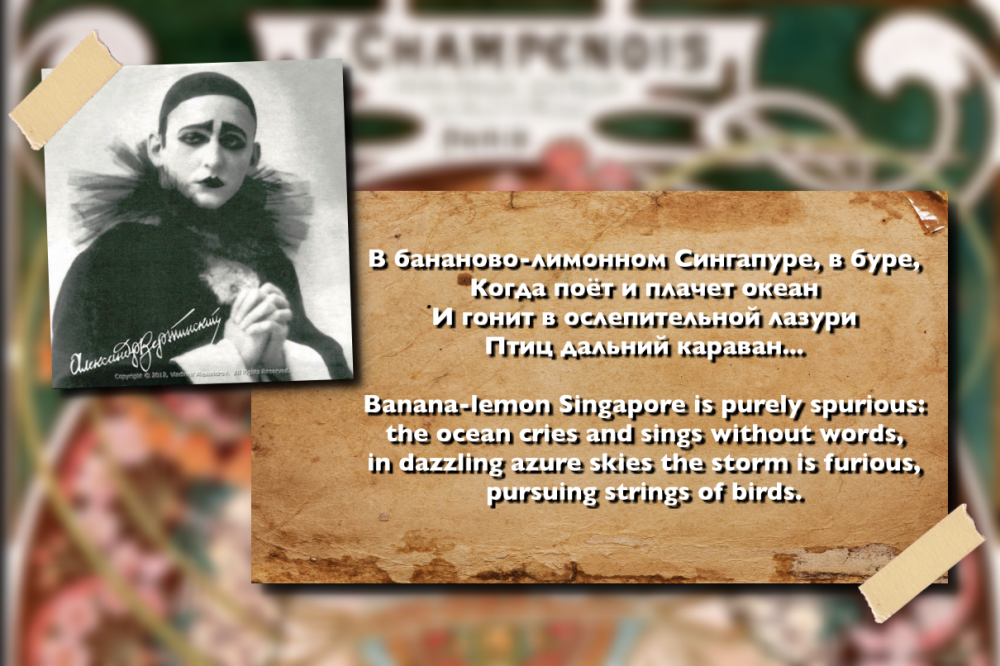 Tango Magnolia by Alexander Vertinsky is a really old Russian song from the 1930s.

If you can’t sit through the full song, you should at least hear that first line where Vertinsky goes “banana lemon Singapore-ore”.

Your ears aren’t playing tricks on you, Tango Magnolia is indeed about Singapore — a banana lemon-y Singapore.

Before we go into explaining what this song is all about, you need to know about this Alexander Vertinsky guy first.

A prominent figure in early 20th century Russia, Vertinsky was an influential singer and performer.

He was well-known for his expressive stage persona which was a Black Pierrot, derived from the sad clown archetype which originated from French pantomimes.

It was perhaps his wish tofrom “mundane values and interest” in which his pierrot persona came into being, allowing him to seem like a person, haunted and gaunt, from another world.

Speaking of another world, Vertinsky’s songs from his early career have a dreamy characteristic of escapism infused with a touch of chic and cosmopolitan desires.

Vertinsky would use his pierrot persona when performing his doleful little ditties, and his French chanson-like delivery earned him the name of “Russian Pierrot”.

Tango Magnolia is one of those ditties in question, performed to a tango-like rhythm and tune.

It was written in Bessarabia in 1931, which is now part of modern Moldova, far away in Eastern Europe.

But curiously, this song is about a banana-lemony Singapore.

If you look at the, you’ll realise how woeful the song is, filled with a melancholy as Yvetta (or Ivetta) pines for her love far away on the banana-lemon shores of Singapore.

Banana-lemon Singapore is purely spurious: the ocean cries and sings without words, in dazzling azure skies the storm is furious, pursuing strings of birds.

Banana-lemon Singapore is purely spurious, the silence on your heart is like a stone, the frowning of your eyebrows is injurious, you’re always sad, alone.

And tenderly reviving another May empyrean, my caresses, my words, my eyes and mouth, Yvetta, you are crying, for our song is dying, your heart’s no longer flying with no flame of love.

A parrot shouts, frightening, you’re standing still and sighing – a lonely wild magnolia in bloom – Yvetta, you are crying, for our song is dying, for somewhere summer’s soughing, gone with dreams of doom.

Your opal-moonlight Singapore is purely spurious, when storms tear off bananas in your dreams. The tiger skin you sleep on is luxurious amid the monkeys’ screams.

Banana-lemon Singapore is purely spurious. A tropical magnolia in bloom, you jingle with your rings and try to cure us, you love me still, in gloom.

Why Singapore, why Tango Magnolia?

Information about why Tango Magnolia came to be seems somewhat confusing.

There seems to be zero academic knowledge as to why, of all places, Singapore was chosen to be highlighted in the song instead of other Asian countries.

However, from whatever that can be retrieved online, there’s plenty of reason why the song was created.

One book described the song as one that created beautiful imagery as a form of escapism for audiences who lived through the war.

On the, it is mentioned that the Magnolia was chosen as it was often associated with tropical countries in Russian culture, given its widespread growth in the regions south of Russia.

Perhaps then the entire song was just a general ode to a nostalgic pining for a long-lost love, which in this case might be

After all, for much of 1927-1934, he was touring and performing around the world while living mainly in Paris, and would have only been able to return home in 1943, during World War Two.

It was probably the old Russia he longed for and wished to return to, but of course he faced Soviet realities.

Vertinsky is a culturally impactful figure in Russian music, and Tango Magnolia is so popular that it might be the most common answer most Russians have when

More recently someone named Vitas did a rendition of Tango Magnolia on Russian variety show точь-в-точь, or “just the same” in 2014.

This took place during the show’s first season, and Vitas was dressed up like Vertinsky’s dark pierrot persona.

Vitas, a Latvian who sings in Russian, is best known for his crazy vocal range and memes made out of his song 7th Element.

You have to admit, Tango Magnolia is an interesting cultural nugget that links Singapore to a seemingly faraway place like Russia.