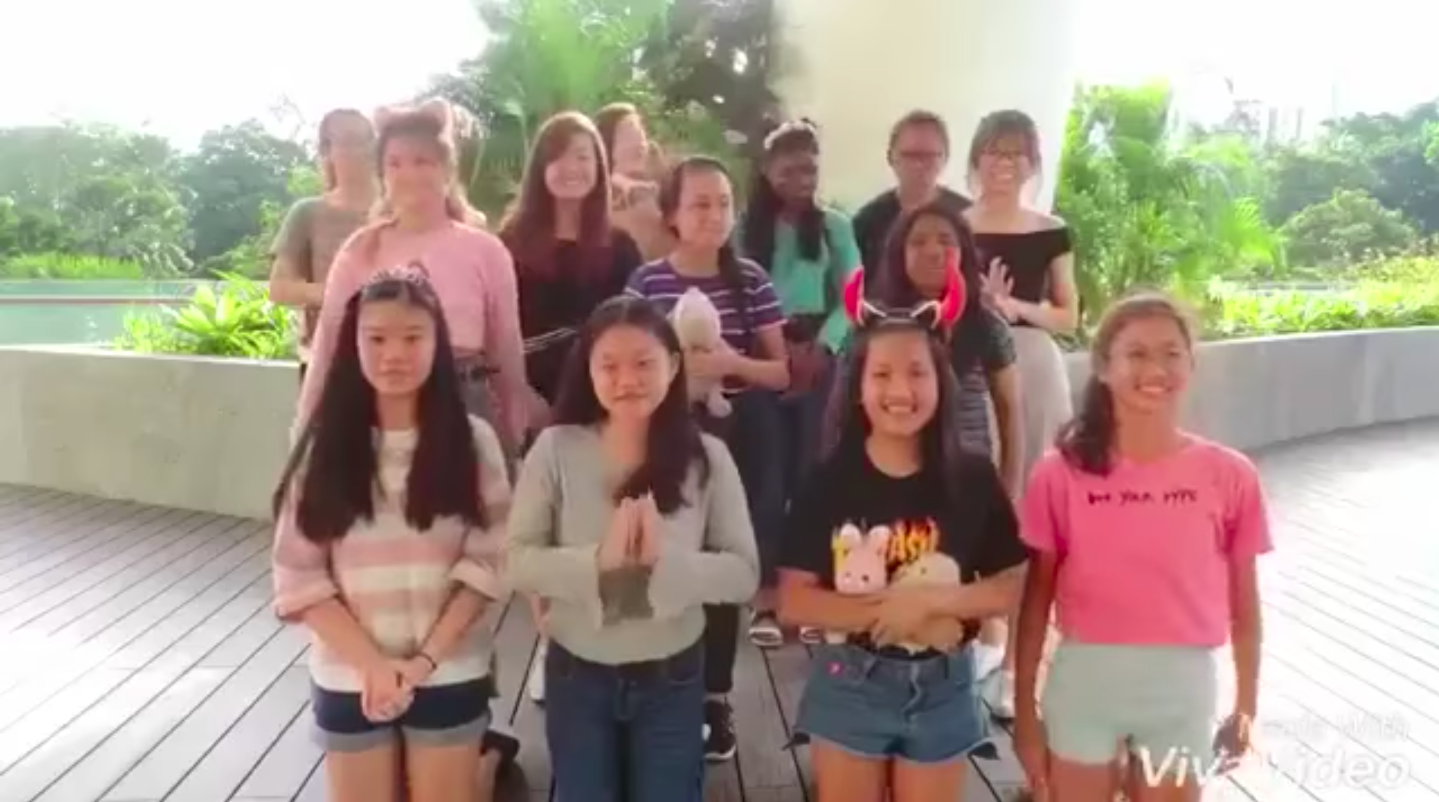 A S’porean teen K-pop fan’s take on Beaunite: The girls were wrong, but lynching them is worse

The 13 girls, aged between 13 and 17, made their self-proclaimed debut as a K-pop group, but the manner in which they did it garnered a lot of criticism from netizens — to say the least.

They got it the worst, naturally, from more defensive K-pop fans, and it’s come to the point where over the weekend, they made the decision to disband.

In an Instagram post — now the only one on that still has more than 11,000 followers — the girls promised to train harder and longer, and return as a K-pop cover group instead.

As an avid K-pop fan myself, I completely understand where these netizens are coming from — in fact, I found the video pretty cringey the first time I watched it.

Take the introductions they used for the members, to begin with — lots of the labels they applied to themselves are references and terms that are very familiar to K-pop fans:

“Fake Maknae”, for instance, is used to refer to a member who’s not actually the youngest in the group but is playful and behaves like the youngest;

“Visual” is an actual role in K-pop groups given to members who are the “best looking”, and so they become the faces of the group.

Add this to the fact that apart from some greetings, the girls barely spoke in Korean at all, introducing themselves in English throughout the video — so how are they a K-pop group, really?

It would also objectively be putting it mildly to say that their “debut” video proved to be of a less-than-fantastic quality — clearly, to me at least, reflective of a sheer lack of effort on their part as well, especially when compared to the flashy techniques constantly used in actual, professional K-pop releases.

And let’s talk about the word “debut” too, shall we?

The screenshot above is from an episode of a K-pop show called “Produce 101” — a Korean idol survival show where 101 trainees compete to win a coveted 11 spots in a temporary K-pop group.

“Produce 101” is just one of several that capitalise on showcasing the sheer extent of how cutthroat and competitive the K-pop industry is — aspiring K-pop girls work for months, in some cases years, in training before getting to debut in Korea.

Here’s the full clip from the show, in case you’re curious — it’s quite amazing for a non-K-pop fan to behold, really:

So I’m telling you about shows like this to help you understand just how intense the process is — for potential singers to be selected as trainees in the first place, they have to go for rounds of auditions, typically beginning with either an online application for global applicants or a live audition where applicants would have to showcase their best singing/dancing/rapping/acting skills.

If shortlisted, applicants are invited to travel to Korea to visit the audition company, where they will have to go through a camera test (performing in front of the camera). Depending on the size and fame of the entertainment company, the audition process can vary in competitiveness.

Once selected, however, the exact training period for idols to debut varies quite widely. Pictured above is TWICE’s Jihyo, who had 10 years of training before debuting.

The routines they go through are largely the same, though. Trainees have to take vocal classes, dance classes, acting classes and language classes (this is growing increasingly important for idols nowadays), and perform at regular showcases in front of their company executives for their progress to be checked.

As most of the trainees begin this rigorous process from young, they also have to juggle their schoolwork with their training, with many of them taking dance classes till late at night after their school day is over.

And by the way, Korean high school , with classes running from 8am-around 4pm each day.

Perhaps the toughest part about all this is that trainees may never get to debut, after their rigorous and lengthy training. There are instances where trainees are told to leave their companies, even after long training periods, because the company just “didn’t see potential in them”.

These include EXID’s Hani, IU, and many other Korean idols who were previously rejected or booted by companies like JYP Entertainment.

In more tragic cases, the desperation of trainees to debut (especially after they had already devoted their youth to training for a career in the cut-throat Korean entertainment industry) and their constant failure to do so .

Now, as K-pop fans themselves, I’m sure Beaunite would have been familiar with the hardships their own favourite idols would have gone through before debuting. In fact, knowing how hard idols have worked to get to where they are now often inspires fans like us, and that’s what makes us feel even more passionately and strongly for these singers — hence the ardent support that K-pop fans are well-known for.

In this light, I’m going to give the group the benefit of the doubt and assume that Beaunite used the technical term “debut” to add authenticity to their video, rather than with the intention of being offensive or undermining of these efforts we all know and admire of our K-pop idols.

Perhaps it was for fandom

That being said, this whole video could just have been the product of a bunch of teenage girls who wanted to emulate their favourite idols and collaborated to create what they saw as a typical fan project, especially since these are already so common in K-pop fandom.

K-pop dance and instrumental covers, or even fan art of music videos/idols have always been popular ways for fans to express their love for a particular singer or a group, and I too personally take a lot of joy in creating piano covers whenever I encounter a song that I really like.

Here’s a piano cover of BTS’s “Spring Day”, for instance (not by me though):

More importantly, Beaunite, even if it should eventually return as a cover group, is not the first of its kind in Singapore. There are K-pop dance cover groups here too, like MonsterG:

With these “seniors” around, it would be natural for these girls to aspire to do the same, especially if they shared the same love of K-pop dance.

Becoming part of a community of fans and organising projects like these has also become easier thanks to social media — and for the K-pop community, in particular, Twitter. With a simple click of a trending hashtag many “mutuals” (members of the same K-fandom) can be found, and a fan project can be just as easily organised.

Larger-scale successful fan projects include a project to build an “SJ School” in West Africa, in commemoration of their 10th anniversary back in 2015.

While less common, there are even K-pop fans who engage in role-playing on Twitter — they create accounts with the names and pictures of their K-pop “biases” (their favourite idol group members or singers — I’m teaching you terms here, guys), and also tweet pretending to be them. Those have fans and followers too, by the way.

Even if this can be considered understandable behaviour for K-pop fans (in my opinion, at least) given the passionate and connected nature of K-pop fandom, Beaunite could have gone about the whole endeavour in a more mature and sensitive way.

The fact that they’re still so young, however, is what makes me so disturbed by the extent of the hate they have received. Death threats for a harmless video made out of fan-love and fun? It’s scary what netizen culture has become, what with people hopping on the bandwagon and hating on these kids just because everyone on their timeline is doing so.

Receiving hate comments is a hurtful experience for anyone.

Established K-pop idols like Epik High’s Tablo have opened up about how online criticism and malicious rumours spread about his personal life — netizens doubted that and created conspiracy theories about it even though it was later proven that he did, and they even questioned the birth of his daughter, Haru. These affected not just his emotional health, but the reputation of his family members, who faced harassment and even lost their jobs.

Umji, a member of popular girl group GFriend, also suffered many attacks from netizens over her appearance and weight. While she never officially revealed how these comments affected her, she reportedly started on stage and recently lost around 5kg, even though she wasn’t objectively fat to begin with.

Given how far these comments have affected professional Korean idols in the past, I can completely imagine how much more they would impact these girls, in particular their self-esteem.

As someone who’s just a little older than them, imagining what these girls are going through now horrifies me because of how relentless netizens can be. For expressions of fan-love, which used to be free and up to the creativity of individuals, to be placed under such scrutiny and to receive such strongly negative backlash is is in my view, despite everything, still unwarranted and excessive.

No matter how embarrassing this video was to watch, or how personally offended we might be by it (as I pointed out earlier, I was too), there has to be moderation and rationality in our responses to it.

Comments or tweets expressing what we find wrong about what Beaunite did are fine, but going a step further and criticising their appearances, as well as making personal attacks, for instance, (on several “roast Beaunite” videos online) is just uncalled for.

We need to realise that what we post online does carry weight, especially comments that we sometimes think are insignificant or “just for fun”. They do impact the receivers greatly.