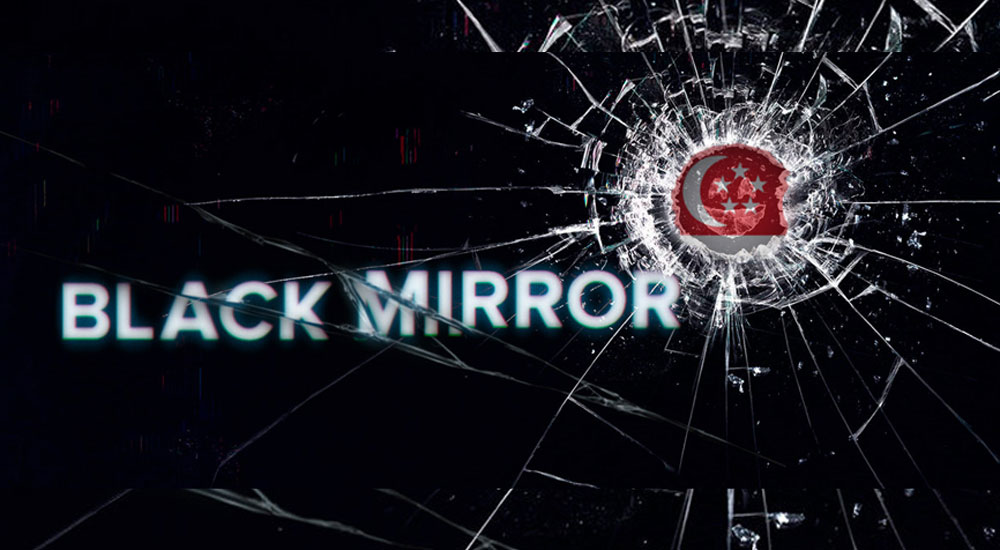 If Netflix’s Black Mirror was set in S’pore

Tired of living in the real-world dystopia of 2017? Why not seek refuge in the fictional dystopia of Black Mirror instead?

Created by writer Charlie Brooker, the satirical British show immediately became a hit when it debuted in 2011 for its insightful social commentary, predictions of how society would misuse technology, and dark humour.

With just 13 episodes over three series, the show has garnered critical acclaim.

One of its episodes, San Junipero, managed to win a Primetime Emmy Award and make Belinda Carlisle’s song Heaven is a Place on Earth cool again.

Another of its episodes, Nosedive, seemed to predict  of assigning credit scores to citizens based on their social ratings.

And yet another episode, The Entire History of You, has been optioned by Robert Downey Jr for a film.

After being picked up by TV juggernaut Netflix, a fourth series was ordered. Netflix revealed that all episodes will be available on Dec. 29, 2017 in a tweet.

It got us thinking; What if the next series of Black Mirror had a local flavour?

There’s something about its theme of the proliferation of technology exploited by an amoral society that fits our island so well.

Here are our suggestions for episodes, with ominous titles and everything.

1. The Opiate of the Masses

Realising that no one pays attention to their press releases, a government department recruits social influencers to communicate government policy to the public.

Realising that they now control the means of communication, the influencers subtly manipulate the messages to their followers for their own ends. The influencers then become politicians themselves and are appointed to high office.

Unfortunately, due to the circular nature of revolutions, they lose touch with the masses and are forced to recruit the next generation of influencers to communicate their policies.

Finally taking a breather after a long weekend & heard from @joalong_ that MARIGOLD PEEL FRESH Yuzu Juice is really refreshing 👌 Documenting this moment by being a part of @peelfreshsg's #juicefie competition. Anyone hopping on the bandwagon too? ...

2. Throw Off Your Chains

As robotic technology becomes more advanced, robots are used in construction and domestic labour instead of foreign workers.

This is considered creepy by some members of society at first, but soon robots performing menial tasks becomes commonplace. Eventually, there is a serious proposal for robots to serve in the army, thereby freeing people from National Service.

One of the robots, who has gained sentience, says that it would gladly serve NS — in exchange for Singaporean citizenship. A debate rages with no end in sight.

The debate is concluded when a virus shuts down all robots around the world.

After heavy investment, Sentosa is thriving as one of the biggest tourist attractions in Southeast Asia. Some Singaporeans live and work full-time on the island, as well as wealthy foreigners at the Cove.

However, residents are resentful that the mainland rakes in all the revenue from Sentosa, without compensating them more in return. The working class and the rich form an alliance and declare independence, seceding from Singapore.

After a terrible war, Sentosa secures recognition from the United Nations and becomes its own country. But they face troubles trying to sustain the new state. After several years, West Sentosa secedes from East Sentosa.

Gif from The Fandom.

New Identity Cards are implanted with location-tracking microchips so that the government can physically track people down if needed.

This is announced as a safety measure, should children or senior citizens go missing. People are mostly okay with this.

Everyone’s movements are tracked, down to the last minute. Soon, people are complaining that they have no privacy. Some people throw away their IC to fight the system.

A law is passed where every baby gets a microchip implanted under their skin at birth instead.

In the future, every Singaporean has a job. Except for one man. The government is unhappy that this guy is preventing them from announcing 100 percent employment to the rest of the world.

They try their best to find him a job. But he’s got enough money to survive and just doesn’t feel like working.

However, the jobless man falls in love with a woman who works as a civil servant. He wants to work in the same office as her, but her department already has a full headcount.

The government moves heaven and earth to shift headcount around so that the man can take up a job in the same department.

The day before they can announce full employment, another guy who is inspired by the first man quits his job, and resolves to be a YouTube gamer.

In the future, paper money is a thing of the past. Every transaction made is a cashless one.

However, since every transaction is tracked, a stunning amount of information can be collected on consumer habits and preferences. Companies vie with each other to attract the most number of consumers.

A young woman realises this, and manipulates the system by buying completely random stuff and getting her friends to follow her lead.

The companies catch on and start marketing campaigns based on her entirely random purchases, such as vegetarian cai png and pet hamsters.

Flush with power, she directs society into making ethical consumer decisions through the power of marketing.

Through her efforts, haze problems in Indonesia are eliminated forever.