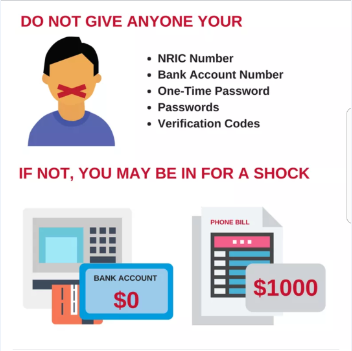 The Police have received several reports where victims informed that they had incurred charges to their mobile phone bills after providing a three digit PIN number to strangers whom they befriended over Facebook.

Between January and November 2017, the Police received 130 cases, which is an increase of 120% from the same period last year. The total amount cheated to date in 2017 is at least $16,000. These cases continue to be reported in December.

Take the following precautions to protect yourself:

a)    Do not share your personal information including OTP/Verification codes with anyone. Such information is useful to scammers and could potentially be used for purchases charged to your mobile phone bills.

b)    Be wary of friend requests from strangers on social networking sites. They may not be who they claim to be.

c)    If you receive a friend request from a friend on social networking sites, verify with your friend via another means of communication before accepting the request.