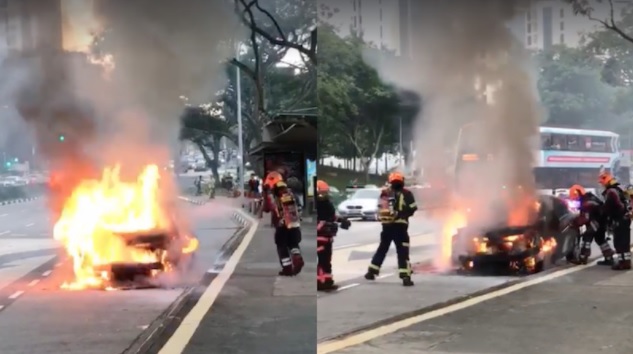 Commuters at a bus stop along Yio Chu Kang Road on Saturday afternoon witnessed a car bursting into flames shortly after the driver exited the vehicle. The Singapore Civil Defence Force (SCDF) confirmed that it was notified of the incident at the junction of Serangoon North Avenue 5 and Yio Chu Kang Road around 4pm.

According to The Straits Times, the driver had stopped his vehicle at the bus stop and stepped out after he realized there was smoke coming out of the bonnet of his black Opel. Soon after, the vehicle caught fire and flames engulfed the entire car.

A 48-year-old eyewitness to the incident told Shin Min Daily News that he was about to head out of his office with a colleague when he spotted the car in flames. Initial attempts to put out the blaze with a fire extinguisher were unsuccessful, but thankfully SCDF officers arrived at the scene and doused the flames in about three minutes.

No injuries were reported, and the SCDF’s investigations are underway.