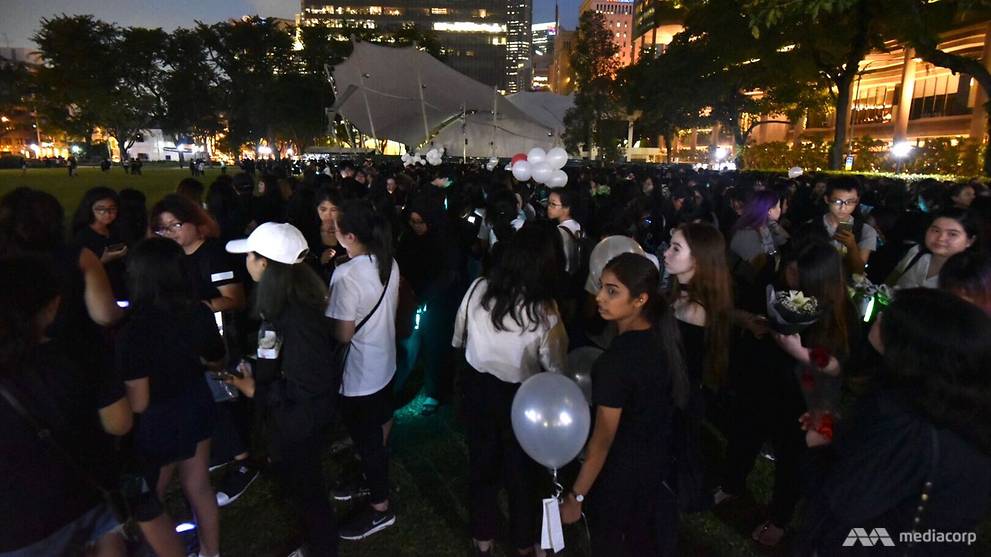 SINGAPORE: Hundreds of fans turned up at Hong Lim Park in Singapore on Wednesday (Dec 20) for a memorial to pay tribute to Kim Jong-Hyun, popularly known as Jonghyun.

The 27-year-old lead singer of Korean boy band SHINee died on Monday after apparently committing suicide. Since then, fans around the world have been mourning his death.

In Singapore on Wednesday, orderly queues started at around 6.45pm and snaked around the park.

Mostly young girls in their teens to early twenties, the Jonghyun fans wore black or white, bearing flowers for their late idol.

The main organiser, who wished to remain anonymous, told Channel NewsAsia that she was surprised at how big a news story the memorial has become.

"This (memorial) was meant to be very personal," she said. "And now it's this huge thing. I don't want to comment as to why my friends and I organised this, but I will say that Jonghyun as a K-pop star greatly influenced a lot of people."

The 22-year-old, who has been a fan of K-Pop since she was 14, shared with Channel NewsAsia that she "hopes this will raise awareness" about mental illness.

"Because  Jonghyun has a lot of young fans, I hope this raises awareness. Especially because mental illness is something in Asia that is still so taboo," she said.

The organiser is not part of any SHINee or Jonghyun fan club. She put together the memorial with the help of a few friends.

Many of the fans in the queue declined to say why they came down, saying they are "too upset to talk about it".

Crystal Goh, 19, shared that Jonghyun and SHINee was a big inspiration to her and taking part in the memorial was a way to grieve with fellow fans.

Another fan Jaymin Kee, 18, said Jonghyun was the first male K-pop star she "idolised". She likes him because of his "great voice" and because he is "caring", she said.

"I just hope the K-pop industry will be more aware of their artists' well-being ...  and I hope that everyone will pay more attention to people with depression," she said.

Salwah Abtat, also 18, said Jonghyun has "inspired so many people around the world".

"I just want to pay my last respects to him here," she told Channel NewsAsia.

Pei Xian, 26, said that she just wanted to take some time to remember the artist.

Another fan Sadikin, also 26, said that the event helped to "bring some closure to the shocking news of his departure".

father mother died also not so sad. mourn for someone who don't even know your existence is absurb