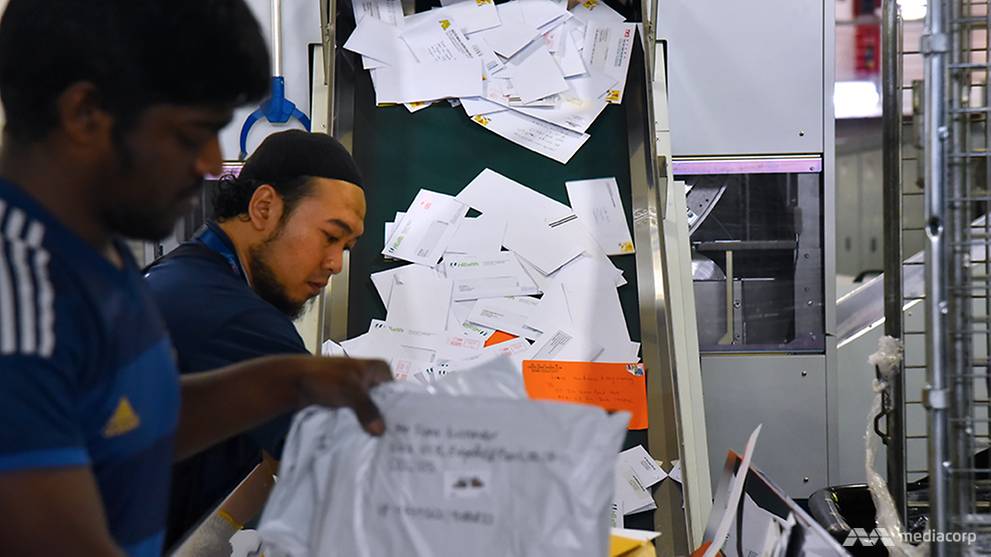 The SingPost Mail Processing Centre sees an increase in packages sent in during the year-end peak. (Photo: Gaya Chandramohan)

SINGAPORE: A cacophony of whirring and clacking greets you the moment you step into SingPost's Mail Processing Centre (MPC) at Paya Lebar. Hundreds upon thousands of letters and parcels are being carted around, tipped onto conveyor belts and fed into machines that zip them along as if they were light as a feather.

No matter how illegible the handwriting - the robust machines sort the endless trail of mail precisely by district, and then by each postman's route.

But the process of sorting mail still needs hundreds of human hands, and the centre has been buzzier than usual from early November, starting with Single’s Day on 11.11, the other e-commerce bonanza 12.12 and Black Friday. Coupled with Christmas and New Year's mail, it has been crunch time for weeks for the postal service.

The volume of mail goes up by 10 to 15 per cent during peak season, and while that does not sound like much - it comes up to a fair bit, considering the MPC handles an average of 3 million mail items daily.

An extra 20 staff members have been brought in to help SingPost in the lead-up to the year-end peak season. This is on top of its usual stable of 400 employees at MPC.

During the last three months of the year, the mail processing centre usually sees up to a 15 per cent surge in mail sent in. (Photo: Gaya Chandramohan)

And while the centre usually operates from 2pm to 6am on weekdays, this year’s onslaught required the centre to operate on Sundays between Dec 4 and 17.

During the festive mail mania, the centre operates on some Sundays to deliver on time. (Photo: Gaya Chandramohan)

The only mail-sorting centre in Singapore is also on the cusp of another busy period: Chinese New Year. In the past two years, the combined volume of Christmas and Lunar New Year greeting cards that passed through the facility numbered in the millions – 2015 saw 6.4 million cards, and 2016, 5.8 million cards. Even in this digital age, Singaporeans are still surprisingly old-school when it comes to season's greetings, said SingPost Centre's operations manager James Wong. “Letters are a form of personal touch. If you send a written message to someone, it has deep meaning to post the letter personally and have it reach the intended recipient.”

The centre also sees an average of 500 letters to Santa each year. No word though, on whether the senders get a letter or parcel in return.