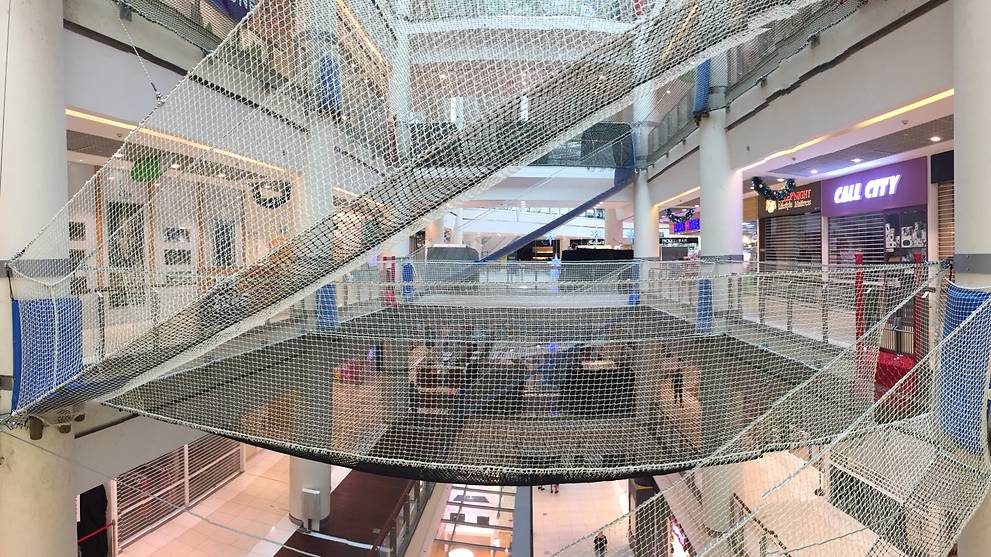 SINGAPORE: Fancy clambering and dangling three to six storeys up in the middle of a shopping mall? Or does the thought make you dizzy?

An upcoming elevated playground suspended by net structures at City Square Mall will be able to hold 60 people at a time, its operator Ultimate Entertainments Group told Channel NewsAsia on Friday (Dec 22).

The attraction, spread across six "levels", will feature a suspended ball pit with more than 10,000 balls, a slide, a maze which climbers can crawl through, paths, slopes, as well as a games and activity zone, which can be used for fitness and trampoline classes.

The attraction will be able to hold up to 20 people per level, and a total of 60 people at a time, it said.

The playground, which is set to open in the first quarter of 2018, consists of safety nets and high wire designed for trapeze and circus acts, said Ultimate Entertainments Group.

Responding to media queries from Channel NewsAsia about how safe the structure is, Ultimate Entertainments Group explained that the net structures "are actually safety features themselves".

The anchors holding the playground in place were designed to hold the weight of a car, the operator added. Ticketing details on the Airzone website states that participants are required to be under 120kg.

Ultimate Entertainments Group said it is working with Xtrem Adventures Group, which has designed and installed net parks in various countries like USA, China, India and Germany.

Airzone said the nets can hold up to 60 people at any one time or 20 people per level. (Photo: Facebook/Airzone)

"There are over a hundred net-based playgrounds or adventure courses throughout the world with most of them located in France or Europe," Ultimate Entertainments Group said, adding that most are in outdoor settings.

The operator said the attraction would "excite and maximise untapped spaces in between floors of City Square Mall".

The company added that pricing and session times for the Airzone playground at City Square Mall will be released soon.