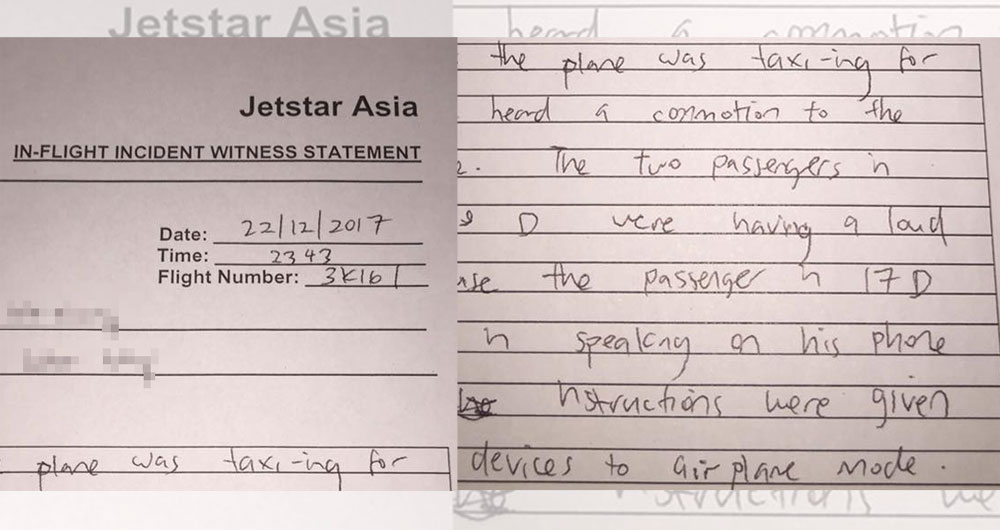 This was allegedly due to an in-flight incident that occurred when the plane was taxiing and ready for takeoff.

The plane was bound for Darwin, Australia.

According to passengers on the flight, a commotion broke out between two passengers when the plane was preparing to depart and the cabin lights had already been dimmed.

Eyewitnesses said the altercation between the two passengers started when one of them was still allegedly talking on his mobile phone as the plane was ready for takeoff.

As the passenger who was on the phone did not cease using his device, the other passenger snatched it away.

This prompted the passenger who was using the phone to shout for security.

It is understood that the plane was turned around as a safety precaution after the crew was alerted, as the female passenger also claimed she heard the word “bomb”.

It is also understood that the pilot made an in-flight announcement explaining to the passengers why the plane had to be turned around, mentioning it was for the safety of the crew and passengers.

The duo involved in the altercation were believed to be seated in one of the rows in the middle of the plane. They are also believed to be non-Singaporean.

The police and fire crew were deployed and waiting at the boarding gate by the time the plane turned back, passengers said.

The flight was half-full, according to passengers on board.

It is understood that statements from eyewitnesses were taken until about 3am.

Affected passengers have been rescheduled for a 7.15am flight on Dec. 23.

The two male passengers are believed to be taking separate flights.

We have reached out to Jetstar and Changi Airport for comment.

Right to turn back else no one knows what worse would happen in the air. Poor behaviour shouldnt be tolerated!