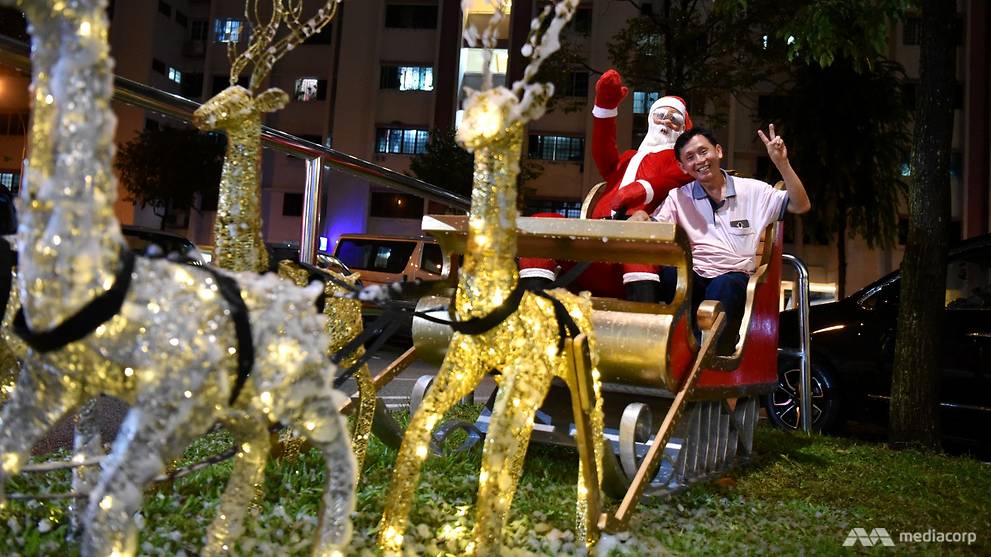 SINGAPORE: It's Christmas - and at Woodlands Street 13, Santa Claus and his sleigh are parked at the entrance of the car park next to Block 179.

But the real Santa is Mr Tan Koon Tat, the man who has brought festive cheer to the neighbourhood year after year - rain or shine, Christmas, Chinese New Year, Hari Raya or Deepavali, for at least a decade.

Mr Tan's generosity is well-known among his neighbours. Even those who do not know him well would pop by come Christmas-time to see if his trademark decorations are up.

This year however, Mr Tan has decided to take it one step further.

"You can't have Santa Claus without presents!" he said, beaming. "The sack (on the sleigh) is empty - but I'll be giving out presents to all children under the age of 12 every night."

The 57-year-old has prepared about 150 presents in anticipation of the children who will come to his neighbourhood to meet Santa. And he will give them out each night in the run-up to Christmas, until he runs out.

Coincidentally, his gift to the neighbourhood this festive season was completed on Friday (Dec 22) - which is his birthday.

The main attraction of this year's display - other than Santa himself - is a snow machine, which was a new addition to Mr Tan's display last year. Not entirely satisfied with last year's snow however, he bought a new machine this year.

In addition, he has built a special cupboard for both the machine and a fan, to help spread the "snow" to a wider area. His new snow machine can also run for about half an hour at a time - about twice as long as last year's - and he hopes it will bring joy to even more children.

ALL HE WANTS FOR CHRISTMAS IS TO SPREAD JOY

And Mr Tan definitely had kids in mind when he put together his display. This year's sleigh, which the carpenter made himself, was specially designed to accommodate more than just Santa Claus himself - there's room for at least one more adult and a few children, just so they can climb in it and enjoy themselves, he said.

Woodlands residents pop by the display for a photo. (Photo: Jeremy Long)

And while All I Want For Christmas Is You played in the background, Mr Tan's neighbours gathered to watch Marsiling snow for the first time this year.

His neighbour Peggy Chee, 75, could barely contain her excitement. Her eyes lit up as the snow machine whirred to life. With a bashful smile on her face, she told Channel NewsAsia that she felt like a child again.

"There's no other place like this. I'm really happy when I see this each year," she said. "And he pays for all of this himself. He is such an optimistic, generous man."

Mrs Chee also excitedly pointed out her favourite part of this year's masterpiece - rainbow lights that twinkle every couple of seconds.

"His decorations are always beautiful, but this year is very special because of these lights," she said. "And you know, we don't have to go anywhere else to see the snow - we don't even have to take a plane!"

When asked how much this year's decorations cost, Mr Tan kept mum. Instead he coyly said: "I think you can guess just by looking around."

He did however reveal that Mrs Chee's favourite lights cost about S$100 apiece, and he used at least four sets of them this year.

More than a photo opportunity, Mr Tan's decorations have become a rallying point for the community, which comes together each time the decorations are complete.

"It's very rare that he unites the neighbourhood with such a display," said a Woodlands resident who only wanted to be identified as Ms Ng. "It's great especially for the kids - they don't have to travel a long way just to see snow."

This corner of the car park next to Block 179 Woodlands Street 13 turns into a winter wonderland when the snow machine is turned on. (Photo: Jeremy Long)

Another Woodlands resident, Mr Sherman Ang, said Mr Tan has been doing this for so long, he has "lost track" of the exact number of years.

"I have friends from all over (Singapore) asking: 'What's your estate doing this year?' They come see it, or if not I just take a picture and send it to them," he said. "It gathers the community - everyone comes down to have fun, especially the kids."

Similar to last year, this display took about a week to put together. Almost everything is made from scratch, and even Santa himself is hand-stuffed with sponge.

But it almost did not come to life, after an order for five lifelike reindeer - which cost about S$1,000 apiece - failed to arrive.

"The reindeer I had in mind for this display are taller than these ones," Mr Tan said, taking out a photo of the reindeer figurines he ordered. "I actually placed the order in September this year, but as Christmas approached, they just never came."

Mr Tan originally ordered a different set of reindeer for this year's display, but they never arrived. (Photo: Jeremy Long)

While he was disappointed that his ideal reindeer did not make it in time for Christmas this year, he decided to use the ones from last year's display instead. If the new reindeer ever arrive, Mr Tan said he intends to incorporate them in next year's display.

This year's decorations will be up till Jan 1. The next big festival will be Chinese New Year, but Mr Tan said he may take a break then as his estate is undergoing upgrading, and he does not want his decorations to get in the way.

In all, Mr Tan said he hopes to make people happy with his decorations. (Photo: Jeremy Long)

With each year's decorations becoming more elaborate than the previous, does Mr Tan feel any pressure to up his game? He seemed almost puzzled at the question and shrugged it off.

"The better I manage to make it, the happier I am. When I see that the kids are happy, I am happy too. I just want to make others happy."

Fitting words for a celebration that originates with a carpenter who, too, sought to bless others whenever he could.