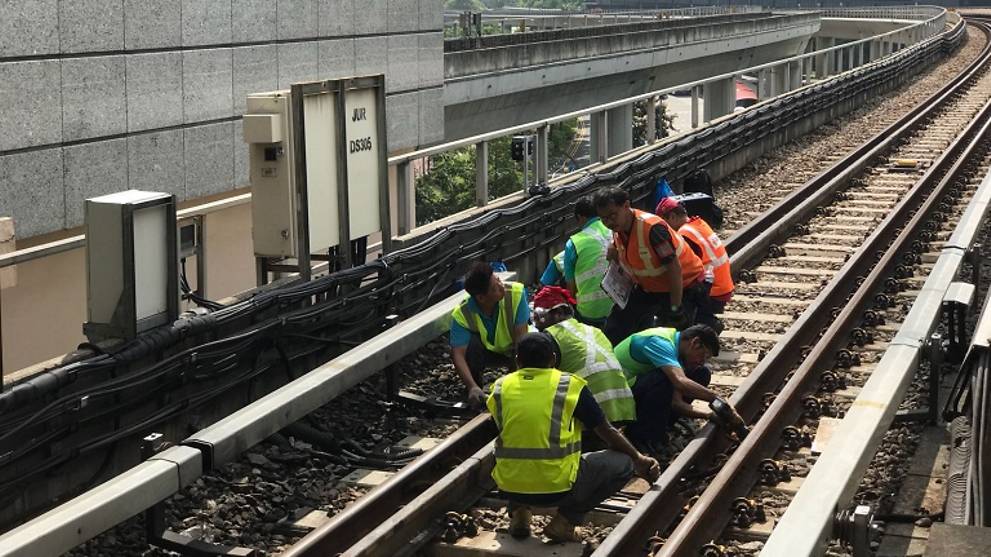 Getting Singapore’s rail network back on track in 2018

SINGAPORE: From Phase 3 of the Downtown Line to the Tuas West Extension, new sections of rail lines opened this year to bring more convenience to commuters. But 2017 may be remembered by Singaporeans for two major rail incidents instead.

Despite this, industry experts Channel NewsAsia spoke to said there are lessons to be learnt and noted that rail reliability could improve in 2018.

On Oct 7, a heavy downpour resulted in the tunnel between Bishan and Braddell MRT stations being flooded with rain water.

Train services were disrupted on the North-South Line for over 20 hours, affecting more than a quarter of a million commuters.

Investigations later revealed that a group of staff working for operator SMRT had falsified maintenance records, resulting in a water pump system to fail.

Eight staff were fired, and during a media conference to address the incident, SMRT's CEO Desmond Kuek pointed to "deep-seated cultural issues" in the company.

“For it to be revealed only in recent times is a bit surprising,” said Dr Lawrence Loh, Director of the Centre for Governance, Institutions and Organisations at the National University of Singapore’s business school.

“It's a bit like tea - culture needs to brew and I think what is surprising is it takes a storm in a tea cup for this matter to surface."

Though, Dr Loh noted, that turning a company around could be a long-drawn process, with some consultants suggesting it may take about three years to do so.

"You need to have very committed management engagement of all the employees,” said Dr Loh. “With that engagement as a sign, then you can actually get a sense of what the real thinking of the people are and if there are any areas you may want to further develop.”

This could be done by sending staff for training or technical classes, or helping them develop in other areas like communication and supervision of staff.

“I think we need to drill in as well as create this sense of urgency, sense of belonging,” said Dr Loh. “Everyone will have to do it not only for the organisation per se, but it's also in the employee's interest.”

But Singapore’s rail woes did not stop there.

On Nov 15, 38 people were injured when two trains on the East-West Line collided at Joo Koon MRT station - the second such incident in the MRT's 30-year history.

An SMRT staff walks past one of the two trains that collided at a train station in Singapore on November 15, 2017. (Photo: AFP/Toh Ting Wei)

Authorities said this was caused by a glitch or “software logic issue”, as a faulty train switched between old and new signalling systems.

As a follow-up measure, 19 stations along the North-South and East-West Lines saw shortened operating hours and two full-day closures in December.

While this left commuters in search of alternative modes of transport, it also allowed more time for staff to carry out works, accelerating the upgrade of the signalling system on the East-West Line.

This will now be completed by mid-2018, instead of the end of next year.

"I think the operator and government side tried their best to minimise the disruption to commuters as much as possible,” said Dr Zhou Yi, Deputy Chairman of the Rail and Transportation Technical Committee with The Institution of Engineers.

“But I think due to the incident of the Joo Koon collision, it really warned us that maybe we should play it in a more safe way rather than be too brief. If there is really another accident, I think it would be much more painful to the country."

Prior to the two major rail incidents this year, work to renew Singapore's rail assets have been ongoing from as early as 2013, as part of overall efforts to improve reliability,

So far, two out of six projects have been completed - with upgrades to the signalling system, power supply, trains and track circuits still taking place.

In addition, there are also plans to double the rail network by 2030 - which Dr Zhou said is likely to play a major part in improving reliability.

"With much more choices or alternative lines in operation, then it should ease or relieve some of the load in the traditional or old lines,” said Dr Zhou.

“By the middle of next year, we are expecting the resignalling project to be complete and maybe we give it one or two months for teething issues … I am very positive to see by end of next year, we would see much better reliability in our system.”