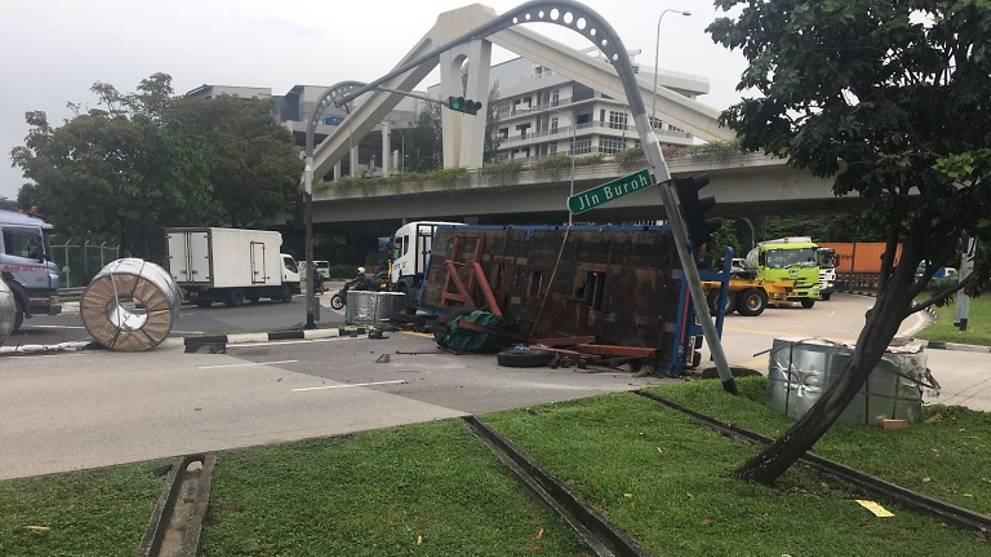 A lorry chassis lies on its side after an accident along Jalan Buroh on Wednesday (Dec 27). (Photo: Watson Wong)

SINGAPORE: The chassis of a lorry trailer fell off while the vehicle was navigating a bend and hit a lamp-post along Jalan Buroh on Wednesday (Dec 27) morning.

The police said they were alerted to an accident involving a trailer along Jalan Buroh at 8.40am.

No one was injured in the incident and police investigations are ongoing.

Photos of the incident showed a lorry trailer chassis overturned on its side, blocking the entire road.

What looked like a lamp-post by the side of the road was also shown bent over, seemingly after having sustained an impact.

The accident happened around 8.40am on Wednesday morning (Dec 27). (Photo: Facebook / Zhang Dong)

The scene along Jalan Buroh after an accident involving a trailer. (Photo: Watson Wong)

The Land Transport Authority warned motorists of an accident on Jalan Buroh towards Jurong Port Road after Jurong Pier Road in a tweet at 9am.

About five minutes later it tweeted warning of an accident on Jalan Buroh towards Jurong Pier Circus.