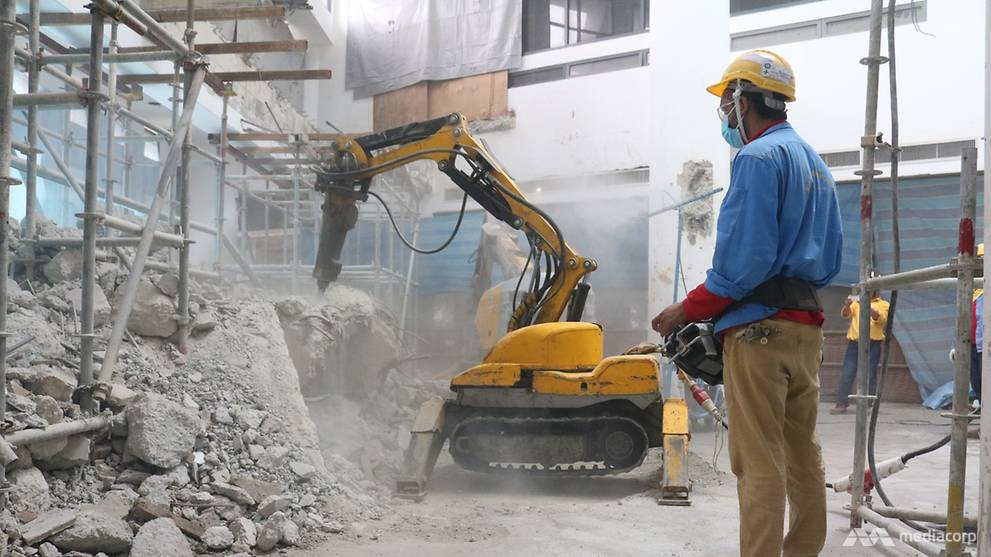 No explosives or swinging balls: How high-rise demolitions go down in Singapore

SINGAPORE: When a high-rise building in Singapore needs to be demolished, contractors don’t come in with a wrecking ball.

With demolition works for the iconic, multi-coloured Rochor Centre set to begin early next year, what exactly goes on when a building is pulled down?

Mr Lim, who founded the award-winning demolition contractor more than two decades ago, said wrecking balls take too long and make too much noise. Furthermore, buildings here are too tall and too close to each other.

That's also why explosives are not used. And you need someone with a lot of expertise to place the explosives in a way that brings the entire building down in one fell swoop, Mr Lim said.

“The worst part is if you cannot blast it down, how? It’s a big headache.”

So in most cases, contractors in Singapore use concrete breakers and crushers. “They hoist the machines all the way up to the rooftop,” Mr Lim said. “From there, floor by floor they hack it down.”

Sounds simple enough ... but Mr Ng said there is plenty of preparation and planning involved before work actually begins. There are meetings to attend and presentations to conduct.

“Even if the head knows what is going on, doesn’t mean the person on site knows,” Mr Lim said. “We must make sure everybody understand their role in the project.”

When a building owner puts up a tender for demolition, Mr Lim will first make a site visit.

Several things will be on his checklist.

He needs to map out how workers will enter and exit the building and how to dispose of the demolition debris.

He will also need to estimate the project duration - how long it would take to demolish the structure.

Delays are costly - with the penalty for not meeting a deadline amounting to tens of thousands of dollars a day, Mr Lim said.

He said delays could happen if there're many days of heavy rain while the project is being carried out or the contractor fails to meet standards set by the authorities. Mr Lim said the latter would usually lead to a pause in operations, possibly pushing back a project's completion by months.

There are also restrictions to factor in if the demolition work is going to be carried out near residential areas - within a 150m radius of the worksite. The contractor will have to stop work by 7pm on weekdays and 5pm on Saturdays. No work is allowed on Sundays.

Those concerns will need to be balanced by the project owner's demands.

He added that these factors, and the value of salvageable materials in the building, will determine how much the contractor bids for the tender.

According to Mr Lim, a small demolition project – involving a building the size of a semi-detached house – will cost in the thousands, while larger projects can go up to millions of dollars.

“After we visit the site, we will come up with a plan: How do I do it, what methods I should apply,” he said. “We will submit it to the client.”

Mr Lim will conduct a kick-off meeting with everyone involved in the project after the company is awarded the contract.

“We will discuss our scope of work, access, methods and safety,” Mr Lim said. “Regardless of whether you are the boss, worker or supervisor, everybody can contribute.”

He said this meeting is crucial as only those on the ground will know the challenges that might come up. “From there, we will find better methods to use.”

A worker and his supervisor in conversation on the ground. (Photo: Aqil Haziq Mahmud)

Mr Lim has to wait for the Building and Construction Authority (BCA) to issue a commencement permit before he starts work.

“Sometimes, they might go through your plan and approve,” he said. “If they feel the project is a bit more complicated, they might call the consultant, owner and contractor to come in for a presentation.”

“Demolition work plans must be prepared and submitted by an appropriately qualified person … before a demolition permit will be issued,” BCA said in a circular.

The use of a mist machine helps reduce dust. (Photo: Aqil Haziq Mahmud)

These plans should include an impact assessment report on neighbouring structures, design calculations and environmental protection measures, it added.

These environmental measures, Mr Lim said, include reducing dust by using a mist machine and minimising noise pollution by covering up the worksite.

With the green light given, workers will bring in generators to power the machines as the electrical supply to the building would have been cut. Metal cables will be salvaged and sold. Copper is particularly valuable and can be sold for S$10 a kilogramme.

Likewise, loose items like glass and window panels will be removed. Then, noise and vibration sensors are set up. Demolition works cannot exceed 75 decibels in the day and 65 decibels at night.

A vacuum cleaner is about 75 decibels, while sounds above 85 decibels are generally considered harmful.

The data provided by these sensors, which authorities have direct access to, will determine if noise complaints lodged by the public are valid, Mr Lim said.

Next, external scaffolding is erected to shroud the entire building. “This covers up the working area and prevents loose particles from flying out,” he noted. “The canvas also reduces noise.”

The building’s floors must also be supported so they can carry the extra weight of the machines, which might weigh more than 1,000kg each. The limit for one floor is usually two breakers and one excavator.

“When you break something, a lot of debris will fall on the slab (below),” Mr Lim added. “Directly, this creates extra loading on the structure.”

When it comes to the machines, Mr Lim prefers to use a specific type that runs on electricity and is remotely-controlled. Workers operate the machine from a distance using a console strapped to their body.

A worker operating a crusher from a distance. (Photo: Aqil Haziq Mahmud)

This machine, called the 'Brokk', is much safer to use compared to conventional types because an operator is not sitting on the machine, Mr Lim said, citing fatal accidents involving machines at demolition sites.

According to the Ministry of Manpower (MOM), the most recent demolition-related death was in 2013 at 275 Thomson Road.

A worker was clearing debris using an excavator when he entered a "weakened demolition zone, where demolition work had already progressed down to the first storey", an MOM spokesperson said.

"As a result, the underlying concrete slab that it was on gave way and collapsed to the basement level," the spokesperson added. "The excavator overturned onto its side, trapping the operator within the cabin against the beam of the collapsed concrete slabs."

MOM investigations revealed that the red-and-white safety tapes used to demarcate the area was ineffective as the tapes could be removed, damaged or displaced. In addition, no prominent warning signs or temporary barricades were placed in the weakened demolition zone.

In April 2014, the contractor, Hwa Aik Engineering, was convicted and fined S$60,000 under the Workplace Safety and Health (WSH) Act for that fatal accident.

The WSH Council said risks incurred during demolition work include overloading and improper removal of bracing members, which can cause instability to structural members.

Because the Brokk weighs 30 per cent less than the average hydraulic breaker, Mr Lim said, it is easier to control and puts less stress on the structure.

However, the versatile machine – which comes in different sizes and can be configured as a breaker or crusher – has an eye-watering price tag of S$300,000 for the 2.6-tonne variant.

“I always tell people I classify it as a Mercedes S-Class,” Mr Lim mused. “But in terms of human life, I think it is worth it.”

"You can say that demolition is quite dangerous," he said. "But if you do it properly, everything will be fine."

For safety, Mr Lim covers up gaps and building edges where workers could fall off and marks out a consistent, well-lit emergency escape route.

Once everything is in place, work can begin, starting from the highest floor.

Work starts on the floor slab first, followed by the beam and then the column or wall, Mr Lim said. This is because of how they support each other. And for obvious reasons, the stairs are the last to go down.

A breaker is used on thicker structures because it is more powerful. A crusher, because it generates less vibration, is used when there is a need to minimise damage to surrounding structures. The excavator is used to remove debris.

This debris is pushed to the ground through the lift shafts because they can take the impact and contain the noise. Loose concrete must be cleared often to prevent excessive stress on the structure, Mr Lim said.

As for manpower, a worker and an assistant operate one machine, while at least three others help out with general tasks, like operating the mist machine which damps down the dust, and removing the scaffolding when the floor comes down.

For the Rochor Centre project, Mr Lim estimates that at least 10 workers will be assigned to each block.

Workers removing the foundation of a building. (Photo: Ginlee Construction)

Once everything is brought down, workers have to dig into the ground to break the foundation of the building. At the same time, they have to ensure the soil does not collapse.

In the case of Rochor Centre, Mr Lim said, its foundation must be removed to free up underground space for tunnelling works on the North-South Corridor.

When everything has been taken down, what’s left is debris disposal.

A brief overview of how demolitions are done. (Source: Ginlee Construction)

Clean concrete, which is reinforced concrete free of bricks, tar and other types of debris, can be sent to construction companies for recycling. “Our roadside drains, footpaths and road kerbs can be built with recycled concrete,” Mr Lim said.

Dirty concrete, which includes debris like floor tiles and timber, are discarded. They cost S$70 a tonne at the incinerator or S$250 per tipper truckload for transportation to the landfill, Mr Lim added.

“It’s not good to dump everything together,” he noted. “Even soil can’t be mixed with concrete. If so, the disposal company will charge more.”

After this is done, the ground must be levelled up if there are no immediate construction works planned for the site. This involves putting on the topsoil and watering it for two to three months to ensure grass grows.

This entire process can take from a month to more than a year, depending on the size of the area or building that needs to be demolished.

In the case of Rochor Centre, he estimates that it will take five to six months for the job to be done.

“When the owner takes over, then your job is done,” Mr Lim declared.