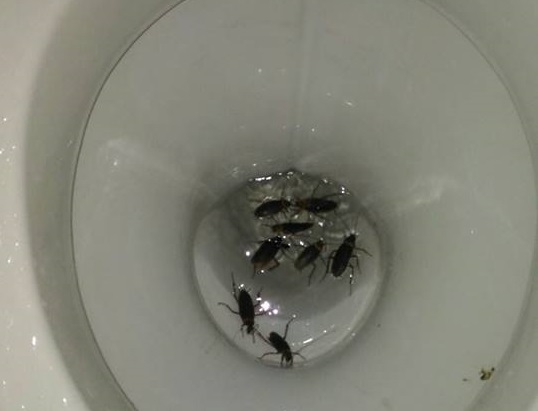 Contrary to popular belief, chalets in Singapore are still around.

But some, like CherryLoft Resorts, might not be giving families the fun experience we might remember from when we were younger — if a horde of online reviews in recent months is anything to go by.

Take this review, by one Nad Nadya on Facebook, for instance:

That’s eight baby cockroaches taking a swim in the toilet bowl at one of the resort’s units.

And here’s the text of her  (summary below):

The facilities and cleanliness of the chalet were poorly maintained.

The family found more than 2o cockroaches in the toilet in their first room.

They changed units, but found cockroaches in the toilet of the second room.

They changed to another unit, which thankfully was pest-free, but the floors, bedsheets, blanket, and toilet were dirty, which the user alleged made her body itch.

The family was also accused of stealing items from the room when they had not, and upon closer inspection the items were all found intact.

Unfortunately, hers doesn’t look like an isolated case. Straightforward checks on travel sites like Agoda, TripAdvisor and Google reviews revealed similar harrowing stories from other customers, from as early as March this year:

“The cockroaches infestations needs to be pondered especially when apologies for my experience is that I had to step on one sad cockroach as he/she decided to bath with me whilst I was bathing….

In swimming pool though also was a tard (tad) bit too salty to open my eyes without goggles… Thus I never really can swim laps eyes closed… Hahahahah.

Just giving my take on review….”

“Actually I do not want to give even a star but the system does not allow me to do so. The rooms are very old, dirty and dusty. The toilet is always flooded, especially around the toilet seat area, making the experience of using the toilet very traumatic and gross. There were big cockroaches found in some rooms. At night, squeaking noises were heard outside the room which I strongly believe are ….”

“after 10pm room started to be infested by flying coakroaches. staff came to spray after 2 being caught by hubby… soon after 3rd one came n fly… but thanks they let us change room.”

Another reviewer also provided photos of a dirty bathroom from the unit they stayed in:

Other reviews centred around the unhygienic and worn state of the rooms and furniture, as well as random extra charges:

“Overall was fine until I notice that the bedsheet comforter has not been wash properly & it has a period stained on it.”

“I’ve been to a budget hotel or resort quite a few times but this is the worst. Didn’t get to check in early despite requesting for it. There wasn’t even alot of staying at the time so i was still confuse as to why they didn’t acknowledged my request. The staff doesn’t seem to be bothered by the customers n their needs. Condition of the resort was old n dirty but i expected that for the price i paid so it didn’t really bother me that much. The worst was getting charge $10 for a towel stained from my Fiancè’s make up. According to them it needs “extra cleaning”..It’s make up, not super glue. Won’t be coming here again ever.”

Now to be fair, there were also positive reviews, but these were unfortunately dwarfed by the volume of complaints.

We have reached out to CherryLoft Resorts for their response to these allegations and will update this article when we have any further information.