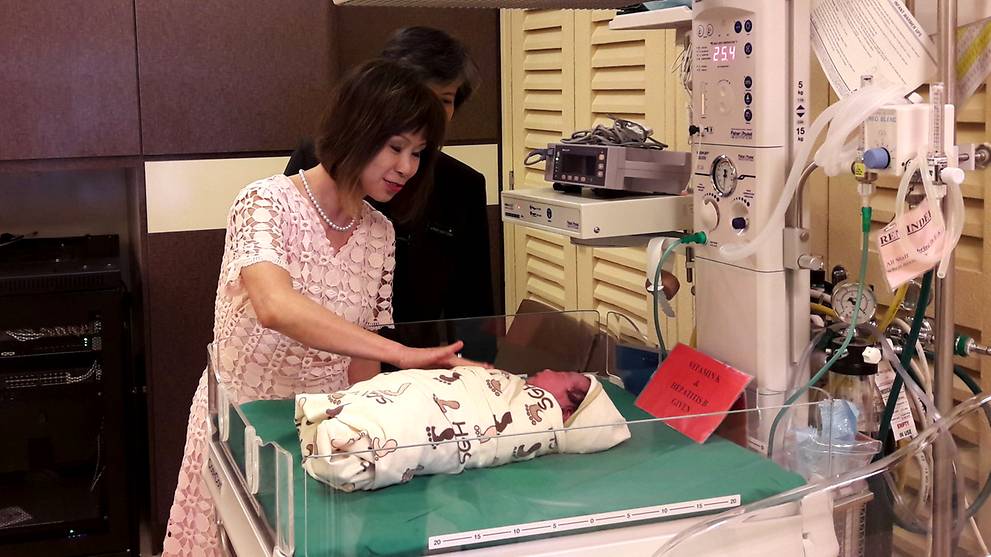 Senior Minister of State for Health Dr Amy Khor soothes a baby born this morning during her tour of the maternity wards. (Photo: Gwyneth Teo)

The move is part of an effort to reduce the financial burden that infant milk formula can place on young parents.

Senior Minister of State for Health Dr Amy Khor announced the initiative on Friday (Dec 29) during a visit to the labour and maternity wards at SGH. Nestle and Danone’s contracts with Singhealth will last from July 1, 2018 to Jun 30, 2019 with Singhealth, before being re-evaluated.

In Singapore, 86 per cent of mothers who gave birth in public hospitals this year had exclusively breast-fed their babies at the point of being discharged from hospital.

However, RTF formula remains a necessary part of hospitals’ preparations for newborn babies. RTF, which comes in liquid form and is not available over-the-counter, is what maternity wards feed newborns when their mothers are unable to or choose not to breastfeed them.

Associate Professor Tan Hak Koon, head and senior consultant of the Department of Obstetrics and Gynaecology in SGH, said that mothers who suffer from cardiac conditions or renal failure are unable to breastfeed. Premature babies who require a stay in the intensive care unit right after birth also cannot be breastfed.

“Many parents actually tend not to switch brands after they leave hospital,” Dr Khor said. “What we hope is that parents will have access to more affordable infant formula milk, and prevent lock-in to more expensive brands.

“We take into account the total expenditure of infant formula, not just when it’s in use in hospital, but thereafter - post-delivery and after discharge - the total cost until the child reaches one year of age.”

During the period of the contract, the retail prices of Nestle Lactogen and Danone Dulac infant formula powders will also be fixed.

Dr Khor also noted that this is just one of the Infant Formula Milk Taskforce’s efforts this year. Since being set up in May, the taskforce has facilitated the importing of cheaper brands of infant formula ​​​​​​​milk, and launched a campaign to educate parents on the nutritional needs of infants.

In a Facebook note from May this year, Minister of Parliament Sun Xueling compared the prices of similar cans of infant formula in Singapore and in other countries. In the note, she observed that the price of milk powder in Singapore is 1.63 times that in Malaysia, 2.07 times that in Australia, and 2.6 times that in the United Kingdom.

This would make Singapore one of the most expensive places in the world to buy milk powder.