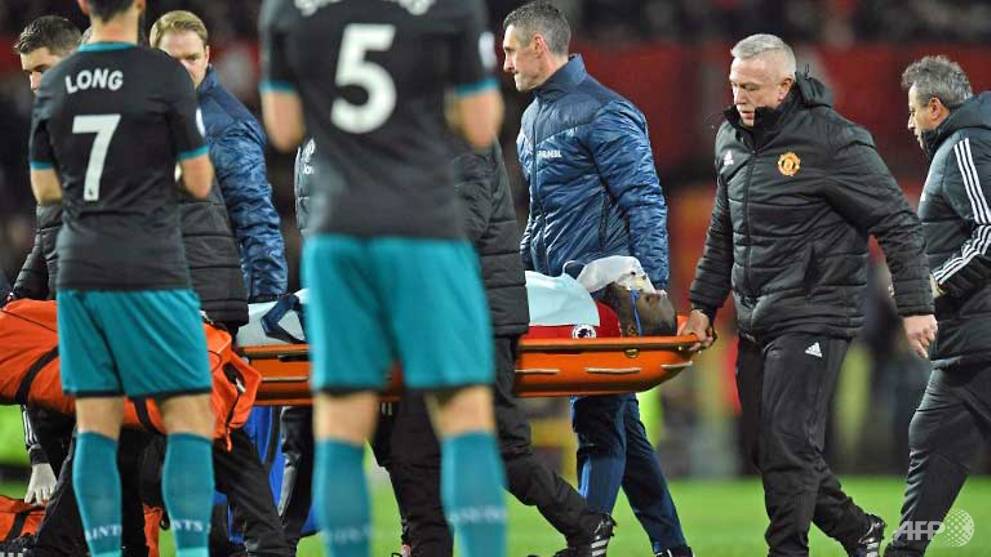 Manchester United's Belgian striker Romelu Lukaku is taken off on a stretcher after appearing to pick up a head injury during the English Premier League football match against Southampton. (Oli SCARFF/AFP)

LONDON: Romelu Lukaku was stretchered off after a clash of heads as Manchester United drew 0-0 with Southampton, while Mohamed Salah fired Liverpool to a 2-1 win over Leicester City in the Premier League on Saturday (Dec 30).

Lukaku crashed into Southampton's Wesley Hoedt as the pair contested an aerial challenge early in the first half at Old Trafford.

The Belgium striker lay prone on the pitch barely moving while he was treated by medical staff for five minutes. Lukaku remained conscious and was eventually carried off wearing an oxygen mask.

The injury continued a difficult period for Lukaku, who has scored just four times in his last 19 appearances for Jose Mourinho's side.

In the absence of Lukaku, Mourinho's men were unable to break down Southampton and had to settle for their third successive league draw.

"When you see a player leave the pitch like he did, it is usually two games at least," Mourinho said of Lukaku. "We missed easy chances but I'm really unhappy because we should have had a penalty."

Virgil van Dijk, signed from Southampton for a world record fee for a defender of £75 million (US$100 million), isn't able to play for Liverpool until January.

But the flaws the Dutch centre-back will be asked to fix were on display as Leicester took a third-minute lead at Anfield.

With Van Dijk watching on, Joel Matip carelessly conceded possession and Riyad Mahrez set up Jamie Vardy to slot past goalkeeper Loris Karius, selected in place of the dropped Simon Mignolet, for his 10th of the season.

However, Liverpool levelled seven minutes after the interval.

Salah then won it for Liverpool in the 76th minute, turning away from Leicester defender Harry Maguire and firing in at the Kop end.

Liverpool, unbeaten in 12 league games, remain fourth and now hold a four-point advantage over fifth-placed Tottenham Hotspur in the race to qualify for the Champions League.

"It is a maximum satisfaction to win like this. Today was pretty much perfect," Liverpool manager Jurgen Klopp said.

At Stamford Bridge, Chelsea climbed above United into second place.

Antonio Conte's side made the perfect start when German defender Antonio Rudiger rose above three Stoke defenders to head home from Willian's free-kick in the third minute.

Eden Hazard was rested on the Chelsea bench, but his replacement Drinkwater did a passable impression of the brilliant Belgian, the midfielder bagging his first goal for the Blues with a blistering strike from the edge of the area in the ninth minute.

Stoke were three down by the 23rd minute when Pedro finished off Willian's pass to put Chelsea on course for a fourth win in five league games.

"Every win is important for us, today it was important to get three points to continue our positive run," Conte said.

Carlos Carvalhal made an immediate impact at Swansea City as his new club climbed off the bottom of the table with a dramatic 2-1 win at Watford.

Carvalhal was the surprise choice to replaced the sacked Paul Clement just days after he'd been dismissed by second-tier Sheffield Wednesday.

The Portuguese coach's first game got off to a bad start when Andre Carrillo nodded home in the 11th minute.

But Carvalhal was heard lambasting his players at half-time and they responded to his words with four minutes when left Ghana striker Jordan Ayew equalised. Luciano Narsingh then won it for Swansea in the 90th minute.

Swansea are two points from safety after their first win in five games.

"We deserved the win. I must say to my players I'm very happy with what they did in a difficult situation," Carvalhal said.

Newcastle drew 0-0 with Brighton and Huddersfield Town shared a goalless draw with Burnley.