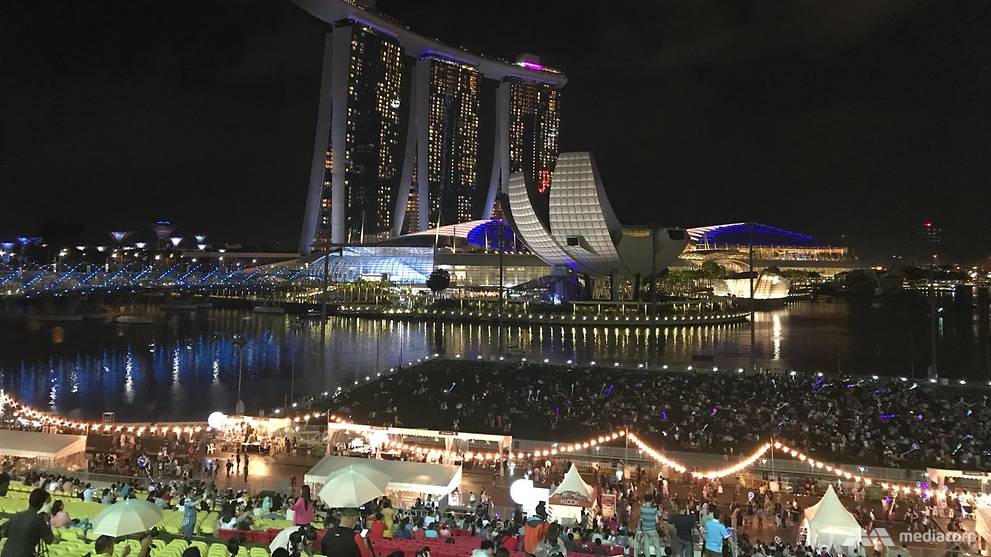 SINGAPORE: Revellers were out in force to usher in the New Year at the Marina Bay countdown event, undeterred by the wet weather on Sunday (Dec 31).

Those who braved the rain were rewarded with the first fireworks display of the night at 8pm. This year's event features minute-long fireworks on the hour, which will culminate in a six-minute extravaganza at midnight.

Several countdown events are taking place across the island but the one at Marina Bay is the largest, with more than 350,000 people expected to turn up, organisers said.

This year, there are also light projection shows. Armed with ponchos and umbrellas, revellers watched as The Fullerton Hotel, Merlion and ArtScience Musuem were transformed by projections every hour from 8pm.

Amidst the festivities, heightened security measures have been put in place. These include bag checks and announcements asking the public to be on alert for anything suspicious.

The Fullerton Hotel will light up every hour from 8pm until close to midnight. (Photo: Elizabeth Neo)

Out at sea, safety boats conducted patrols to ensure that other vessels kept a safe distance from where the fireworks will take place. Meanwhile, security boats from the Police Coast Guard were also on the alert for any security situations.

The Marina Bay countdown, which is in its 13th year, is organised by the Urban Redevelopment Authority (URA).