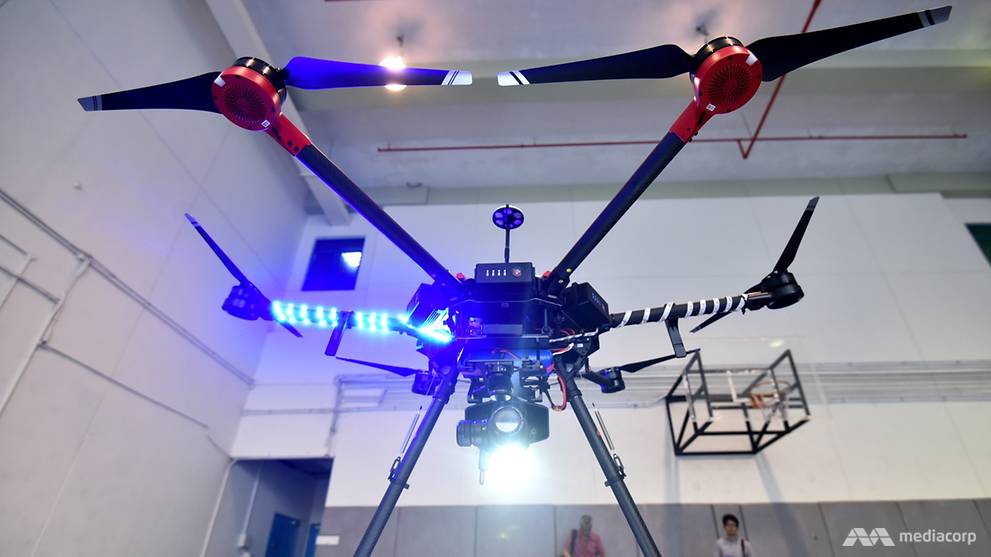 SINGAPORE: Police forces in other countries sometimes use helicopters to tail suspects with bright searchlights and loudhailers.

The Singapore Police Force (SPF) might not have a chopper, but its newest asset can do a similar job: An unmanned aerial vehicle (UAV) prototype equipped with new features like red-and-blue blinkers, searchlight and audio warning system.

The UAV was unveiled on Thursday (Dec 28) at the Tanglin Police Division, as part of a showcase highlighting the hardware deployed during the New Year’s Eve celebrations.

Since 2016 the police have been testing UAVs for traffic management and crowd monitoring, but it deployed its latest drone for the first time on Sunday during the countdown event at Marina Bay.

The drone can be used in hostage situations and search and rescue operations. (Photo: Jeremy Long)

“This prototype is the result of close collaborations between the police and relevant industry partners to build our UAV assets that can be used for different police operations,” a spokesperson said.

The drone, which took a few months to develop, can be used during search and rescue operations, hostage situations and public order incidents.

And its features are tailored for such missions.

The 16,000 lumens searchlight – an average car headlight is about 1,500 lumens – is bright enough for operations in forested areas.

Officers can also “communicate” with the public via the audio warning system, which can emit a loud siren and play pre-recorded messages. Audio messages can be heard from as far as 100m away.

When it comes to visuals, the drone’s full high-definition camera can make things appear five times closer, meaning it can spot a car licence plate clearly from the sky. It can also take photos and video and operate both day and night.

The 12kg drone can stay in the air for about 20 minutes before its batteries need replacing. To that end, the police also tested on Sunday a separate UAV connected to a power cable. This allows the drone to stay airborne longer.

The drone is operated using a console and tablet. (Photo: Jeremy Long)

On the ground, the drones are operated by a two-man team, comprising a pilot and safety officer, using a console fitted with a tablet. The police declined to reveal how many pilots it has.

Pilots must go through several months of training and pass a Civil Aviation Authority of Singapore (CAAS) certification test before flying the UAVs. In line with CAAS regulations, the drones can only fly up to a maximum height of 60m.

The UAV starred in a police showcase of assets deployed during the New Year's Eve celebrations. (Photo: Jeremy Long)

“The UAVs will provide a useful aerial situational picture to the command post, complementing the deployment of other surveillance systems such as closed-circuit television (CCTV) cameras,” the spokesperson added.

The police hopes to operationalise the drones by the fourth quarter of this year, after improving and finalising their design.

At the showcase, the police also revealed its new division command vehicle (DCV), which was deployed for the first time ever during the festivities at Clarke Quay.

The DCV is used in potentially lengthy operations that demand a higher level of coordination with other agencies. Some examples include hostage or suicide situations.

To handle such missions, the vehicle comes in-built with the latest police systems that allow officers to manage resources and communicate with various units and headquarters.

It is also equipped with a pan-tilt-zoom camera that can be raised almost 6m above the ground, allowing the police to conduct 360-degree surveillance and see incidents up to 150m away.

In addition, the DCV takes up less space than its predecessor, the bus-sized forward command vehicle. When fully deployed, the latter takes up the size of three buses, which is not practical in cramped areas like Housing Development Board car parks.

The DCV, which holds up to six officers and supports an outdoor briefing post, can be deployed in a matter of minutes, much faster than its older counterpart.

“During major incidents, SPF will quickly deploy the DCV to command and coordinate operations,” the spokesperson said. “The DCV can be set up expeditiously and is also a more nimble vehicle capable of manoeuvring through congested terrain.”

The police currently has two DCVs in its fleet and will continue to trial them before additional vehicles are rolled out to the six police land divisions.

POLICE CAMERA WITH SPEAKER AND LIGHT

The police also tested on Sunday four CCTV cameras with speaker and light capabilities. This camera is designed to get the public’s attention by stating that the police are on their way. This, for example, can be used to break up fights.

To achieve this, the light – which comes in standard or blinking mode – can be used to illuminate the location, while the speaker can play a pre-recorded message indicating that the police have eyes on the situation.

Currently, only one of the cameras – situated along River Valley Road because of the number of public entertainment outlets there – is permanent. The other three, located at Marina Bay, Bayfront MRT Station and near the Esplanade, were removed after the countdown event.

However, the police are conducting further trials on the camera in the hope of installing more islandwide.

“With the additional capabilities, the cameras serve not just as tools to prevent and deter crime, but can also allow police to respond to crimes or incidents in progress,” the spokesperson said.

“Potential perpetrators will be aware that police are monitoring their actions and this may help to prevent the situation from escalating further before police’s arrival.”