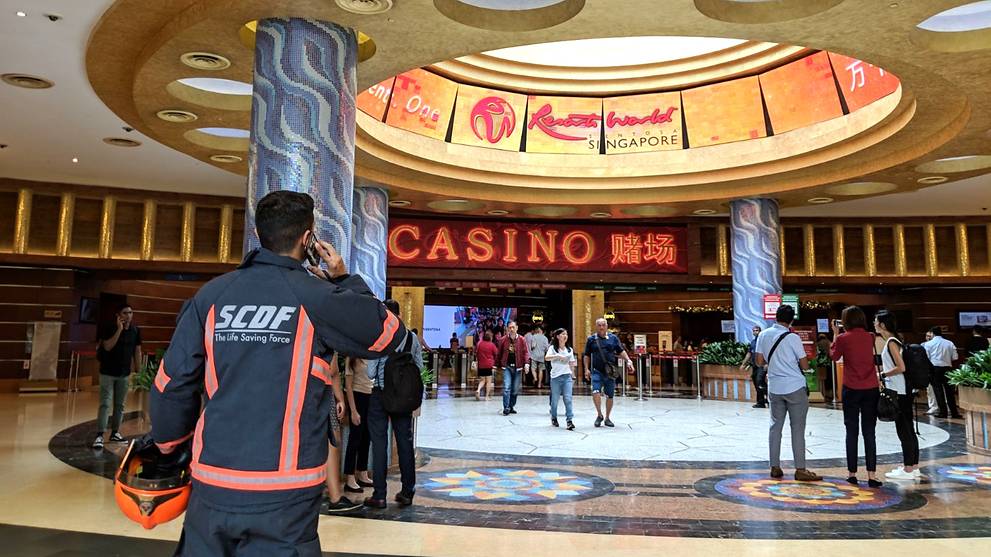 A Singapore Civil Defence Force personnel is seen outside the casino at Resorts World Sentosa on Jan 2, 2018. (Photo: Christy Yip)

SINGAPORE: Four people were injured after a ceiling collapsed at Resorts World Sentosa (RWS) on Tuesday morning (Jan 2).Channel NewsAsia understands that a ceiling board collapsed during repair works on the ceiling in the casino and that those injured are workers who had been doing the repairs.

The Singapore Civil Defence Force (SCDF) said it was alerted to the incident at 10.13am and that three people were taken to the Singapore General Hospital. Those hurt had head injuries, abrasions and cuts, SCDF said.

A visitor to the casino, John, said he saw one affected worker being helped out.

"I heard a loud sound," the 30-year-old said. "I think there was one person who was injured, but with very mild injuries. The security guard helped him out, but it’s not very serious. Probably the corner of (the ceiling board) hit him."

When Channel NewsAsia visited the scene at noon, at least four police vehicles were parked outside the casino.

The scene outside the Resorts World Sentosa casino on Jan 2, 2018. (Photo: Ruyi Wong)

This story is developing. Refresh for updates.

not a good start. mrt also breakdown this morning.