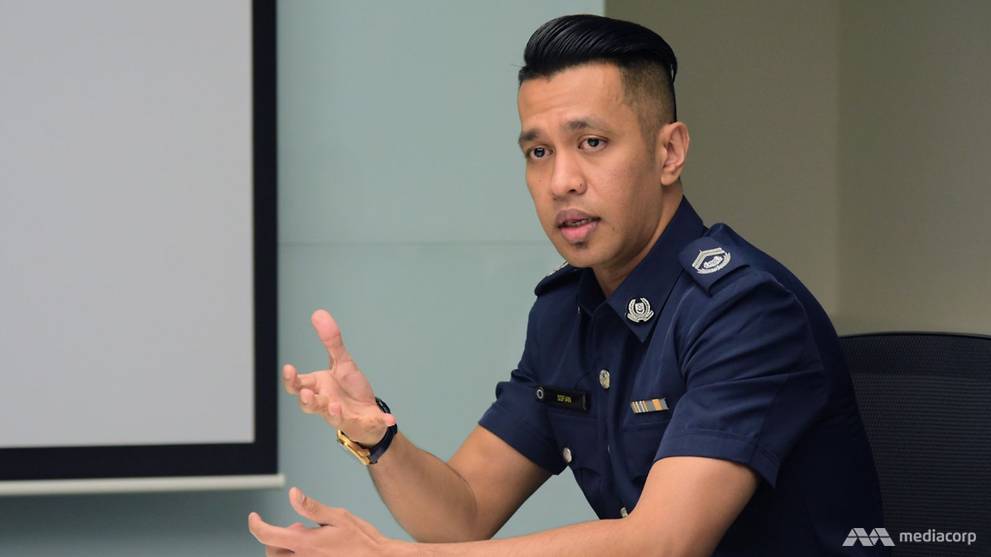 Police officer Sofian Othman recounts how he helped detain an 18-year-old man who had caused trouble with a pair of scissors at Bedok Mall on Dec 27. (Photo: Christy Yip)

SINGAPORE: It was a regular evening for police officer Sofian Othman, who was on his day off and buying a sandwich at Bedok Mall for an early dinner. But he soon realised that something was not quite right as he was leaving the mall, as he heard loud shouts coming from the McDonald's a short distance away.

That was when he realised that a young man was behaving aggressively, intimidating mall shoppers. Some looked scared, and quickly left the mall.

In his first interview with the media on Thursday (Jan 4), the 35-year-old investigation officer with the Unlicensed Moneylending Strikeforce recounted how he came to help detain an 18-year-old man for causing trouble with a pair of scissors at Bedok Mall last Wednesday.

The incident, which happened at about 6pm, saw the young man damage property at several stores in the neighbourhood mall.

Frightened shopkeepers and customers scrambled for safety as the man went about messing up items on display, shoving things to the floor and shouting at shoppers. The teenager also smashed the glass panels of some stores.

"My main concern was the safety of members of public and the damage that he would cause to the surrounding," said Mr Sofian, who has been in the force for 14 years.

Following his "police officer's instinct", Mr Sofian followed the young man from behind as he made his way into yet another shop, a watch store. By this time, a couple of other male shoppers were also trailing the man, seeing if they could help.

Mr Sofian signalled to one of them that he would approach the young man from behind, and attempt to catch him unaware and disarm him. The opportunity soon came as the man turned his back to Sofian to sweep more items off the counter of the shop.

It took five men, including Mr Sofian, to pin down the teenager.

The 35-year-old officer lauded the SGSecure programme as being key to raising public awareness on what to do when encountering difficult security situations. (Photo: Christy Yip)

"It was a bit chaotic at that time as (he) was behaving aggressively," recalled Mr Sofian.

The first question Mr Sofian asked the teenager was if he was okay.

“I engaged him in conversation to find out about his condition – whether he was injured, or if he needed any immediate medication. He mentioned that he was on medication but he did not have it on him. So to calm him down, I offered him a bottle of drink.”

Mr Sofian had earlier bought a bottle of water to go with his sandwich dinner. The young man appeared disoriented, but calmed down soon after.

The police arrived several minutes after and arrested the man.

Police officer Sofian Othman's main concern was the safety of members of the public and the damage that the man would cause to the surroundings. (Photo: Christy Yip)

In a Facebook post update on evening of the incident, the police said that the man had a history of mental health problems and was arrested for public nuisance. Investigations are ongoing and it is understood that the man is out on bail.

"I was quite heartened to see members of the public being very alert and coming forward to assist in this kind of situation," said Sofian.

He lauded the SGSecure programme as being key to reaching out to members of the public on what to do when encountering difficult security situations. However, he also reminded the public that personal safety should come first, and not to put themselves in harm's way at any time.

Great to know our police are not merely “working hours police”. We need these people who lived up to their vocation. 👍🏻