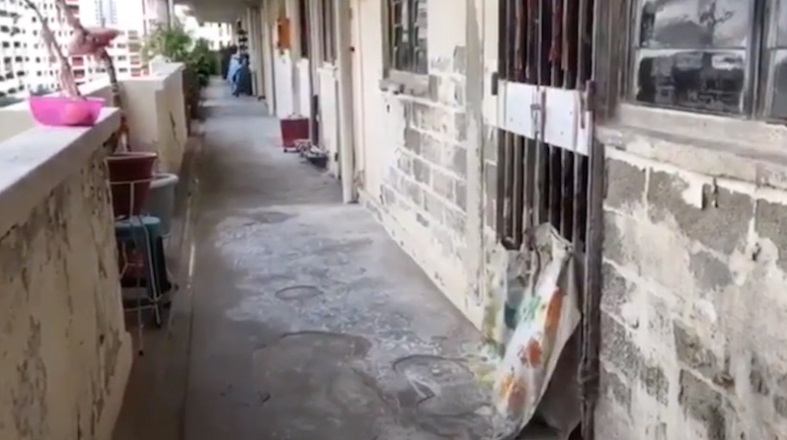 Residents at Block 55 on Lorong 5 Toa Payoh are no stranger to the bizarre antics of their neighbor, a lady in her 70s who’s been displaying odd behavior for the past decade. The woman, said to reside in a unit on the 10th story with her husband, typically starts off her day by yelling — at no one in particular, it seems — for about an hour at 7am, one housewife told The Sunday Times.

Other neighbors that Channel NewsAsia spoke to said that the woman’s unintelligible “shouting sessions” occur in the afternoon and evening as well. Some lamented that the yelling has been going on for years, and the tirade often contains swear words in Hokkien and Cantonese.

The woman has also been spotted throwing burning items over the parapet and splashing some kind of corrosive liquid outside her flat.

According to the culprit’s next door neighbor — who related her long-suffering story to CNA — she has discovered grains of salt and ashes on the front door and windows of her own unit, as well as oil on her laundry. The 78-year-old retiree believes the woman is the one behind these strange antics.

“It’s like living in a horror house… is this fit for human living?” she told CNA.

Photos of the unit’s exterior and its common corridor have been circulating on social media, showing the extent of the destruction wreaked by the woman, with peeling paint on corridor walls, damaged and uneven floors, and corroded metal pipes.

Residents said that they have reported the neighbor’s behavior to the police in the past, but nothing much has changed.

In response to media queries, the chairman of the Bishan-Toa Payoh Town Council, Chong Kee Hiong, said that the town council and other agencies are aware of the woman’s “irregular behavior”. He added that the police have also assessed that the woman poses no danger to herself or residents, TODAY reported.

Chong told TODAY that the woman lives in the rental flat with her husband, and that the town council has repaired some of the damage she caused by scrubbing the walls with a mixture of salt, vinegar, and baking powder to “get rid of spirits”, but her actions have not ceased, despite warnings.

He added that the town council, Housing and Development Board, resident committees, voluntary welfare organization Care Corner, and the neighborhood police centre have been working together to resolve the matter, even though the woman has refused repeated offers of help. Relocation “would not solve the primary problem”, he said, but alternate housing arrangements are in the works if the woman’s behavior persists. An odd sentiment, considering that the woman’s freakish behavior has been persisting for years already.

she could be demented, need to go to a home. sad.

The woman shd be admitted to IMH, if not she shd. Ensued for vandalism