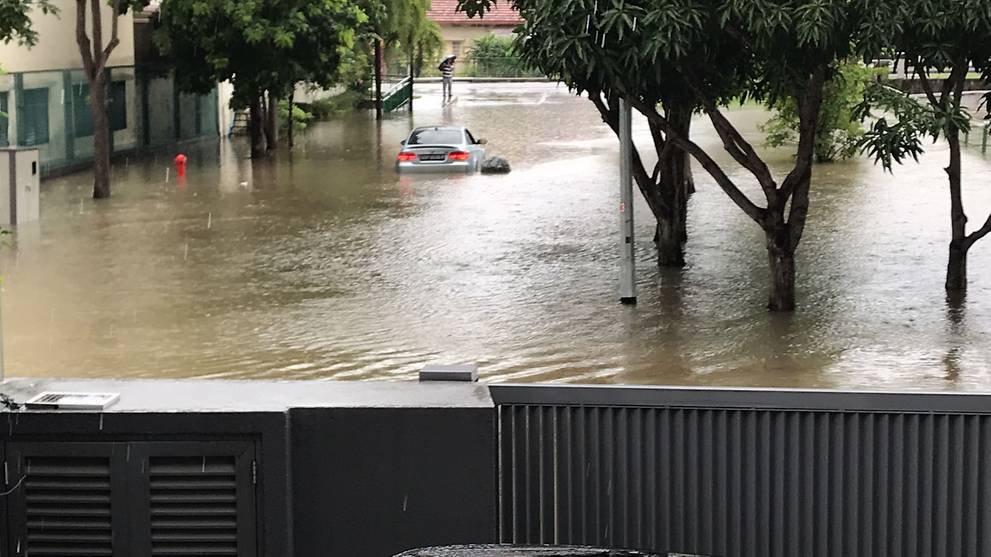 SINGAPORE: Some residents in the eastern parts of Singapore woke up to more than Monday blues on Monday (Jan 8) - some had to face murky brown water, coming right up to their doorsteps.

"The water came into the driveway, up to the front of my car," said retiree Mr Lim, who lives along a stretch of terrace houses along Jalan Greja. The low-lying residential area in Bedok was one of those affected by the flash floods on Monday.

“I’ve lived here for over 30 years. This is the worst flash flood we have experienced,” said the 67-year-old.

PUB also sent out alerts on social media, warning that there was "high flood risk" at several waterways such as Bedok Canal, Sungei Kallang and Sungei Tongkang.Channel NewsAsia visited the private estates next to Bedok Canal shortly after the PUB alerts came in. While the flash floods had subsided, there were signs of water damage.

Mr Lim clearing the loose soil left from his fallen potted plants, some of which were submerged in the flash flood. (Photo: Christy Yip)

Mr Lim was in the midst of clearing up debris from fallen potted plants outside his house. He said water at the walkway outside his house came up to 20cm, submerging some of his smaller plants.

He said that the last time flash floods occurred here was eight to nine years ago.

Businessman Alex Lo said he thought it was just another rainy Monday morning until his wife alerted him that flood waters were gathering outside. “(I was) so worried that the water level would rise further,” his wife Corinne said.

The Los live in a corner terrace along Jalan Greja, three streets down from Jalan Nipah which was flooded. Drainage in the area is connected to Bedok Canal and is subject to tidal influence, PUB said.Mr Lo said water levels peaked at around 9.30am, making it impossible for cars to drive through to get to Bedok Road.

“One driver was unfortunately caught in the high waters. He had a tough time climbing out of his car,” recounted Mr Lo. The driver had to call a tow company to take the stalled car away, he added.

A stalled car from the flash flood being towed away. (Photo: Christy Yip)

“I can’t imagine if it was during high tide. The flash flood would have been worse,” said Mr Lo.

A couple of Jalan Greja residents noted that construction works are ongoing at the canal behind their estate. PUB said in a statement on Monday that drainage improvement works are already underway to improve flood protection for the various locations which were hit by flash floods.

The agency also said the flooding was caused by intense rain and that half of Singapore's average monthly rainfall in January fell on Kim Chuan Road in Bartley in the span of four hours.