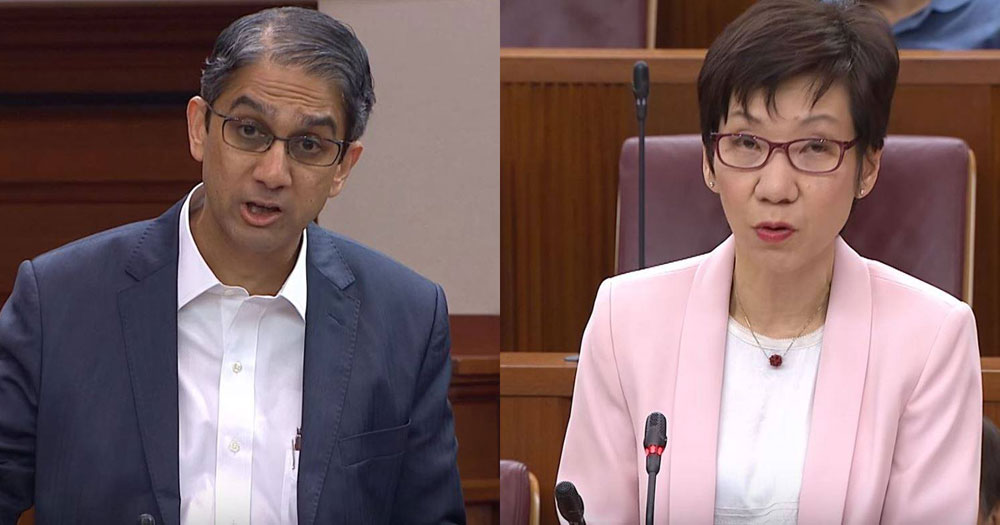 A potential clash between PAP’s Grace Fu and Workers’ Party’s Leon Perera was something to look out for during the Parliament sitting on Jan. 8.

But for those who were expecting some feisty political exchange to start the year, they would be somewhat disappointed: It fizzled out before it even started.

Grace Fu gets the apology she wanted

In the end, Grace Fu, Minister for Culture, Community and Youth and the Leader of the House got what she wanted: An apology from Non-constituency Member of Parliament Perera.

Here’s a flashback to the demands she made on Jan. 3.

Fu had written a letter to NCMP Perera to request that he apologise to the other MPs in Parliament for misrepresenting facts and to withdraw the false allegations against Mediacorp over the editing of Parliament videos.

Fu, called on Perera , said this was necessary to set a correct example for maintaining clean and honest politics in Singapore.

Perera apologised but maintained he did not deliberately mislead Parliament

Perera, who so far had not made any substantive statements in response to Fu’s letter, apologised by reading out a personal statement in Parliament.

He acknowledged his “memory of the incident was inaccurate”, but maintained that he did not deliberately mislead Parliament.

The apology was accepted by Fu and their exchange was over in five minutes.

Okay, nothing to see here.

Read the full exchange between Perera and Fu transcribed below from :

I confirmed that Mediacorp had explained this to me in February 2017 and I had accepted that.

I would like to apologise to the House for all incorrect recollections of the chain of events in February 2017 contained in this exchange as per house conventions.

However, I did not deliberately misrepresent the facts of that incident to this House.

Firstly, I did not plan to raise this during the supplementary questions. I did so off the cuff and only in response to a request to enumerate any incidence of editing that I knew of. As it turned out, my memory of the incident was inaccurate.

Secondly, I did acknowledge my memory might well be imperfect, as I prefaced it with the phrase quote ‘if my memory serves me well’.

Thirdly, I stated explicitly, and twice on that day, that the incident had been resolved amicably and did not accuse Mediacorp of partisan editing of a video clip in that incident, which makes the matter of when the clip was corrected immaterial.

Secondly, whether and how videos are edited, which was also clarified by the PQ that there is editing and in so far that means the arrangement of parliamentary exchanges in the clips etc but not verbatim editing of the exchange within a particular clip.

And thirdly why livestreaming of Parliament is not provided, an issue that SMS Chee explained the government’s position which is one I disagree since live-streaming would remove any concern about the reflectiveness of clips of particular exchanges are uploaded sometimes after the event.

Grace Fu: “The fact is that the member has indeed made untrue allegations and I thank him for acknowledging his misleading statements and also acknowledge his apology to Parliament.

I’d like to stress here that MPs are given parliamentary privilege to speak freely and surface different views but this must not be misused to misrepresent facts or mislead Parliament.

I’m glad Mr Perera has clarified his statement by withdrawing his false allegations against Mediacorp and apologising to Parliament.

Mr Perera has indeed acknowledge he has made a mistake in recollecting his facts. I will not want to read too much into his intentions whether there was indeed deliberate allegations against Mediacorp but statements which were wrongly made in this House deserve to be retracted if indeed untrue so the members are able to benefit from discussion and also to restore trust on each other’s statements made in this house.

It is only in this way that we are able to have useful and effective discussions in this House, because we believe what we say here, we have a serious basis for them and we will not make any statements unless we are very scrupulous with the facts backing them.

So I hope this serves as a timely reminder for all members of the house of the high standards of integrity and honesty we expect in this House.”