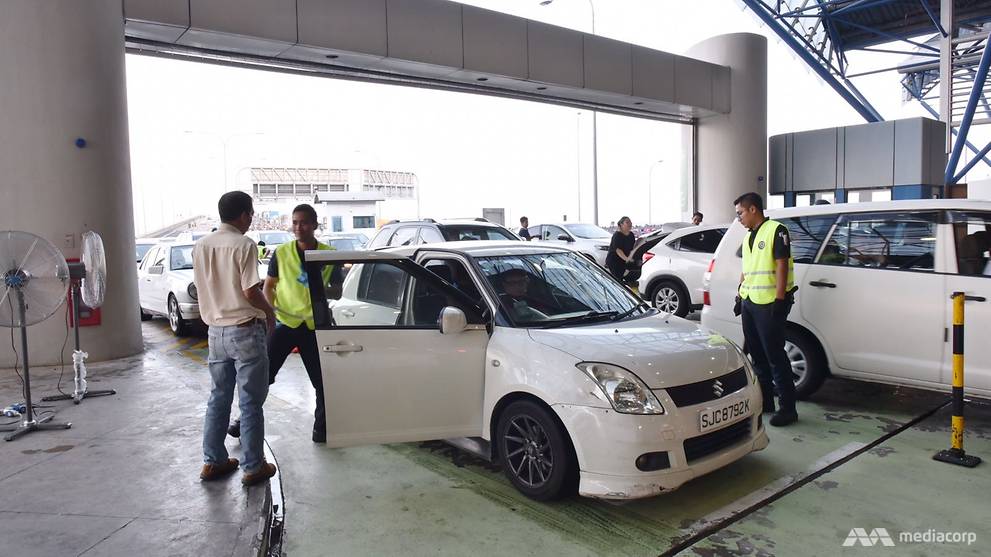 SINGAPORE: Immigration officers will be soon be empowered to search individuals they suspect are carrying offensive weapons within the vicinity of a checkpoint, according to a proposed amendment to the Immigration Act. Currently, Immigration and Checkpoints (ICA) officers' powers relating to search are limited to authorised areas.

This means that ICA officers may perform searches in public areas in Changi Airport and the bus stop outside Woodlands Checkpoint. ICA and police officers will also be able to search individuals if they suspect an offence has been committed within or in the vicinity of authorised areas.

Speaking during the second reading of the Immigration (Amendment) Bill in Parliament on Monday (Jan 8), Second Minister for Home Affairs Mrs Josephine Teo said that existing powers are not sufficient to protect the checkpoints in today’s security climate.

ICA officers operating within and in the vicinity of authorised areas will also be accorded similar powers as those given to the police under the Criminal Procedure Code (CPC). ICA officers will be empowered to arrest the individual if he is reasonably suspected to have committed an arrestable offence under Singapore laws.

“This will enable ICA officers to respond to any security threat without having to wait for the arrival of police officers,” Mrs Teo said.

Post-incident investigations, including the prosecution of the arrested persons in the Courts, will remain the police’s responsibility, Mrs Teo said. Once ICA officers have made an arrest, they will have to hand over the accused to a police officer as quickly as possible, for police to start their investigations.

The Bill will also allow ICA to collect personal identifiers, such as photographs, from travellers transiting through Singapore.

“This will allow ICA to screen transit passengers more effectively, to better detect travellers of interest," Mrs Teo said, adding that the Bill will also make clear that ICA has the powers to collect personal identifiers from Singapore visa applicants, including photographs and other biometric identifiers.

MPs asked if ICA officers are prepared to take on more responsibilities that will come with these expanded powers.

MP for West Coast GRC Patrick Tay asked if arrangements will be made to ease ICA officers into their new duties so that the additional duties are not too onerous, given that they already dealing with large numbers of travellers daily while under expectations from travellers for timely clearance at checkpoints .

Mr Tay, who is also a member of Government Parliamentary Committee for Home Affairs, also noted that the training requirements for ICA officers and police officers are different.

Fitness level requirements are also different, he added, as he queried the measures being taken to prepare ICA officers to carry out their functions. He also asked if the salaries of ICA officers will be raised to take into account their extra responsibilities.

MP for Marine Parade GRC Associate Professor Fatimah Lateef also asked if there will be some psychological preparedness training , briefing and counselling for these ICA officers.

“My concern is that police officers have been prepared for these types of work from the beginning of their career but these ICA officers may not,” she said.

While MP for Nee Soon GRC Louis Ng asked if it was necessary for ICA officers to be given the powers to detain a person for up to 24 hours under before handing them over to a police officer, given that the powers are transitory, MP for Bishan-Toa Payoh GRC Saktiandi Supaat described such a procedure as “cumbersome”, asking why ICA cannot be given the authority to detain the suspect for more than 24 hours and carry out the investigations required if it was a simple offence.

In response, Mrs Teo said that joint and on-the-job training are underway, and that more than 900 officers have been trained. She stressed that ICA officers will not have to become police officers, and that their training will be specific to becoming first responders.

Appropriate training courses will equip them in a few areas, including interview skills and search techniques. She added that ICA officers undergo psychological training during their basic training.