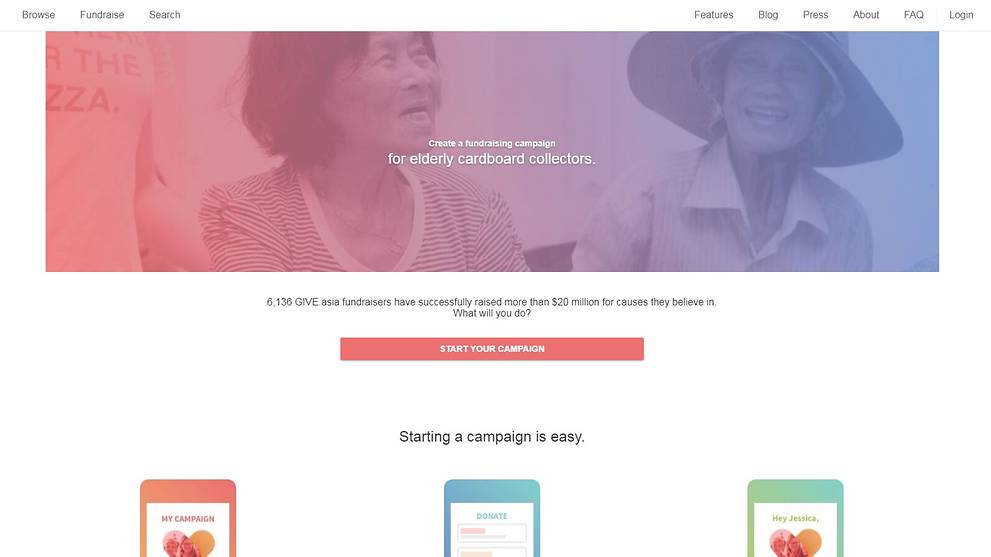 Screengrab from the website of Give.asia, a popular online fundraising platform.

SINGAPORE: Members of the public who aim to raise funds on crowdfunding platforms and social media will have to adhere to new regulations, following changes to the Charities Act passed in Parliament on Tuesday (Jan 9).

In her speech, Minister for Culture, Community and Youth Grace Fu, said that the changes come as the charity landscape has evolved since the last time the Act was amended in 2010.

As such, the amendments seek to, among other things, strengthen the governance, accountability and transparency of charities and fundraisers.

Ms Fu said one of the changes to the Act will be to amend the definition of “fundraising appeal”, so as to clarify that all fundraising appeals, whether big or small and online or offline, are subject to regulation.

This comes amid the growing reach of online fundraising appeals, which has seen substantial amounts of donations in some cases.

She cited the example of a case where the parents of a baby born with only a part of her oesophagus managed to raise S$1.2 million - mainly through online donations - to help their daughter get specialist surgery in the United States.

“It is heartening to see Singaporeans responding generously to these appeals,” Ms Fu said.

“However, the reach and scale of these online appeals highlight the need for a regulatory regime that promotes transparency and accountability so as to maintain a high level of trust and integrity, including in the online giving environment.”

With the change, Ms Fu said, fundraisers will be required to provide clear and accurate information to donors as well as manage and use donation money responsibly.

In the event of misconduct in a fundraising activity, Ms Fu added, the Commissioner of Charities will be able able to protect donors by putting a stop to or restricting that activity.

During her speech, however, Ms Fu also acknowledged the need to refrain from over-regulation, which could stifle charitable efforts as well as charitable giving.

Regulatory requirements placed on fundraisers will be “reasonable and fair” and take into account the nature and size of the appeals, Ms Fu added.

“We will review our fundraising regulations to minimise administrative burden on small-scale and private fundraising efforts, in particular, appeals for local causes, and exempt them from some of the requirements,” Ms Fu said.

For example, Ms Fu said, authorities will not expect detailed accounts to be maintained for “small” fundraising efforts conducted among family and friends for a local cause.

On the other hand, charities and public institutions who count fundraising activity as one of their core functions will be subject to regulations such as keeping proper accounting records because they have a public duty to ensure high standards of accountability and good governance.

Meanwhile, Ms Fu also shared that her ministry is working with major crowdfunding platforms in Singapore on an Industry Code of Practice.

The Code will include measures such as the need to provide up-to-date information on funds raised and keep proper records of donations received and disbursed.

Fundraisers will also be required to declare their awareness and compliance with key regulatory requirements when using the platforms.

TERRORISM OFFENCES, MONEY LAUNDERING TO BE INCLUDED IN DISQUALIFICATION FROM KEY POSITION

Ms Fu said the regulatory regime should also ensure that charities are managed by those who can help maintain public trust in the sector.

Responding to questions by NMP K Thanaletchimi and MP Alex Yam, Ms Fu said that the risk of charities being used as a front for unlawful activities is real and that the amendment will seek to strengthen the regulatory regime against such emerging risks.

“While we have not taken action under the Act against charities for money laundering or terrorism financing related offences, the Commissioner has carried out targeted reviews and worked closely with law enforcement agencies to monitor the vulnerabilities that charities sector may be exposed to,” Ms Fu said.

She said that it only takes one case of a local charity being involved in such activity for public confidence to be shaken.

While all the members spoke in favour of the Bill, some also expressed their hope that the next review of the Act will be more comprehensive, bolder and visionary, to reflect a sector that has to cope with more diverse needs.

“There will be an increasing number of people requiring support, more complex needs, and more interwoven issues,” Ms Chia said.

In such an environment, there is a need to change society’s mindset and the charity model as a whole.

This means professionalising the sector, for example, with better remuneration. This is especially important for backend staff, who ensure the organisation functions efficiently and meet compliance standards.

MP Denise Phua suggested having an Industry Transformation Map for the sector, much like what has been done for other sectors of importance.

For example, she said, charities should be able to diversify their income streams and not just rely on donations. This can be done by developing relevant services needed by their beneficiaries.

“Although policing of fundraising appeals is important in order to retain public trust in charities, future reviews of the Charity Act should look at how the COC (Commissioner of Charities) might support social enterprises or other forms of income streams in the charities,” Ms Phua said.

Agreeing, Ms Fu said the Commissioner will work with partners including professional bodies to engage charities and share “know-how”.

Totally agree with this! Regulatory rules.should be set lar. if not every AhGou n Ahmao can happily do crowdfunding, no one knows what happen to e funds. So many sad cases where public have donated n after that unsure what.happen to funds n recipients.