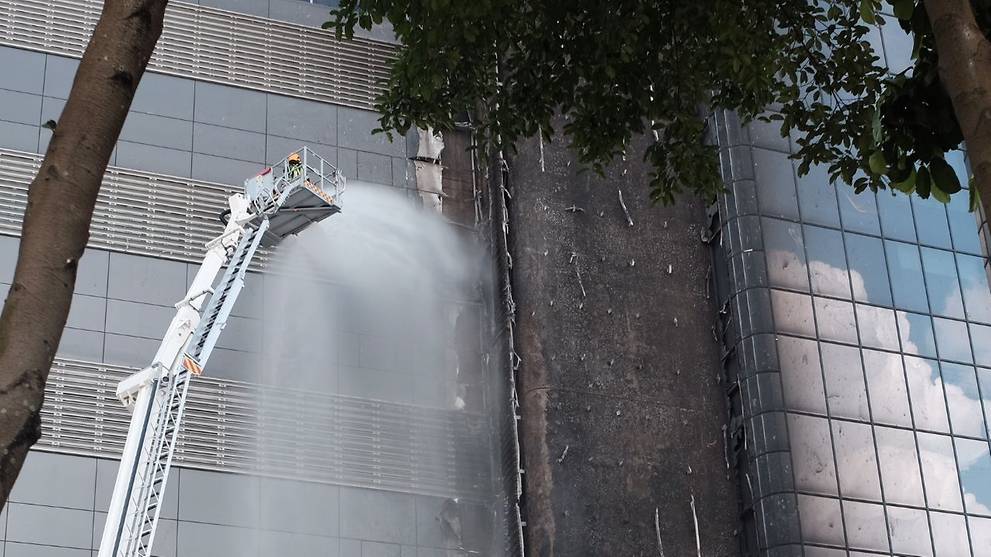 A fire which killed a 54-year-old woman last May prompted investigations into cladding used in building projects. SCDF has been testing cladding material and visiting buildings to check fire safety requirements.

SINGAPORE: Home Affairs Minister K Shanmugan said that while Fire Code non-compliant cladding are in the process of being tested or taken down, the SCDF has been assessing the safety of buildings and publishing the results to the public.

Mr Shanmugam told Parliament on Wednesday (Jan 10) that “fire safety is absolutely important which is why SCDF makes that assessment first while the testing is going on because testing takes some time".

“Where there is no unrestricted access to the buildings, SCDF requires the building owner to inform all the tenants of the nature of the cladding and the issues surrounding so the tenants can make a considered assessment even though we say it is safe.

"We believe it is safe but we think the tenants ought to know. Where there is unrestricted public access, we think that should be made public and it’s up on the SCDF’s website. That’s the approach that’s being taken.”

Mr Shanmugam added that public safety is of utmost importance when it comes to fire safety regulations.

“In respect of other brands of cladding, what has been doable has been done. We’ve contacted industry partners, we’ve required Qualified Persons (QPs) to give us returns, to explain, to relook at their building, make a second round of check in terms of, ‘We’ve identified these brands as being problematic, they better check.’ … We’ve also ask for an annual audit to be expedited. And this should cover all the others,” he said.

The minister also responded to a parliamentary question from Non-Constituency MP Daniel Goh relating to the certification system.

Mr Shanmugam said it would be "too quick a conclusion" to suggest that the integrity of the certification system has been compromised, referring to the mix-up of cladding material that was uncovered in the fire at 30 Toh Guan Road that caused the death of a 54-year-old woman.

“But if you ask me to speculate in August as to how this came about, I think it would have been difficult for me to have speculated that it’s because there was a mixture in the warehouse.

"So I think one has got to be careful about jumping into conclusions at this point as to whether the certification system has been compromised because the certification system relies on international systems of repute which are recognised worldwide. And also institutions in Singapore can either rely on those certificates or make sure the testing has been done or test themselves,” Mr Shanmugam said.

“At this stage, we have no evidence or reason to suspect that they have been suborned. I think we will be investigating all possibilities, including whether there have been manufacturing defects and differences between samples and actual material.”

Earlier investigations from the Toh Guan Road incident revealed that the composite panels used as claddings on the building’s external walls were combustible and not certified as Class 0 as required under the Fire Code.

In August, SCDF also issued a public statement that said the supplier of cladding Alubond had mixed up stocks of two models with different fire safety standards and supplied them to 41 buildings, including the Toh Guan Road building which caught fire.