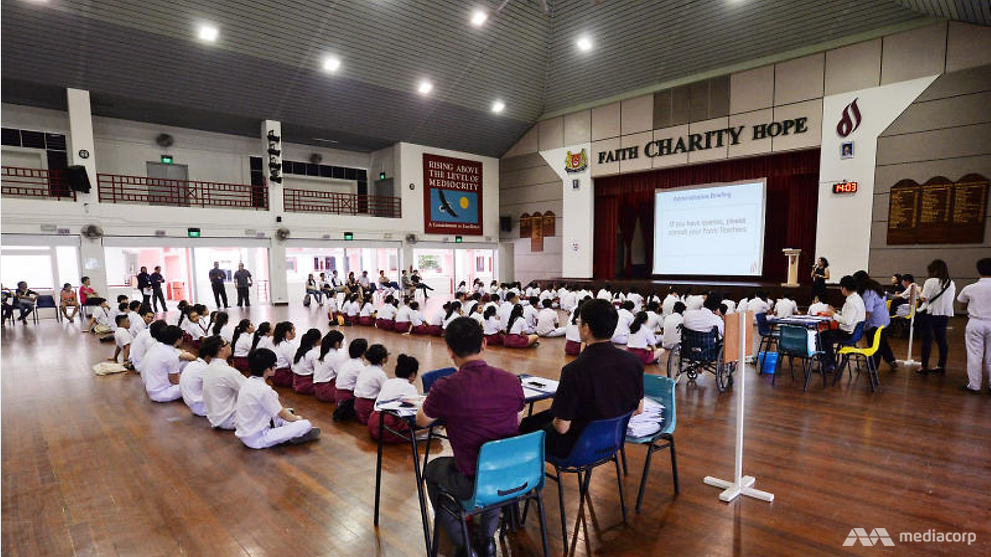 Students at a secondary school waiting for results.

SINGAPORE: Disadvantaged students in Singapore do better than those of similar backgrounds from other developed countries, Senior Minister of State for Education Janil Puthucheary said in Parliament on Wednesday (Jan 10) in reply to a question by Aljunied GRC MP Sylvia Lim.

Ms Lim had asked if the Ministry of Education (MOE) was concerned that a report by the Organisation of Economic Cooperation and Development (OECD), titled Excellence and Equity in Education, found that economically disadvantaged students in Singapore were "significantly more likely to underperform in science compared to their OECD counterparts".

He called Ms Lim's interpretation “factually inaccurate”, saying students from low-income backgrounds had higher PISA scores compared to their OECD peers in all areas of assessment: reading, mathematics and science.

In follow-up questions, Ms Lim highlighted figures in the report stating that Belgium, Singapore and Switzerland were the only three high-performing countries with a below average equity in educational outcomes.

“Is that not an indication that we have a bigger issue to worry about in terms of equity?”

Dr Puthucheary disagreed, saying: "If one chooses that as the measure of equity, which the OECD has chosen to do, then the mathematical result is as Ms Lim has demonstrated.

"However, it does not mean that our lower socio-economic status students are underperforming their OECD counterparts. That is not the case.”

Still, Dr Puthucheary said MOE is focused on this issue because it is important that students from disadvantaged backgrounds are able to overcome their circumstances and do well.

He also highlighted that the same report showed that about half of Singapore students from the bottom 25 per cent of disadvantaged households performed much better internationally than what their home circumstances would predict.

The report defined students in this category as “resilient students”. Dr Puthucheary noted Singapore’s proportion of resilient students is “substantially higher” than the OECD average of 30 per cent in the study based on 2015 PISA results.