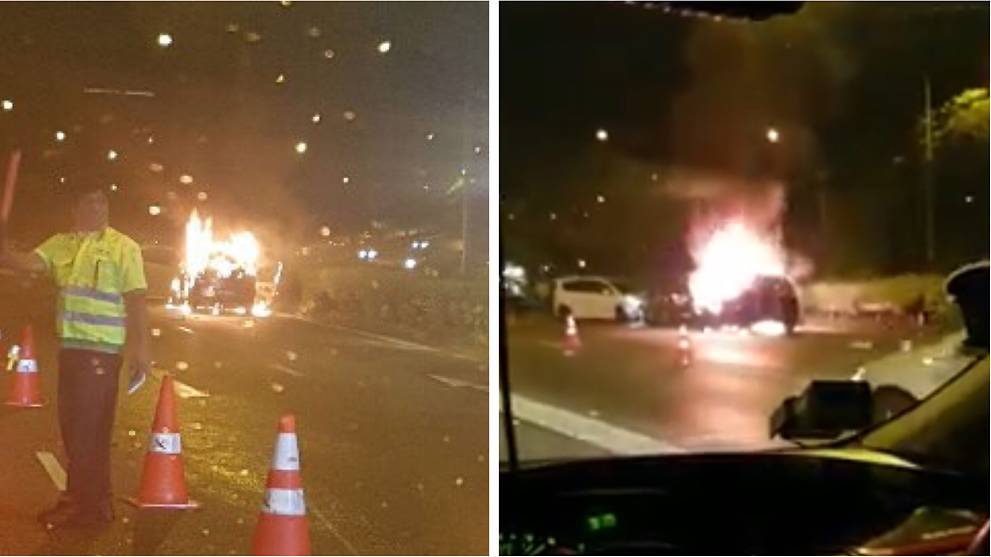 Car bursts into flames on PIE

Screenshots from a video circulating online of the car on fire at PIE on Jan 10. (Screengrab: Facebook/Mohd Irwan Rashid)

SINGAPORE: A car burst into flames on the Pan Island Expressway (PIE) on Wednesday night (Jan 10) following an accident that is believed to involve two other cars.

The Singapore Civil Defence Force (SCDF) said they were alerted to a vehicle fire along PIE towards Tuas after the Clementi Ave 6 exit at 8.55pm, and extinguished the fire using a water jet.

There were no reported injuries, said SCDF, adding that the cause of fire is under investigation.

A video uploaded by Facebook user Mohd Irwan Rashid showed one car engulfed completely by fire on the right lane. Two other cars, which appear to have collided head-on, were just in front of the vehicle on fire.

Mohd Irwan Rashid told Channel NewsAsia that traffic was slow-moving along the stretch of the road where the accident occurred, but that there was no congestion along the PIE.

One of the cars that was seemingly involved in the accident - and situated between the burning car and another white car - was seen to have moderately extensive damage to its back, according to photos posted by Facebook user Benjamin Edmund Yang.

The Land Transport Authority first tweeted of the accident at 9.07pm and told people to avoid lane one on the PIE towards Tuas after the Clementi Ave 6 exit.

Five minutes later, it sent out another tweet, this time informing motorists to avoid both lane one and two.

Accident on PIE (towards Tuas) after Clementi Ave 6 Exit. Avoid lanes 1 and 2

Channel NewsAsia has reached out to the police for more information.