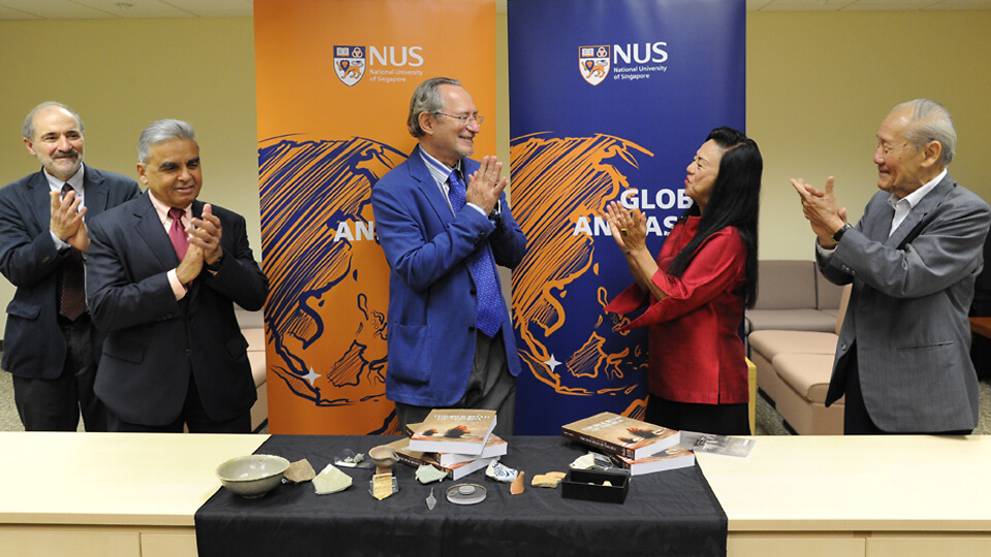 Professor John Miksic (third from left) with the jury panel that selected his book for the inaugural Singapore History Prize. (Photo: NUS website)

SINGAPORE: An archaeologist whose work proves that the Singapore story began a long time before the landing of Sir Stamford Raffles in 1819 was awarded the inaugural Singapore History Prize on Thursday (Jan 11).

Professor John Miksic, who is from the Department of Southeast Asian Studies at the National University of Singapore's (NUS) Faculty of Arts and Social Sciences, won S$50,000 for his book, Singapore and the Silk Road of the Sea, 1300 - 1800.

Published in 2013, the book details the 14th-century port of Singapore, where people processed raw materials, used money and had specialised occupations, according to an NUS press release.

"It portrays a well-organised and prosperous city with a cosmopolitan population that included residents from China, other parts of Southeast Asia and the Indian Ocean.

"Illustrating with more than 300 maps and colour photos, Prof Miksic has presented the history of Singapore in the context of Asia's long-distance maritime trade in the years between 1300 and 1800," it stated.

Singapore and the Silk Road of the Sea was selected by a four-member jury panel from a list of five shortlisted titles. In all, there were 29 submissions by local and international scholars.

The four other shortlisted books were Living the Singapore Story: Celebrating our 50 years 1965-2015; Nature's Colony: Empire, Nation and Environment in the Singapore Botanic Gardens; Sarong Kebaya: Peranakan Fashion in an Interconnected World (1500-1950); and Squatters into Citizens: The 1961 Bukit Ho Swee Fire and the Making of Modern Singapore.

"With this book, Prof Miksic has laid the foundations for a fundamental reinterpretation of the history of Singapore and its place in the larger Asian context, bringing colour and definition to a whole new chapter of the Singaporean identity," said Prof Wang in the release.

"We now know more about Singapore in the 14th century than any other city in the region during the same period.”

Prof Miksic, who according to the NUS Facebook page is curating an online database of ancient artefacts found in Singapore, said he was honoured to win the prize.

"Historical enquiry serves as a basis for us to understand ourselves, our society and the world around us," he said. "Knowing our roots and appreciating our past will also help us better chart our future.

"I hope that the Singapore History Prize will inspire more research, discussion and debate about the history of Singapore, so that future generations of Singaporeans can better appreciate the Singapore story."

Singapore and the Silk Road of the Sea is retailing for S$58 at Kinokuniya and NUS Press and will reportedly be translated into Mandarin by next year.