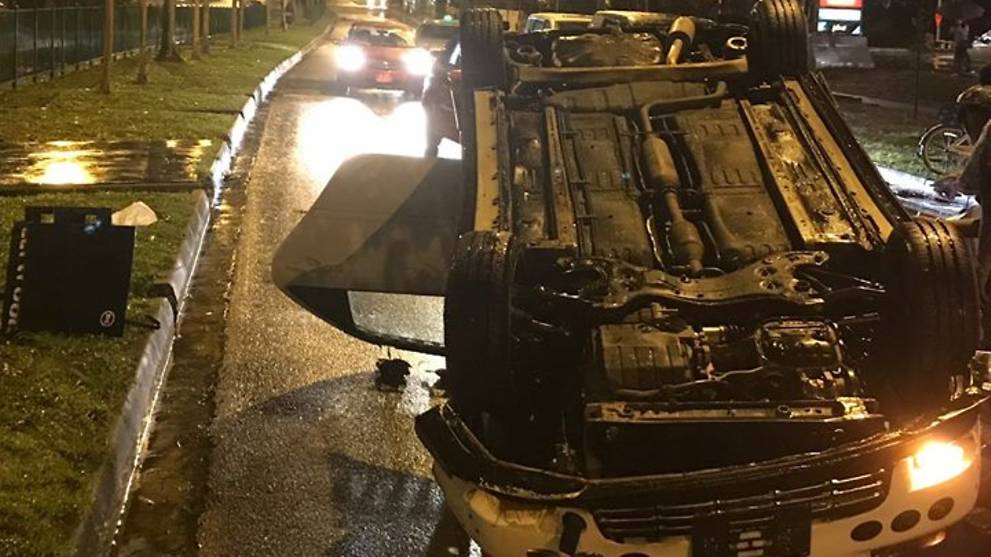 The accident happened after a car suddenly swerved and jam braked, said a Facebook user who said she's the sister of one of the victims. (Photo: Dira Eddy)

SINGAPORE: Two people were injured in an accident at Bukit Batok Avenue 3 on Thursday (Jan 11), after the car they were in collided with another vehicle and overturned.

The Singapore Civil Defence Force said it was alerted to the accident at about 10.45pm, and sent the injured to Ng Teng Fong Hospital.

Both were conscious, Channel NewsAsia understands.

Photos by a Facebook user who said she is the sister of one of the victims show the white car with significant damage on its bonnet and windscreen.

Dira Eddy said in the post that while her brother was driving, a red car in front of him suddenly swerved and jam braked to avoid collision with others.

Her brother, who goes by the name of Ceylon Omerta on Facebook, did not manage to brake in time and his car flipped upside down due to the slippery road, Ms Eddy wrote in the post.

Channel 8 News quoted Mr Omerta as saying that he sustained injuries to his head, feet and hands while his wife had more serious injuries to her head and neck, as well as bleeding around her eye, and was in the intensive care unit for treatment.