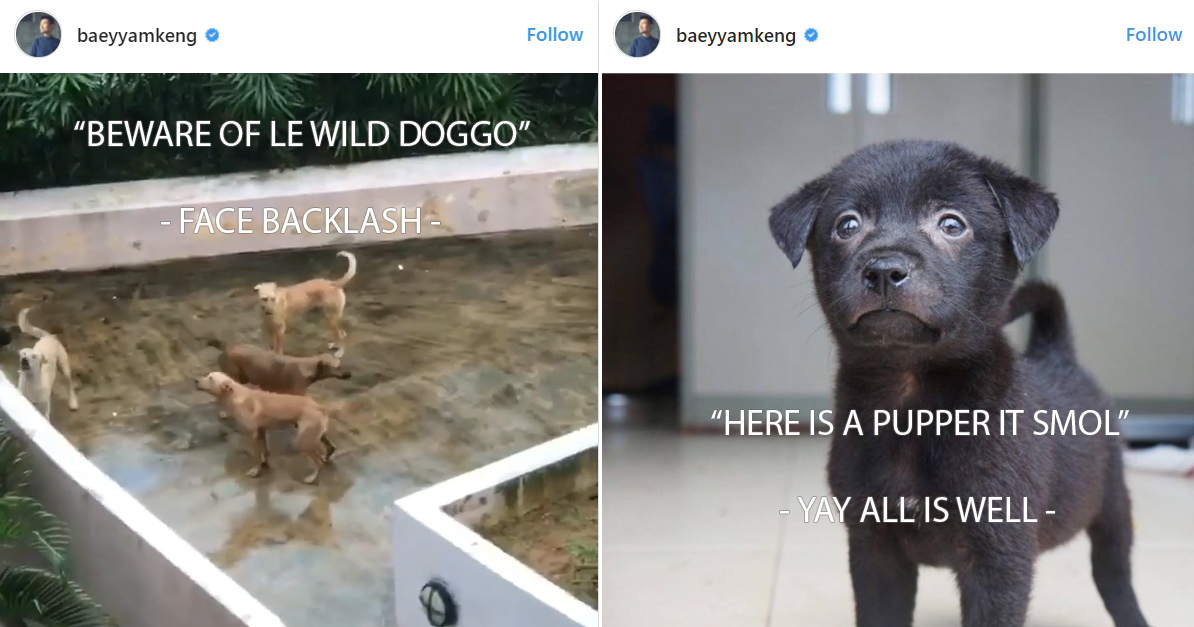 Member of Parliament (MP) for Tampines GRC Baey Yam Keng is the political prince of Instagram.

This is a special year to me as I published my own book! 😀 《一言既出》From the Horse’s Mouth is a compilation of articles I wrote for My Paper and Lianhe Wanbao over four years. I shared observations and thoughts based on my experiences growing up in Singa...

With 18.5k followers, the most metrosexual person in Parliament shines in his personally-curated photos and videos.

So, when the day comes when even Baey faces backlash on Instagram, you know something even more major is brewing.

Turns out, on Jan. 11, 2018, Baey drew the ire of Singaporeans due to an Instagram video he shared showing four dogs barking in the rain at a black cat (on the left standing on the ledge in the video) as a pack at Tampines Street 45.

There have been increased sightings of stray dogs around Tampines Street 45 area. Tampines Town Council had received feedback from residents and reported this to the AVA. If you are concerned with stray dogs around your estate, please call AVA’s 24hr A...

The video was to warn residents about the stray dogs in the neighbourhood.

In his post, he added that the Tampines Town Council had reported the situation to the Agri-food and Veterinary Authority’s (AVA) Animal Response Centre.

He shared “tips” on what to do should one encounter stray dogs and residents who come across the dogs are advised to alert AVA’s Animal Response Centre.

The backlash was swift — an unforeseen development that is almost like the breaking of the covenant for him.

More than 250 comments were posted in response, with the majority questioning the MP’s decision to involve AVA and the antagonistic approach supposedly adopted to deal with stray dogs.

The main fear in alerting AVA is that the strays will be trapped and put down, as this was the approach in the past.

Within six hours of the video post going up and the backlash it courted, Baey put up another post with a lengthy explanation and a show of appreciation — which received a ringing endorsement from fellow MP Louis Ng, an animal welfare activist and colleague.

And most importantly, the post showed a small black puppy, aka pupper or smol doggo, to defuse the tension.

I have gone through all the comments to my previous post and I’m heartened to know that there are many of you who care for the stray dogs. As seen in the video clip which I received from a resident, there are several dogs and some residents will be con...

In this post, Baey said he appreciated all the feedback and felt “heartened” to know that there were so many people who cared for the stray dogs.

He clarified that he had received the video clip from a resident and that the town council had received several emails asking for action.

Baey also assured in the post that culling would only be administered as a “last resort”.

“Please be assured that Tampines does not support culling of dogs,” he said. “We will work with animal welfare groups to foster and rehome these animals. If you know of anyone who can help, do let me know.”

Nee Soon GRC MP Louis Ng, who is also the founder of the Animal Concerns Research and Education Society, personally responded to Baey’s second post — a ringing endorsement if there ever was one.

“I too share your concerns about culling and I’m so happy that AVA will be rolling out a brand new sterilisation programme to manage the stray population,” said Ng.

“It has taken us a long time to achieve this, but a lot of changes have been made in the past few years and a lot of progress has been made. There is lots more to do and I will continue speaking up about this issue in Parliament,” he added.

“I can also assure you that Yam Keng is equally concerned about the welfare of animals.”

And just like that, the issue has blown over and the covenant has been restored.